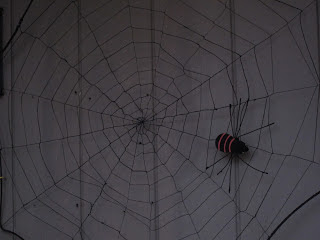 Anyone who follows my musings here on Blogger must know how much I appreciate the works written by E.B. White, who wrote numerous essays for The New Yorker.

I've included copies, and/or excerpts from many of them in my cyber venues. White's also known for the many books he's written, including Charlotte's Web, which is one of my favorites. I have referred to this book a number of times within my blog entries. In fact, the picture atop this posting was included within one of my 2010 Blogger posts where I referenced an excerpt from a collection of White's essays, as well as an excerpt from Charlotte's Web.

If you know Charlotte's Web, you may recall that when one of the characters, John Arable (who is a farmer), discovers a new piglet is a runt, he decides to kill it. His eight year old daughter, Fern, persuades her father to let her keep the piglet as a pet and she names him Wilbur. Fern takes care of Wilbur for a while until he needs to be moved to a farm where he becomes very lonely. He soon is befriended by a spider named Charlotte, who not only keeps him company but also provides him with encouragement weaving the words "SOME PIG," "TERRIFIC," and "RADIANT" into her web.

Words are missing from the spider's web seen in the image atop this entry, and even though there is a bee within this spider's web in this picture, Cam and I could use some words of encouragement.

As you probably know, dear reader, Cam, the female cardinal pictured below (where she is in my rooftop garden in NYC), 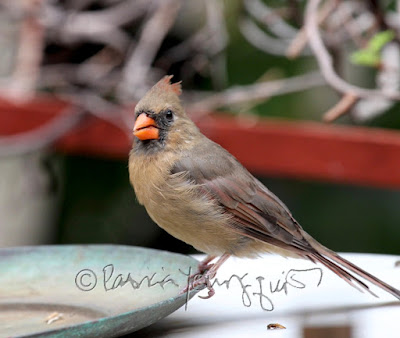 like the spider, Charlotte, is a writer. And, you might also know that I helped her write and publish both the digital and soft-cover version of her book, Words In Our Beak, Volume One. 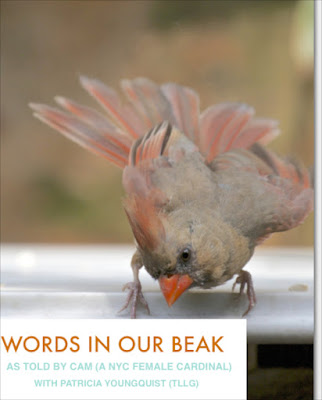 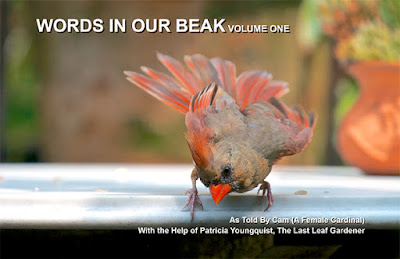 At this juncture she and I are happy to announce that two duplicate copies of our hard-cover version were delivered to me (this past Tuesday which was Halloween) to proof. A picture of the book's cover  can be seen directly below. 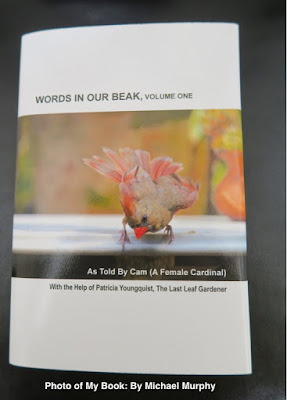 This is a fact which I discussed in yesterday's blog post. However, in order for me to review the book properly, I need to have Chris Deatherage (the book's formatter) go through it with me before I make the book available for distribution in bookstores, speciality shops and on-line.

The book looks good but I'm experiencing feelings of discouragement and could use someone who is like Charolette to spur me on. Maybe I'll feel better after I meet with him which will be today, in the late afternoon. Meanwhile, since today is All Souls' Day, perhaps someone who has gone on from this life, will intercede on my behalf?