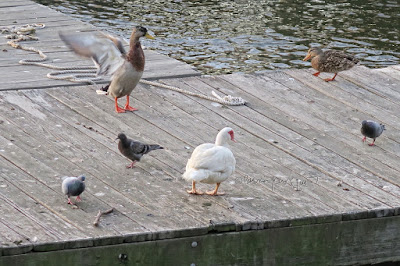 Earlier today, I published a post re some interesting facts that I had learned about a Muscovy duck (who turns out is named Jewel) whom I initially met on Wednesday, September the twentieth, when I spent time on a pier which is on The Hudson River.

Last evening when I went down to that same pier to visit the birds, I saw Jewel on an adjacent pier in the company of Mallard ducks and pigeons, as evidenced in the image atop this entry. While I was there, someone pointed out to me that lots of bread varieties had been dumped in the river as evidenced in the next picture. 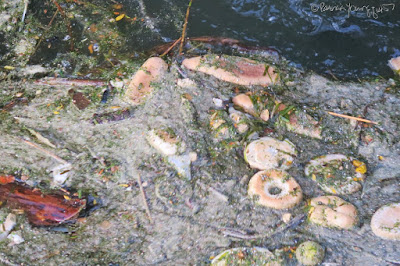 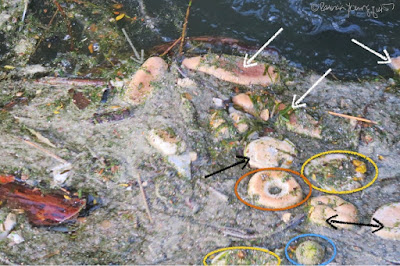 The person who pointed this out to me was deeply disturbed, for she knows how dangerous it is for wild birds to eat most breads.

Moreover, bread is even more harmful to wildlife when the bread is in large chunks, which is certainly the case here. According to a web-page for the WBU, "Bread offered in too large pieces may also cause blockages in birds' digestive tracts. Crop stasis, a condition where the crop fails to empty properly and food ferments leading to secondary yeast infections, can result from bread consumption."

The aforementioned page goes on to say, "The biggest problem with offering bread is that it does not offer proper nutrition to birds. Birds that fill up on bread feel full, but have not obtained the fats and proteins needed for survival. Many of our favorite feeder birds have digestive systems that rely on calories obtained from dietary fats, not dietary carbohydrates, for daily health and survival."

However, it seems the bread that was in the Hudson River waters was not necessarily intended for members of the avian community, rather it was placed (or tossed) there as a result of Tashlikh.

According to "ritualwell," a web-page, "Tashlikh, meaning "cast away," is a ritual performed on Rosh Hashanah (or during the 10 days between Rosh Hashanah and Yom Kippur) as a physical reminder of the human effort to cast away one's sins.... By casting crumbs of bread into the water and reciting the verse from Micah—"cast all our sins into the ocean's depths"—we state our intention to return to our true selves."

However, as you can see, the casting crumbs of bread into the water, was not the case here as it was an array of large bread varieties in their entirety, not crumbs.

But since Tashlikh ends tonight with the onset of Yom Kippur, hopefully there will be no more whole club rolls, whole semolina loaves, whole kaiser rolls, whole bialys, or whole bagels tossed into the Hudson River.
Posted by The Last Leaf Gardener