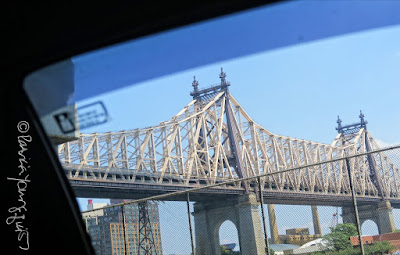 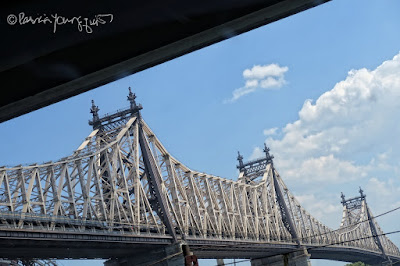 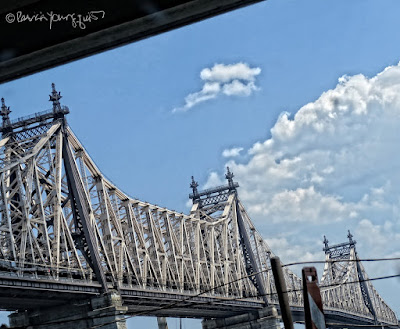 The three photographs which are atop this entry feature various views (from my vantage point of being in the backseat of an automobile that was heading north up the FDR) of what was once known as The Queensboro Bridge. This bridge connects the neighborhood of Long Island City in the borough of Queens with Manhattan. Sometimes it is called The 59th Street Bridge because its Manhattan end is located between 59th and 60th Streets.


This bridge is referenced as The 59th Street Bridge (via an image) in the Simon and Garfunkel song, Feelin' Groovy, which is posted in the You Tube video directly below.

However, for a number of years (ever since 2011) this bridge has had a rename and is now referred to as The Ed Koch Bridge. In the year it was renamed I crossed it as a stoker on a tandem bike when I participated in was my third time doing The Five Boro Bike Tour, and the following image was taken of yours truly with Captain Max. 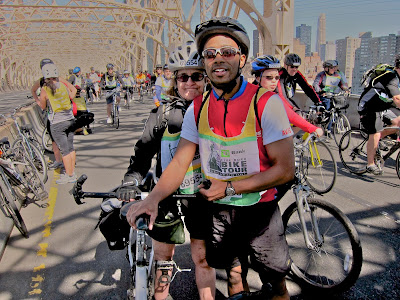 The photograph may look familiar to you, dear reader, as I featured it in a prior post (titled Woohoo! Completed my Third Five Boro Bike Tour, and I'm feelin' groovy. . . ), upon my completion of
that particular Five Boro Bike Tour.

I've tandem cycled across this bridge six times, five of those occasions were as a stoker participant in The  Five Boro Bike Tour, and the sixth time was last Thursday, September 21, 2017, in the evening when ZW (my bike captain and I) did our seventh ride for the 2017 cycling season.

During Five Boro Bike Tour times this bridge is exclusively designated for those participating in the bike tour. However, during non-bike tour times, it is shared by motor vehicles of all types who drive in the center where Max and I are standing in this image. Pedestrians, joggers, scooter-riders, skate boarders, and cyclists all share a narrow path on the the side of the bridge.

Therefore, last Thursday, in the ride with ZW, my experience of crossing this bridge as a tandem stoker was quite different; given the narrow lane designated to cyclists, pedestrians, joggers, scooter-riders, and skate boarders.

The hour in which we were riding made the experience different too as we were able to experience quite a number of phenomenal views of the Manhattan skyline, including the unique way in which The Empire State Building was lit up that night.

It is certainly a good thing that ZW and I got to experience that lovely view if we wanted to feel groovy cycling over the bridge, because we got off to a rough start towards the onset of our journey.

This is because we were riding on the last night of The UN General Assembly, which is a time that I avoid the Eastside of Manhattan, especially anywhere near to The United Nations Building. I'm a stoker and not a captain so I just pedal but not lead the way.

Besides, I thought the entire assembly event at The UN had ended in the late afternoon on Thursday, and was surprised to see that was not the case.

In any event, initially, our ride had started out relatively quiet as we pedaled our way from our starting point in The West Village to First Avenue, an avenue which has a good bike lane that leads to the Manhattan entrance of the bridge.

The fact is our journey north up First Avenue was relatively quiet and smooth; however once we reached the area near to The UN Building, ZW and I were re-routed by the police, and we had to walk the tandem through throngs of pedestrians as well as through traffic jams.

Be that as it may, we ultimately were able to cross the bridge via cycling on ZW's tandem, but upon exiting it in Queens, we came upon an injured woman lying face down on the sidewalk, surrounded by attending medics, but we have (as of this posting), no idea what happened to her.

By the time we arrived at our destination in Socrates Sculpture Park, it had closed for the evening; so  we decided to make our way back to Manhattan before having our picnic, which we usually have at a midpoint during our ride.

But all was far from from lost, for we had our picnic on a bench in front of Ample Hills, which can be seen in the picture directly below (where it is indicated by an arrow that I affixed to it). 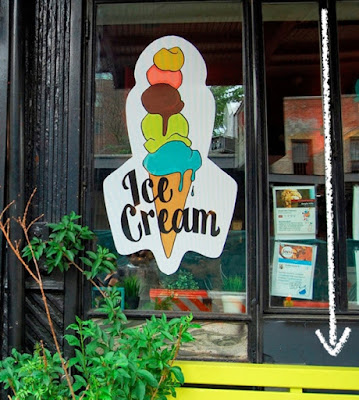 This particular Ample Hills ice-cream shop location is in The West Village, and we ultimately had dessert from their shop. Before last Thursday, I had only been to the Brooklyn location of Ample Hills and that was when ZW and I stopped there during our second ride of the 2017 season, which was this past May.

In any event, I had their ooy gooey butter cake ice-cream (seen below in their image featuring this flavor in a cone). 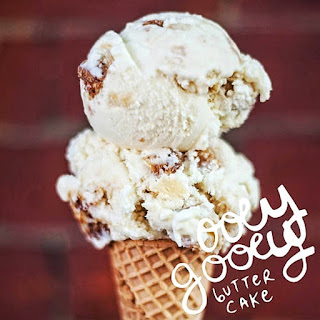 But mine was served in a recyclable paper cup, followed by a glass of Chartreuse (once I got home), all of which found me feelin' groovy.
Posted by The Last Leaf Gardener