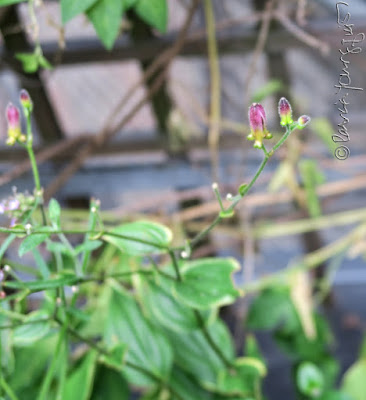 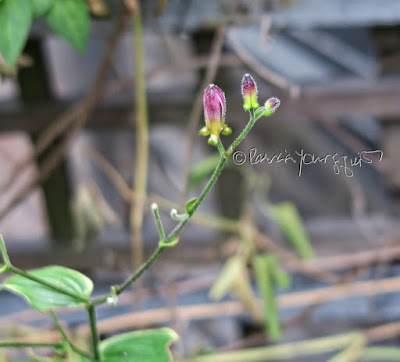 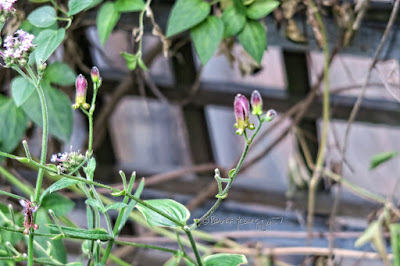 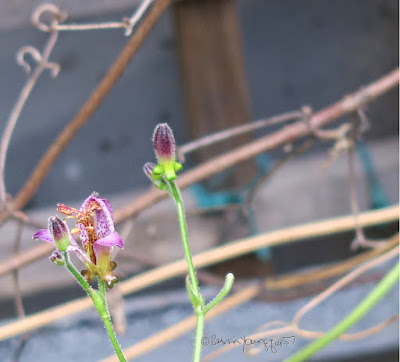 Hello, and welcome to the fifty-first week of my Tuesday's Truths series, where I will shed light on how the plant known as Tricyrtis, came to be referred to as a Toad Lily. Details of the flowers from this exquisite plant (which was recently planted in my rooftop garden by Juan V) can be seen in the images atop this blog entry.

However, before I go into detail re this awesome flower, let me digress a bit, and apologize for not posting an entry for week fifty-three of my Tuesday's Truths series! Unfortunately, the truth for that day, which was August 1st, is that I did not feel well, due to an injury I sustained to my right foot.

Therefore I was preoccupied with the logistics of getting my boot cast to fit properly and other pesky details associated with recovery from my injury! But if truth be told, and it's about to, what I had planned to point out that day was the fact that the beginning of this month of August was a good time to point out that (according to a web-news page) "there are almost 4 million newborns delivered each year in the United States. Of that amount, 9.05% (or 353,000) babies are born in August alone, making it the biggest month for births. July comes in second with 349,000 births, followed by September."

A number of years ago, I was one of those 353,000 born in August. Moreover, I was born on a Tuesday, which, according to the aforementioned source, is "the most common day of the week for little bundles of joy to be delivered is Tuesday. The Centers for Disease Control and Prevention find that on average there are 12,323 births on Tuesdays, with Wednesday and Thursday close behind."

Be that as it may, I admit that this news may not be particularly relevant to those of you who read urban related blogs; but, hey, you never know when the topic might come up in conversation; and you also never know when you might be selected to be on the game show Jeopardy, with details of birth months and days of births being a category worth mega bucks.

And, now that what I would've written on the fifty-third week for Tuesday's Truths is out of the way, I'll move on to my intention for the truth re this fifty-fourth week, and tell you a little bit about the back story of the Tricyrtis flowering plant being nicknamed "toad lily."

According to a post by blogger,  Deborah Elliott, of Deb's Garden, "the genus Tricyrtis, commonly called Toad Lilies, supposedly acquired its unfortunate name as part of a famous hoax, but the beautiful flowers deserve better."

Elliot explains that "The story goes that Manuel Elizalde, Filipino Minister of Culture during the regime of Ferdinand Marcos, claimed that he had discovered the Tasaday tribe, a group of stone age hunters surviving on the island of Mindanao. In truth, the tribe was quite modern, but Elizalde persuaded them to play their part for the sake of ecotourism. They even duped National Geographic. The magazine featured the Tasaday in an article in 1972, titled 'The Last Tribes of Mindanao.' Eventually the tale was debunked, and in 1986, a 20/20 special highlighted the hoax in a documentary, 'The Tribe that Never Was.'

"The stone age tribe reportedly depended on toads as their main source of protein. They crushed a certain plant and rubbed their bodies with its sticky juice, which attracted the toads, who then were easily caught in the gummy substance. None of this was true, but the poor plant came to be called Toad Lily, and the name persists to this day."

In terms of these exquisite toad lilies having a home in my garden, I came upon them when looking for flora to replace my Russian Sage, for even though Juan only planted the sage on July 20th, it was already trying to take over the container which has been a long time home to my Sweet Autumn Clematis.

As of this posting, my Russian Sage has been moved to my neighbors' garden, and one of my four Toad Lilies has been planted (see the next set of images). 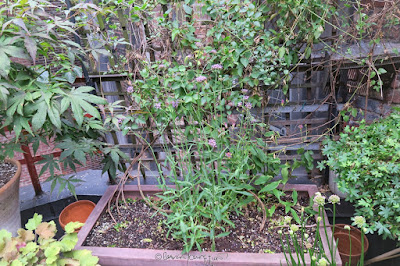 It may be hard to detect the toad lily to detect the toad lily plant in the image directly above, so I've indicated the plants exact whereabouts (with an egg shape) in the picture immediately below. The double sided arrow directly in front of the egg shape marking, as well as the double sided arrow to the left of that oval shape, indicate where Juan V will be planting three more toad lilies some time this afternoon.

The single-tipped arrow is pointing towards the pot being reserved for a curry plant. The numbers that have been placed atop this image, are to give you a sense of what's in close proximity. Numeral one is indicating my 'Tamukeyama' (AKA Japanese Maple), numeral two is referencing one of my Heuchera plants, numeral three references my Verbena bonariensis (a plant which I wrote about in a previous post), number four is alongside my onion flowers, number five is atop my geraniums, while number six indicates a very partial view of my Autumn Clematis. 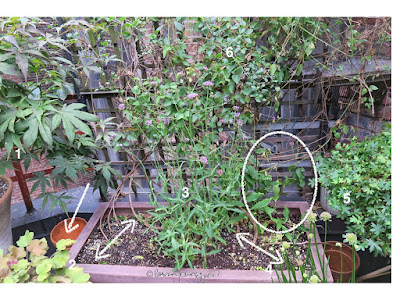 The most recent aerial view of my garden was taken this past August 3rd and is featured in the next two pictures. 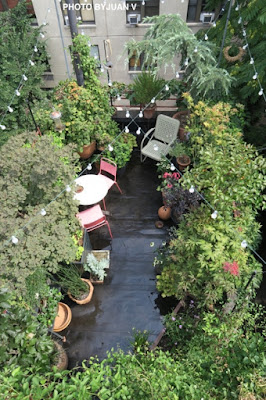 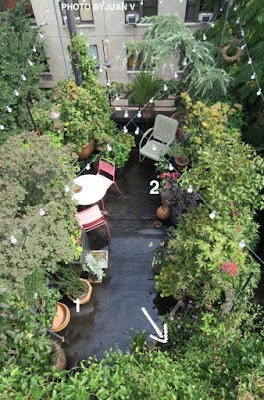 In the latter picture the arrow is referencing the flora I've just discussed but in this view it is hidden by the lushness of the flora. Numeral one in this picture is indicating a newcomer to my garden, a plant known as a Horsetail. Close-ups of this newbie to my place can be seen in the next few pictures. 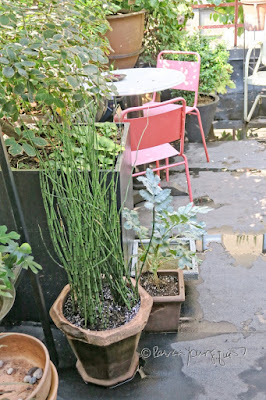 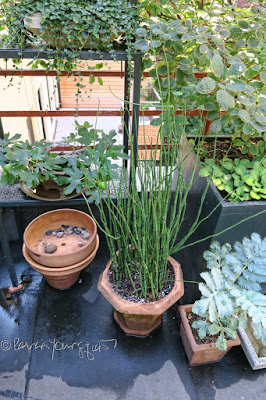 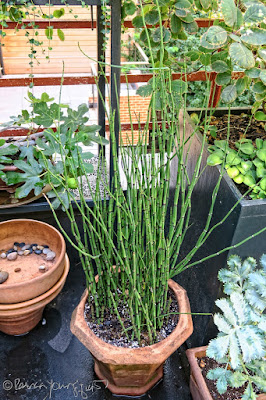 As you can see, the horsetail has an architectural appearance. In terms of what's being indicated by the numeral two (second picture of aerial views), that's a Crepe myrtle!

Crepe myrtles are chiefly known for their colorful and long-lasting flowers which occur in summer. Mine is bearing ones with fuchsia coloring, seen in close-up format in the next pictures. 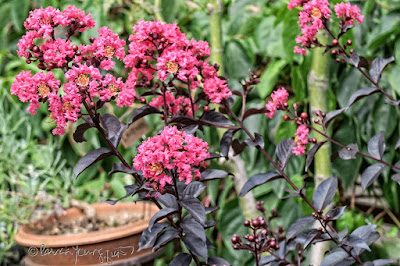 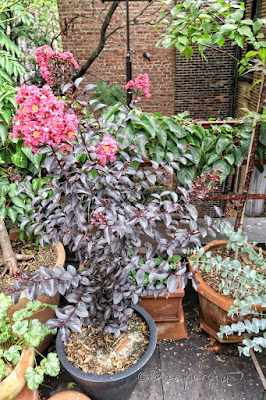 However, we had extremely heavy rains yesterday, and they put stress on this tree's branches causing it to bend (as seen below) I pray it doesn't break off! 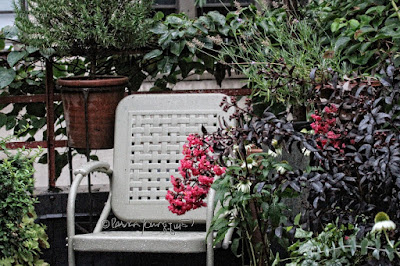 In any event the Crepe myrtle lost a lot of flowers as evidenced in the next images, where a lone mourning dove can be seen; and he didn't do much singing in this heavy rain! 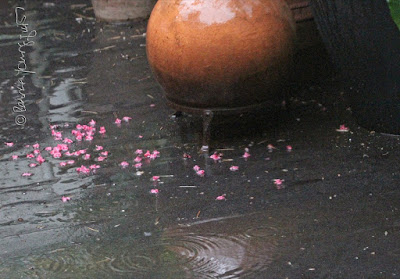 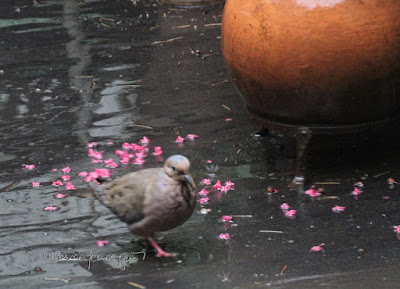 That's it for now, re Tuesday's Truths for weeks fifty-three as well as fifty-four, so please stay tuned to see how my crepe myrtle survived the heavy rains and to hear some stories of what's been going on with the array of wild birds who have been spending so much time here!
Posted by The Last Leaf Gardener