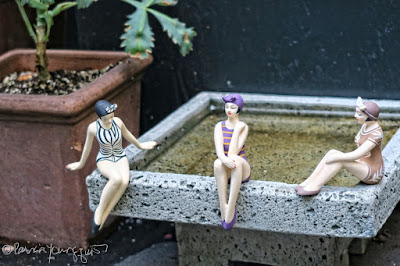 The bathing beauties pictured atop this entry posed for a photo shoot by sitting atop a bird bath in my urban garden.

All of them came to me through the generosity of my dearly departed friend, Donna De Solis, who loved spending time sitting outside at my place. Therefore, in her honor, we did our photo shoot outdoors.

Normally these bathing beauties stay inside my apartment and spend their time within the confines of my indoor succulent garden (two of them can be seen doing this during bygone years in the next set of images). 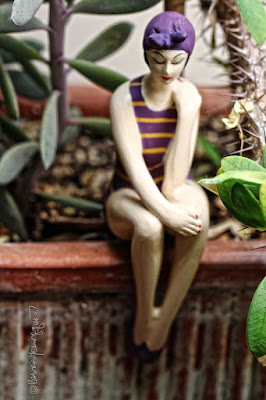 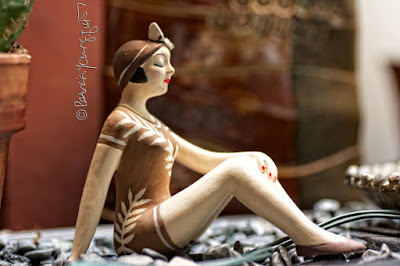 These bathing beauties are working on their tan before the arrival of a feisty group of beach loving visitors who are coming to NYC from Skippack (Pennsylvania).

Their trip has been made possible by Art and his wife Jane (who took the following picture of our anticipated guests). 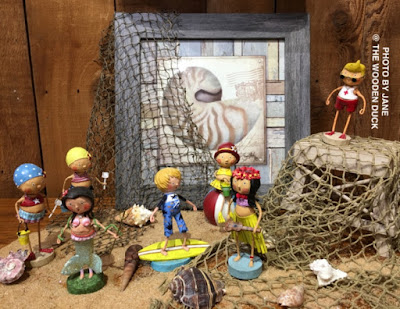 These "cast of characters" look like a delightful, fun loving, bunch of "beach bums" and will be most welcomed by me for I am truly missing the beach!

This past May, I vowed that the Summer of 2017 would be when I would finally get to a beach at least once a week. It is fairly easy to get to a number of beaches from where I live on the UWS of NYC, and for a number of years I've told myself that I need to take advantage of this opportunity.

The Long Island Railroad (LIRR), which I can get at Penn Station, is usually a very easy way to get to a number of beaches on Long Island. And Long Island "has some of the most beautiful beaches in the world," which are made even more enjoyable by the annual LIRR Beach Getaway Packages. Some include a ferry ride others include waterfront dining, and some include opportunities to go fishing.

Unfortunately, my hopes of heading out to a beach on Long Island were dashed in early June when  an announcement was made that "more than two dozen rush-hour trains on the Long Island Rail Road would be canceled or rerouted at Pennsylvania Station in New York this summer as commuters brace for a 'summer of hell'"

However, beaches within day-trip distance are not limited to Long Island!

There are a number of beautiful beaches in New Jersey, which was my alternative plan, until the aforementioned announcement went on to proclaim that "All three railroads that use Penn Station — which also include Amtrak and New Jersey Transit — would be cutting back service this summer amid construction that will close off tracks for repairs."

I still held out hope for a chance to go to a beach because a number of city beaches are accessible by subway. But subway riders, have grown increasingly frustrated with faltering service, were impacted to with massive delays, cancelled transit lines, and there was a derailment at a station near to beaches in Brooklyn.

My tandem cycling captain and I planed a summer solstice bike trip to a beach in The Rockaways, but it had to be rescheduled for a day in July. On the day we planned to make the trip there was heavy rainfall and we had to postpone it once again.

We are now in the second week of August and I have not been to the beach! Moreover, I've injured my foot and need to wear a boot cast until at least August 22nd, possibly longer. But I'm taking heart for the announcement about the "NYC summer from hell" did claim that there would be an end in sight, saying, "the track repair work at Penn Station is expected to last about eight weeks, through the end of August."

If that is true my foot should be healed by then and I would be able to go the beach! After all, the official 2017 season of summer does not end until Friday, September 22nd.

In the meantime, since I can't go to the beach, I'm bringing it to me, courtesy of Art and Jane; which brings me to Wednesday's Wisdom with a REVERSE take on the the adage ''If the mountain will not come to Muhammad, then Muhammad must go to the mountain" (from the story of Muhammad, as retold by Francis Bacon, in Essays, 1625):

"Mahomet cald the Hill to come to him. And when the Hill stood still, he was neuer a whit abashed, but said; If the Hill will not come to Mahomet, Mahomet wil go to the hil."

According to a web-page, "present uses of the phrase usually use the word 'mountain' rather than 'hill' and this version appeared soon after Bacon's Essays, in a work by John Owen, 1643: If the mountaine will not come to Mahomet, Mahomet will goe to the mountaine."

It's good wisdom to note that if one can't go to the beach, one can bring the beach to themselves. For I am certain, dear reader, that Art and Jane can make travel arrangements for their beach bums to visit your home.