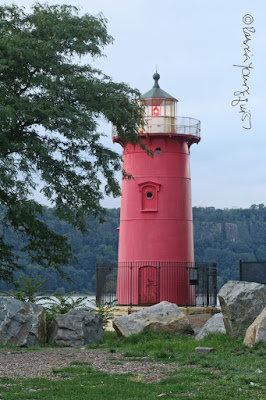 Today, August the seventh, is the first Monday in 2017's month of August, and it happens to coincide with National Lighthouse Day. Therefore, in honor this unique holiday, I'm offering some thoughts.

According to Wiki, "on this day in 1789, the U.S. Congress enacted legislation allowing the federal government control over the creation and maintenance of lighthouses.  This special holiday evolved out of this event, and in recent years, through efforts to preserve lighthouses as a important historical symbol in America."

Wiki goes on to proclaim that "National Lighthouse Day honors and commemorates a beacon of light that symbolizes safety and security for boats at sea."

And they explain that "throughout maritime history, Lighthouses have shined their powerful, sweeping lights through the fog and storms, allowing ships of all kinds to find their way back to port during inclement weather. With the advent of radar and GPS technology, lighthouses have taken a back seat in guiding ships to port. However, they remain the universal symbol of safe harbor to ships and communities that rely upon the sea for their livelihood."

In bygone years on Blogger, I've written about this holiday, and I've also discussed a few of the lighthouses which I've been able to visit; including The Little Red Lighthouse seen in the image atop this entry. This lighthouse is located on the Hudson River in NYC. I've been to it on many occasions when I've participated in tandem cycling. And the last time that I cycled to it (which was this past July for my fifth ride of the season), I noticed that the light was on, which is something that I don't recall ever seeing at this particular lighthouse.

My only memory of seeing a beacon of light coming from a lighthouse is the one I've seen coming from The Fire Island Lighthouse in the town of Kismet on Fire Island. The following pictures show this particular lighthouse (with its light on) from two vantage points. 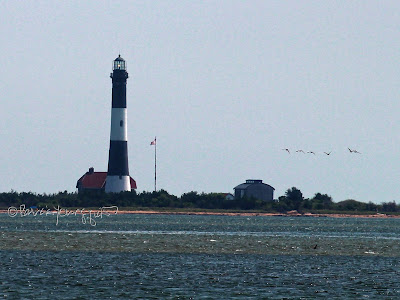 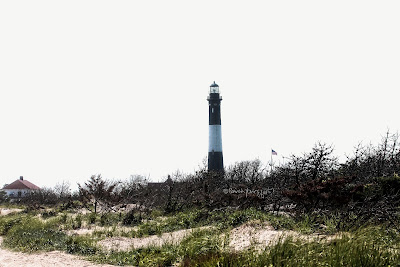 These images might look familiar to you, dear reader, as I've included them in my cyber venues when discussing The Fire Island Lighthouse.

But today, what I'm being reminded of (in relation to both The Little Red Lighthouse and The Fire Island Lighthouse having their beacons shine), are Motel Six commercials with Tom Bodett promising that. "We'll leave the light on for you."

Another thing I'm thinking of re lighthouses and their shining beacons is an Anne Lamont quotation: “Lighthouses don’t go running all over an island looking for boats to save; they just stand there shining.”

There you have it dear reader, some info and asides on lighthouses, should you find yourself in a situation where National Lighthouse Day is being discussed.
Posted by The Last Leaf Gardener