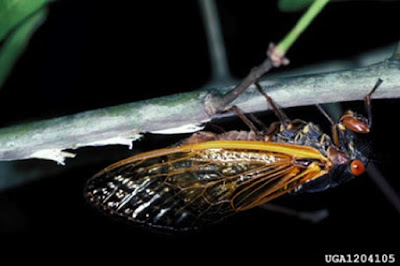 The insect featured in the photograph atop this entry is a cicada. This image is from a web-page for Home Depot's Garden Club. The aforementioned page has this to say about cicadas:

"If you live anywhere from the Midwest to the East Coast and you’ve ever been outdoors in spring, chances are that you have heard the distinctive sound of the annual cicada. The tinny buzzing sound seems to go on forever, but it really only lasts for a few weeks in late spring. This year though, the love song of the cicada will become a deafening roar for people from North Carolina all the way up to New England when billions of the Brood II Magicicada species emerge from deep beneath the earth for their time in the sun – an event that only happens once every 17 years."

This page has many interesting facts re the insect, so please click here if you want to read more.

Meanwhile, dear reader, let me leave you with what E.B. White wrote about cicadas:

"At eight of a hot morning, the cicada speaks his first piece. He says of the world: heat. At eleven of the same day, still singing, he has not changed his note but has enlarged his theme. He says of the morning: love. In the sultry middle of the afternoon, when the sadness of love and of heat has shaken him, his symphonic soul goes into the great movement and he says: death. But the thing isn't over. After supper he weaves heat, love, death into a final stanza, subtler and less brassy than the others. He has one last heroic monosyllable at his command. Life, he says, reminiscing. Life."
Posted by The Last Leaf Gardener