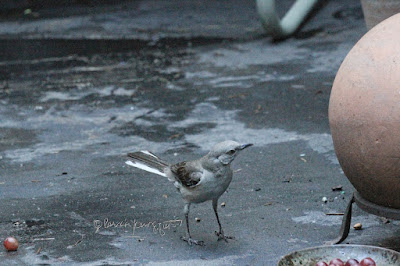 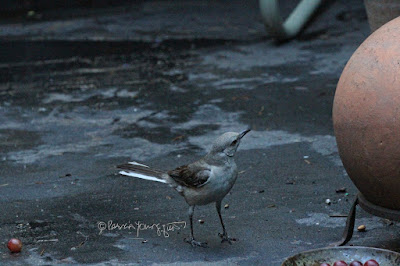 A Northern mockingbird, who appears to be checking out a ball-shaped terra-cotta object which is on the floor of my rooftop garden, is featured in the two images atop this entry.

The object of this bird's interest is an upside down planter that is better suited as an outdoor sculpture than the planter it is supposed to be. This is because it is very difficult to plant flora inside of it. You might suspect this from seeing the next image, which was taken in 2011, and features creeping thyme attempting to thrive in the round container. 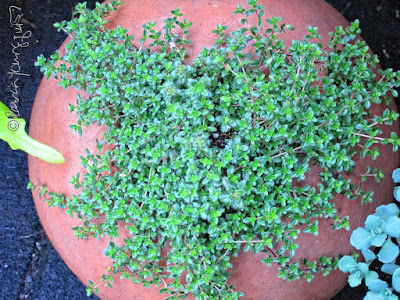 In any event, to the mockingbird's right (or left in the first two photos) is a grape that has rolled off a saucer of grapes (which can be seen near to the container).

An imaginative person, upon seeing the mocker staring at the terra-cotta object, might envision that the mocker thinks the round structure is a huge grape. Whatever this bird may or may not be thinking, remains private with him/her, for he/she has not revealed any thoughts on the matter.

Admittedly, the two top photographs are quite similar, but they are not identical. The gaze of this mocker is slightly different from picture to picture, the same holds true for the next sets of photos. 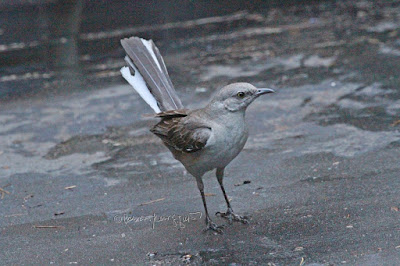 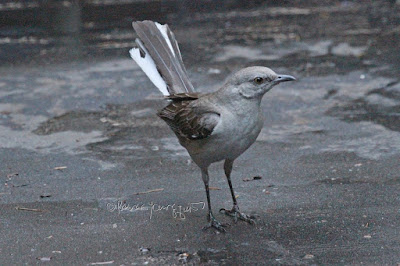 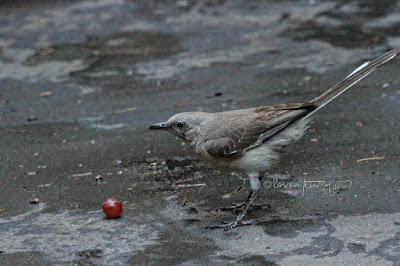 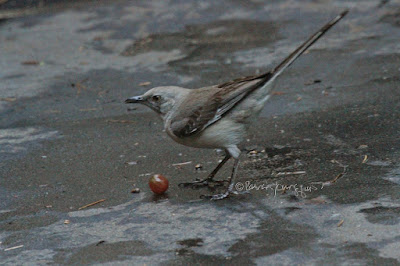 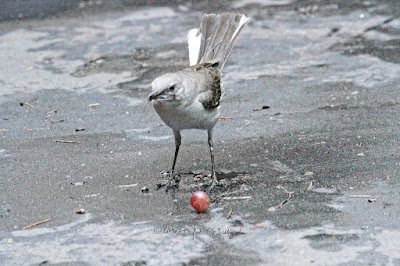 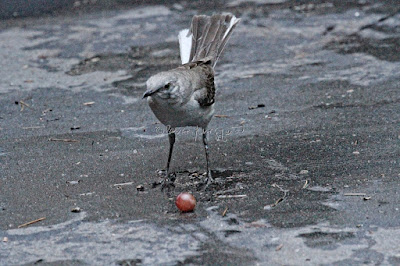 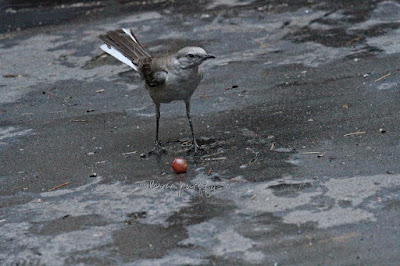 I was fascinated with the mockingbird's reaction to his/her discoveries, as I often am, when I see a given creature's reactions to new surroundings. And I believe that my fascination with such "wonders," is evident by my taking nearly identical views of each action I notice the mocker doing.

I suspect that my photographing his/her nuances is not too different from that of a parent observing and taking pictures of his/her child coming into contact with new situations.

While I have not had a child, I'm well aware of  the reaction of parent's observing (photographically) their young one doing most anything. This is evident to me by the vast number of photos they post on social media (which often feature a number of nearly identical pictures of their young one in an array of activities).

But not everyone is appreciative of parents who do this. Recently I came across a number of sources criticizing parents for posting too many images of their child, and, I was bit surprised to discover such backlash.

In an article for Parents Perspective, Chrisanne Grise, states the following:

"... One of my friends posted three separate batches of photos of her toddler yesterday. There were photos from a sledding adventure, photos from afternoon playtime, and then some mom-and-son selfies to end the night. Another friend, who is a single mother, filmed her daughter opening all her Christmas gifts this year, rather than putting the camera down and experiencing a special holiday moment just between the two of them. And my own 4-year-old niece never lets us take pictures of her anymore, because she's sick of her mother following her around with an iPhone. .... It saddens me that they spend so much energy documenting every move their child makes, rather than quietly savoring some of it...."

And in an article from the partners at BabyCenter, the writers state the following:

Hey, he's trying to do a somersault.

It goes on and on. These are all things that make me grab my smartphone and start clicking away.

But am I missing out by doing this? I think the answer is yes.

Moreover, in an article for The Telegraph, Tanith Carey, writes this:

Hallelujah! Two-year-old Ben has just eaten a mouthful of yucky carrot cunningly disguised as a face on his lunch plate, now for all to see on Facebook. Meanwhile, under the Twitter hashtag #whatamess, Eliza, three, is just this minute enjoying an ice cream at the park. While an Instagram pic of eight-month-old Theo’s peachy bottom is all the evidence needed that his nappy rash is much better, thank you.

Once upon a time, long before social media, I confess that I had very similar feelings to some of the ones expressed in these articles. However, my feelings had to do with my mother spending all her time behind her Kodak Instamatic photographing my sisters and me as a way of re-writing what was actually happening.

In one of my Blogger entries, Thoughts on the Creators of Photo-Albums, which I published in December of 2010, I wrote about my mother's motives.

"In some respects these (photo-based) cards are more her memories than mine, as are the scrapbooks she made to preserve memories of our family life. For with the exception of the photograph above (included in the entry I'm referencing) which she asked someone to take of us, she was the photographer that documented our lives —obviously from her perspective — even though she proclaimed what she saw through the view-finder of her plastic camera, the Kodak Instamatic, was what we (my sisters and I) were thinking and feeling."

However, only six months later, on Mother's Day in 2011, I had a change of heart regarding my mother taking so many pictures of my sisters and I as we were growing up. I even wrote a blog entry on the subject. It's titled Lessons Learned in the Garden on Mother's Day (Mother may know best.)

I began that post with the following photo of my Paeonia suffruiticosa (Tree Peony). 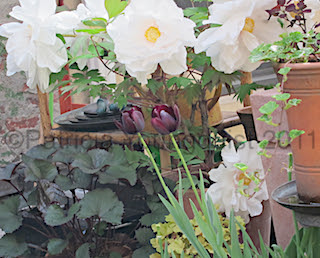 And I stated the following:

"It is Mother's Day, and my seeing my Paeonia suffriticosa (Tree Peony) enjoying its friends is cause for a pleasure to be shared — probably like a pleasure mothers have in taking photographs of their children and sharing them proudly with anyone and everyone who is kind enough to view them — as you are, dear reader, in viewing my chronology of this season's Paeonia suffriticosa and other things that are flourishing in my urban terrace garden.

My Paeonia suffriticosa is truly enjoying her friends, as evidenced in the photograph posted above, which shows a view of the most southwest corner of my terrace garden. It appears to me that (one of the flowers on ) my Paeonia suffriticosa is bending down, to give my Fancy Leaf Coral Bells aka Heuchera 'Marmalade' a kiss; a kiss much like the kiss I gave my sister soon after she was  born, and a gesture that inspired my mother to take the photograph posted below of yours truly with my younger sister... 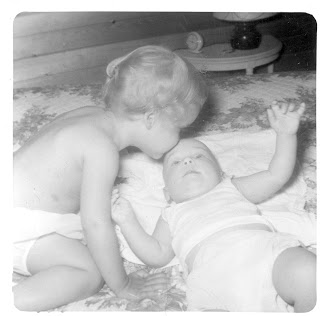 ... My Paeonia suffriticosa isn't always this loving toward her comrades, and they surely need to wait until she wipes the sleep from her eyes — an image I captured when she wasn't looking (seen below) before she gives them any kisses. 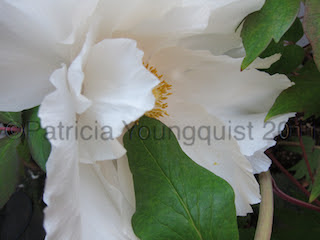 This image of my sleepy-time friend (peony) really makes me think of my mother, who constantly had a camera in her hand during my early years of childhood, and took pictures of my sisters and me doing anything and everything,

Even though it seems I have many photographs of my garden, the fact is I don't alway enjoy taking pictures of it because I am too busy just enjoying the moment of my herbs, plants, shrubs and trees that bring such light to my life, something I often wished my mother would have done that instead of being behind her Kodak Instamatic.


But, on this Mother's Day, I've learned something, and like my flowers, I've grown too. What I have learned is this: while indeed sometimes the camera can be a barrier between a photographer and his/her subject, when I see the pictures coming into my computer from my Memory Card, I am thrilled — reliving the joy I captured. So today, I give out a shout to my mom — and to all moms who spend time behind the camera, capturing relationships and preserving memories for all time."

I'm grateful to the flora I grow in my garden as well as to the members of the fauna community who come to visit for making me aware of the simplest nuances in life. And I appreciate that they have not complained about my being behind the camera on so many occasions.

Having said that, I do admit that there are times I's rather just be in their (flora and fauna) presence without the barrier of a camera, and so I do this from time to time. But on those occasions, I often end up wishing I had photographed the moment!

So... for those who complain they have too many photos because of digital, here's an easy fix: just delete them, or put them on an external. Meanwhile, enjoy the subtle differences in seemingly like photos as they can give you a sense of the nuances in the behavior of whomever you happen to be photographing. 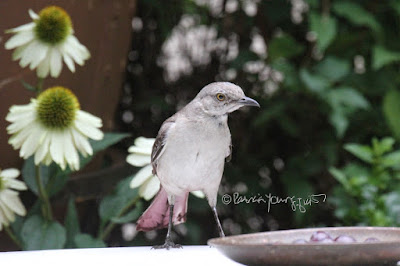 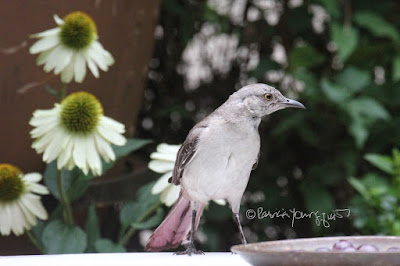