Tuesday's Truth, The Thirty-Second Week: STELLA, a "bombogenesis" is for the BIRDS! 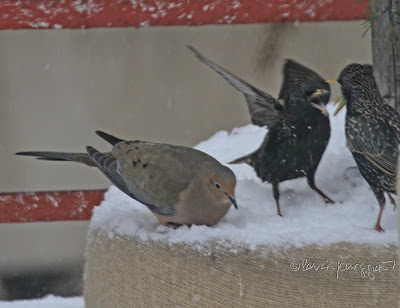 We are currently having a Nor' Easter style winter storm that has been named Stella; and she has received the distinction of being called a "bombogenesis" storm!

According to weather.com, to be considered as a bombogenesis, a given storm must be known to have "rapidly intensifying area of low pressure."

And, weather.com also states that another criteria to be classified as a weather bomb, "is that the central pressure of a low-pressure system must drop at least 24 millibars within 24 hours." This source points out that, "at 8 p.m. EDT Monday (last night) the central pressure was 1007 millibars, and as of 3:30 p.m. EDT Tuesday (today when the storm took place) the pressure had dropped to around 976 millibars. This equates to a pressure drop of 31 millibars in only 19.5 hours, easily exceeding the requirements for bombogenesis."

In NYC, where I live, schools were closed and certain forms of public transportation were suspended as a result of the storm. However, folks were given a few days warning and many of them heeded it, as evidenced by the long lines just to get into many a grocery store.

The mayor urged people to stay put once the storm began to take place. However, not everyone followed his plea, especially the birds that visit my rooftop garden. I'm not naming names re who failed to comply with the mayor's request, but I will say that they included a large number of European starlings (a few of them can be seen in the picture atop this entry) along with a lone mourning dove.

I'm not sure why the storm was given the name of Stella, but, as you may surmise, this sparked a lot of Marlon Brando clips being uploaded to various social media platforms.

After all, it's hard to not reference his famous yelling "Stella," to his wife (Stella Kowalski) in his role of Stanley Kowalski for productions of Tennessee Williams' play and movie, titled A Streetcar Named  Desire.

In any event, you can see that this Stella-Brando reference is not lost on my prolific birds! One of the starlings pictured above is reenacting Brando's Stanley Kowalski, and yelling "Stella." European starlings are known for their skill in mimicking, and I must say this starling nailed Brando!

The mourning dove is also quite well read and while the starling focused on Stanley Kowalski, she focused on Blanche Dubois (Stella Kowalski's sister); for as she munched on the suet that fell from the feeder, she quoted Blanche saying, “I have always depended on the kindness of strangers.”

Meanwhile, another starling, took a more whimsical approach to the bombogenesis storm and sang the lyric lines, "Walking in the winter wonderland," as he "walked" in the somewhat deep snow on my garden's surface, as evidenced in the following pictures. 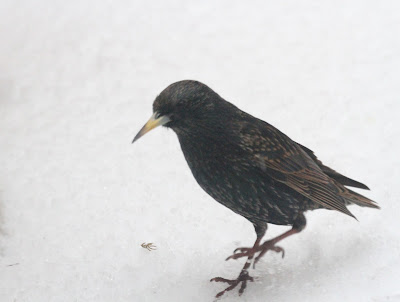 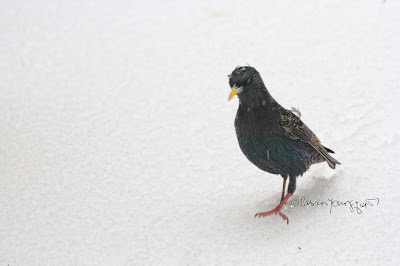 As I said, there were numerous amounts of starlings, but the one pictured above, was not the only one to sing, "Walking in the winter wonderland," a lone American Robin did the same thing as seen below! 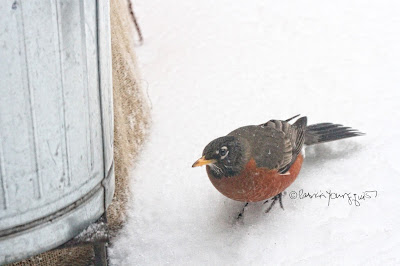 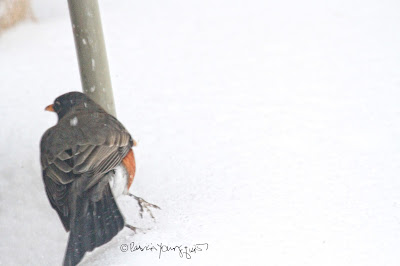 Moreover, all of the starlings, as well as the lone robin, enjoyed the grapes that I provided for them. When folks say to get bread, milk, bottled water and flashlight batteries in preparation for a storm; I make sure to have wine and spirits as well as coffee on hand; but mostly I make sure I have food in my bird feeders as well as grapes. Grapes are a fruit robins and starlings truly enjoy as evidenced below. 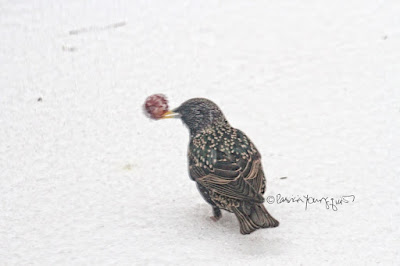 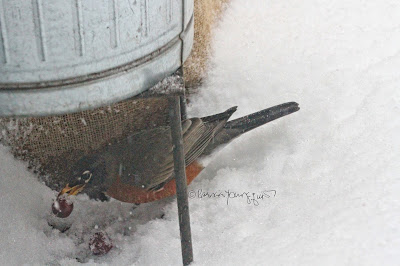 Usually, the Northern mockingbird who visits me eats a lot of grapes, but today he/she did not. I don't  know if that's because the starlings were so aggressive, or, if it was because he/she was too cold and decided to go for more fatty food, my insect suet, as seen below. 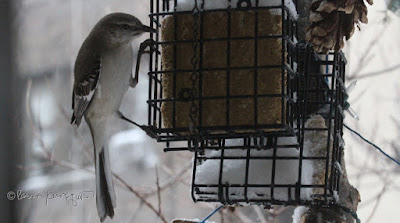 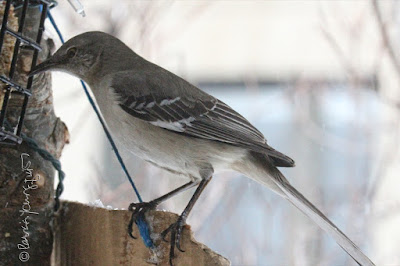 He/she didn't seem to be as puffed up, which is what birds do top keep warm, but maybe the insect-suet provided insulation from the elements.

However, this sweet bird did crouch under my door for many hours during the storm (as seen in the following picture). 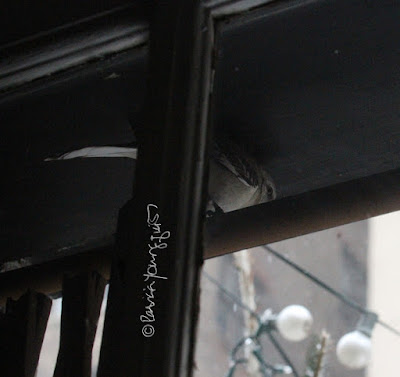 Other  birds who spent time here throughout the "bombogenesis" storm included a lone dark-eyed junco, 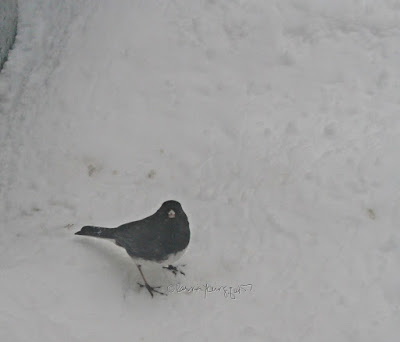 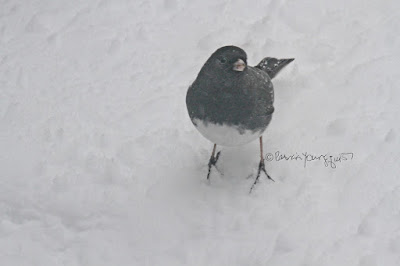 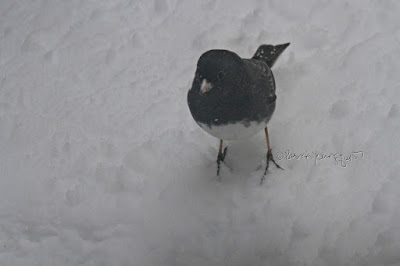 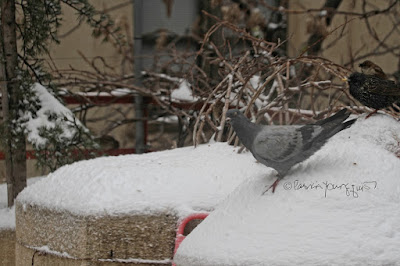 a number of house sparrows, 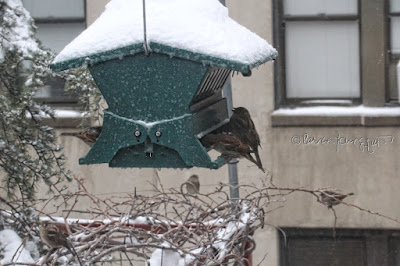 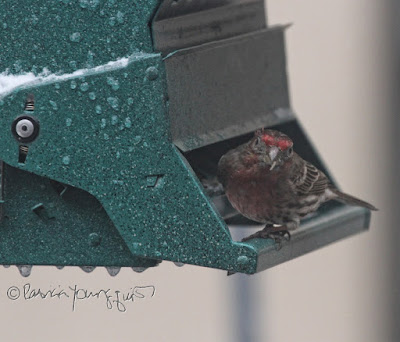 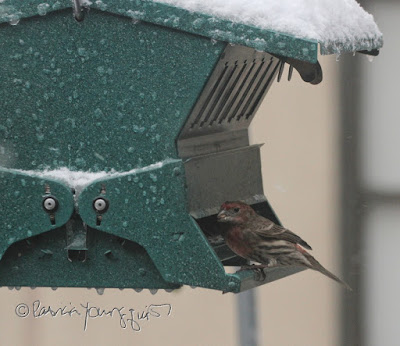 And that's it, re those creatures who did not heed the mayor's advice to stay put, but instead visited my garden! I'm so glad they came here as their presence helped me to weather the storm!
Posted by The Last Leaf Gardener