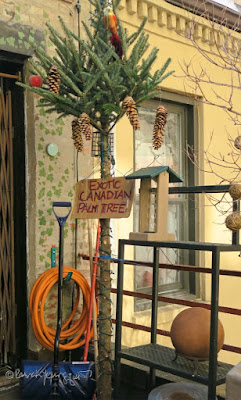 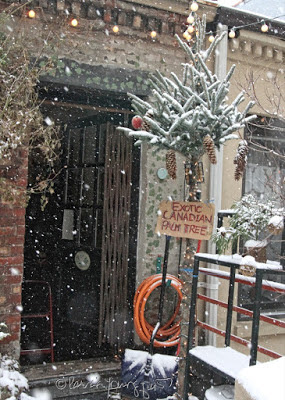 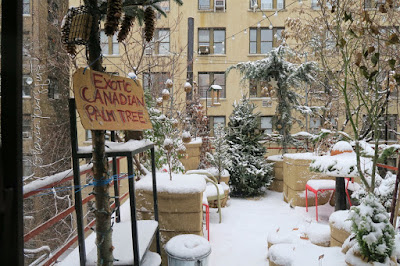 The images atop this blog post have to do with an exotic Canadian Palm tree that I've had in my rooftop garden since Christmas time. The first picture is one that you may recognize as I included it in a prior entry here on Blogger, and it was taken before any snow fell for the 2016-2017 winter season.

You might also recognize the second and third photographs as they are included in an entry here on Blogger that I published this past January. The "traditional" Christmas tree seen in the third image (towards the top in the center) was taken down in February, but my Canadian Palm Tree is still standing in the southwest corner of my rooftop garden.

I got both of the trees from Sébastien, who can be seen in the image below, 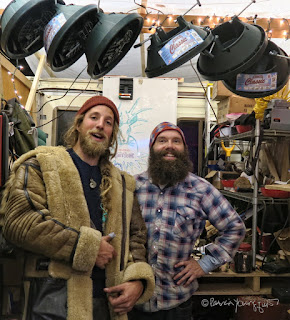 on the left side of the photo, and he proclaimed that the Canadian Palm tree along with all the (Christmas trees he sells) is Gluten Free. 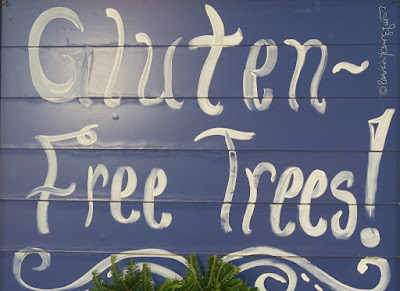 The trees were delivered to me by way of his cart, 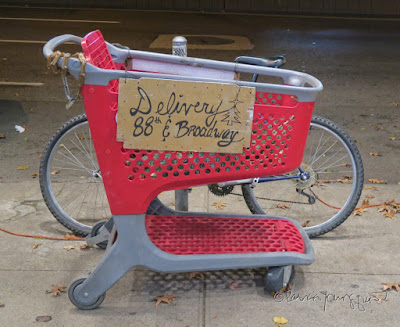 and I requested that he leave the tag (stating EXOTIC CANADIAN PALM TREE) intact. My request has proven to be good for my visiting birds, for a number of them have used the palm tree's tag as a place to perch while enjoying suet from a basket-like bird feeder that I've hung on that tree, as evidenced by the photos below. 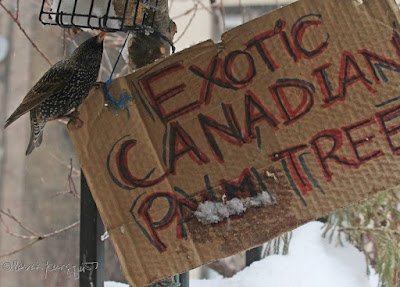 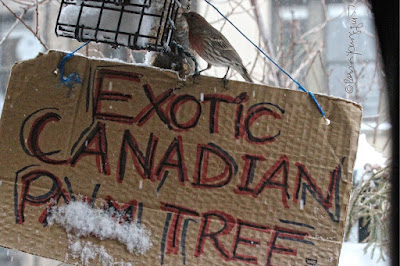 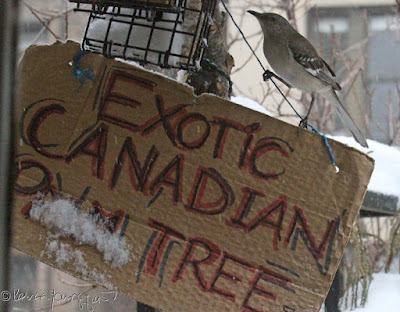 The pictures were all taken yesterday during the "bombogenesis" snowstorm. The photos are of the bird types (respectively) representing those known to be European starlings, house finches, and Northern mocking birds.

All of these bird types, besides sharing a love of insect-suet, share an anatomical feature that enables them to perch. According to a web-page, birds "who perch are classified as 'Passeriformes,' or passerines. The name means 'sparrow-shaped.' The passerines are also known as songbirds."

This page also states that,"Perching birds make up the largest order of birds in the world. There are 59 families and about 5,100 species, which means perching birds are about 60% of all living birds."

Moreover, they explain that "Perching birds range in size all the way from tiny kinglets and warblers to the magnificent raven. Passerines are believed to be the most advanced of all birds, as well as the most adaptive and intelligent. They all share the same type of foot, with three toes pointed forward and one backward. This foot is adapted to gripping a perch. The muscles and tendons of their legs are designed to tighten the grip on the perch if the bird begins to fall backward."

During yesterday's Nor'Easter, the "tag" for my exotic Canadian Palm Tree was an accessible place for birds to perch, thanks to their being able to do some fancy footwork within a given tree!