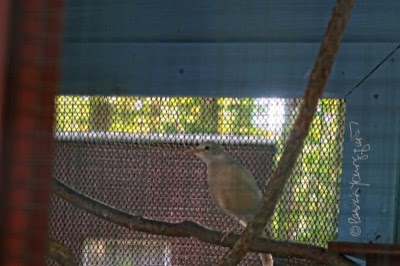 The bird in the photograph above goes by the name of Pearl. In this picture, she can be seen in her home which is on the grounds of The Raptor Trust in New Jersey. The Raptor Trust, as you may know, either from your own experience, or from my posts here on Blogger,  is a bird rehab facility in New Jersey. I learned about the organization through The Wild Bird Fund, a bird rehab facility in NYC.

Pearl belongs to the bird type known as the American Robin (AKA Turdus migratorius). I was introduced to her this past Friday when a dear gentleman, FR, drove our mutual friend, DD-S, as well as his dog, Uli, and me from NYC to Millington New Jersey; where The Raptor Trust is located. I had the distinct honor of sharing the backseat with FR's chow chow, Uli (a nickname for Ulysses). 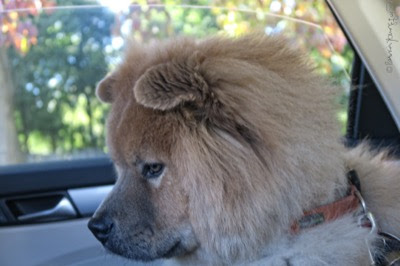 He is a dog you may recognize as I featured him in a post here on Blogger this past August, in honor of National Dog Day. Uli was a great travel companion and didn't bark about the fact that his animal type is not allowed within the grounds of The Raptor Trust. The reasons for their rule are obvious, even Uli understands! 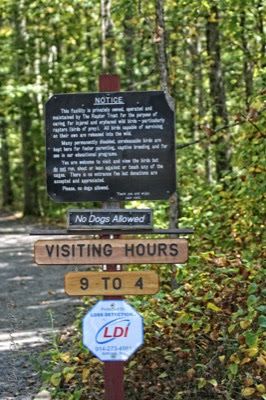 And Uli also seemed to know, that after FR checked out the grounds of The Raptor Trust, he'd return to brush Uli, 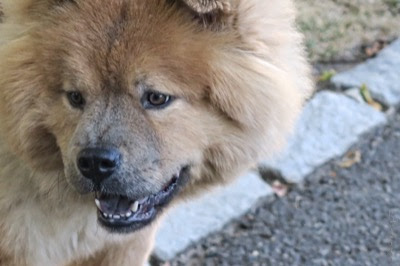 while DD-S and I took our time to enjoy learning about the birds who are at the facility. I saw a number of bird types while I was there; including bald eagles, falcons, ravens, red-tailed hawks, and a few owl varieties. (In the coming days I will post specific information along with the photos I took for each of these bird types.) I also saw Pearl, the American Robin I introduced you to at the onset of this entry. Another image of her within her living quarters can be seen below. 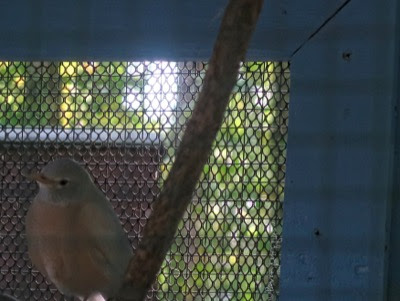 The mesh which is over the fencing of her home makes it difficult to get a sharp image, yet there is something about the softness of these images that reveal how vulnerable Pearl is. There is a sign on her home which addressees Pearl's circumstances stating, "American robins are one of the most familiar songbirds in North America, but the robin in this aviary may not look familiar to you — she lacks the dark back and red breast for which her species is known."

I am quite familiar with the "dark back and red breast for which her species is known," for I was blessed to have an American Robin and his young one spend a lot of time in my urban garden this past summer. 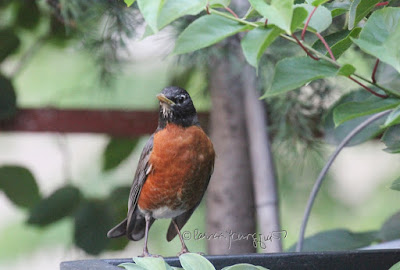 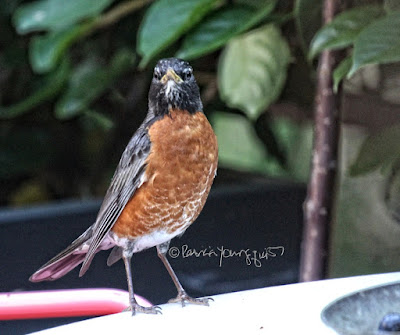 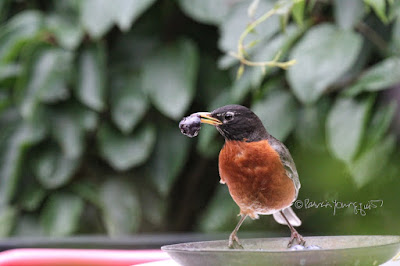 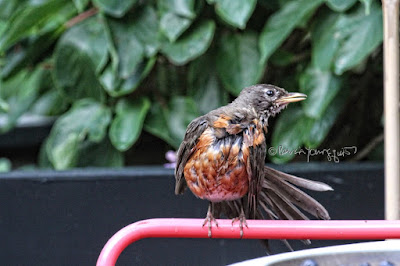 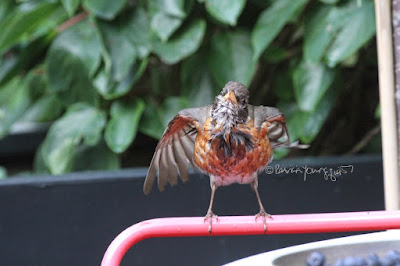 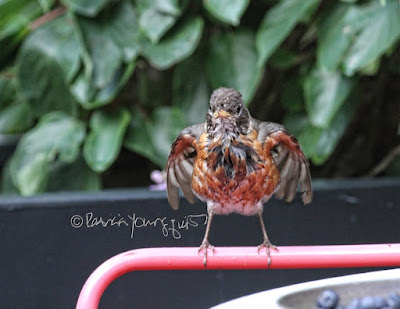 But Pearl will never know the freedom that my visiting robins enjoyed, for as the sign on her living quarters also states she is "a partial albino who was found as a baby and transferred to The Raptor Trust for permanent placement in November of 2009. If she were to be released, Pearl would not survive for long in the wild — her unusual light coloring  would make her immediately vulnerable to predators."

The Raptor Trust explains that ALBINISM (Pearl's condition) is defined as "a partial or complete absence of melanin (normal dark coloring pigment) from eyes, skin and feathers. Albinism is most often an inherited condition, but can also be caused by a malfunction in body chemistry, possibly related to dietary deficiencies or physical trauma." Be that as it may, Pearl seems to be coping well with her circumstances as evidenced by the images below. 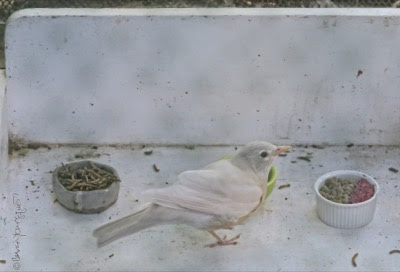 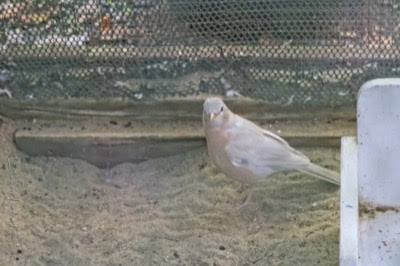 And I suspect she may not have lost her feistiness, which is indicated by a note that is clipped on the fence surrounding her home. 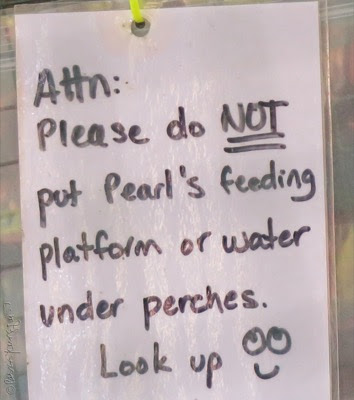 It would seem that Pearl, in spite of the fact that she's not the "red red robin" known in many songs, had no trouble "bob-bob-bobbin along," thanks to The Raptor Trust and the incredible loving care they've given (and continue to give) her.
Posted by The Last Leaf Gardener