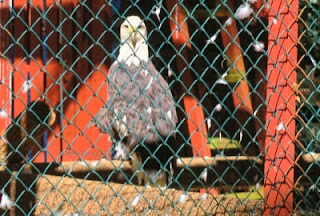 Hello and welcome to week thirteen of Tuesday's Truths. The photo of a Bald Eagle atop this entry was taken yesterday at The Raptor Trust, a bird rehab facility in New Jersey. As you may know, dear reader, I initially learned of The Raptor Trust's existence from The Wild Bird Fund, the only bird rehab center in NYC. I made my first trip to their facility last Friday and posted this fact on Blogger on Sunday, October 9th, where I introduced Pearl, an American Robin, who is classified as "partial-Albino" by The Raptor Trust, as evidenced in the photos below. 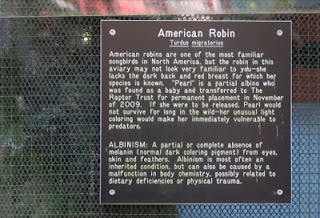 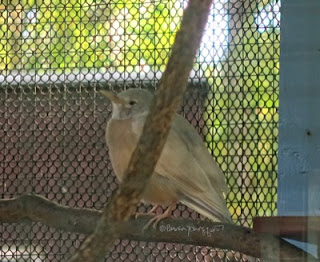 In any event, within the aforementioned blog post, I promised that I would write about the other birds that I saw there. But I  didn't know that I would have the opportunity to return to The Raptor Trust today with a friend who wanted to give our mutual buddy (who has been recovering from an illness for a long time) an opportunity to have a day trip.

I only took a few photos yesteday as I haven't had the chance to use the ones I took this past Friday! But the photo of Pearl (directly above, as well as the image atop this entry, and the two directly below were taken yesterday. 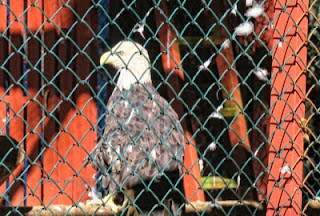 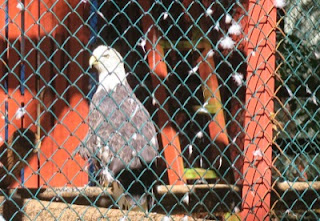 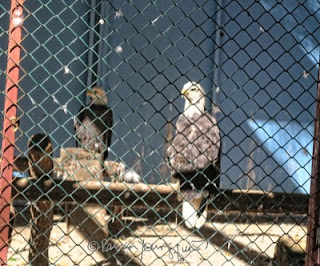 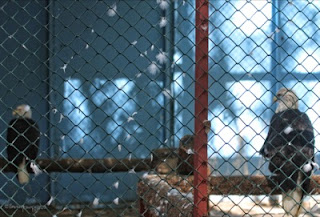 I was told that one of these eagles had to under go an amputation rendering the bird unable to fly.  Evidently the amputation was necessitated by an injury the eagle sustained when someone shot the bird, and because the eagle can no longer fly, this endangered species bird is now a permanent resident at Raptor Trust. The other permanent resident eagle is blind in one eye, a condition making flying unsafe, and as a result the eagle is also a permanent resident at The Trust. I have tremendous empathy for injured birds, especially ones that render them blind or with the ability to only use one eye, for as many of you know, I basically have only have vision in one eye, and that vision is being threatened at this moment.

There is a wreath alongside these eagles' home and part of its components include another symbol of The United States which is the American Flag. 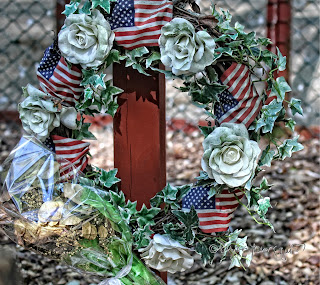 The wreath has been placed in honor of the memory of Rick Rescorla, and there is also a plaque by the eagle's home, commemorating Rescorla's life. 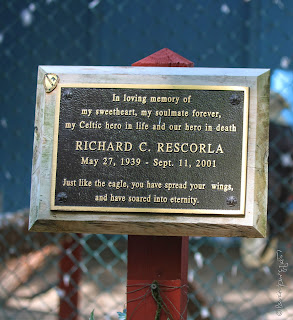 Upon seeing the wreath as well as the plaque, I was inspired to do some research honoring Rick Rescola. According to Wiki, "Cyril Richard "Rick" Rescorla (May 27, 1939 – September 11, 2001) was a United States Army officer and private security officer of British origin who served with distinction in North Rhodesia as a member of the North Rhodesia police (NRP) and as a commissioned officer in the Vietnam War where he was a second lieutenant in the  United States Army. As the director of security for the financial services firm Morgan Stanley at the World Trade Center, Rescorla anticipated attacks on the towers and implemented evacuation procedures credited with saving many lives. He died during the attacks of September 11, 2001, while leading evacuees from the South Tower."

In addition to Resccorla's Wiki Page, there is a lot of interesting information about him on the web, including a video on You Tube  featuring his rescue efforts during the September 11th terror attacks, which is a topic I've featured in a number of entries here on Blogger.

All sources re Recorla point to what a hero he was in life, and with the help of the loved ones survived by him, he continues to be a hero long after his death, the eagles at The Raptor Trust will be the first ones to concur with this fact, for many donations have been made on Recorla's behalf in an effort to raise awareness about America's national bird, The Bald Eagle!
Posted by The Last Leaf Gardener