The Luck of the Irish — NOT SO LUCKY FOR PIGS! 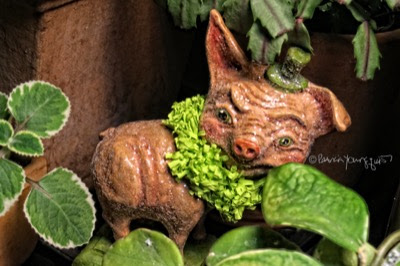 A little over three weeks ago, March 1, 2016, I announced here on Blogger that it was #NationalPigDay. In that entry, I had pictures of pigs that have visited my home from time to time, including a different image of the pig that is featured in the photo (accompanying this entry) of her in my succulent garden, where she has been spending the month of March.
The month of March is known as Irish American Month, and today, March 17th, NYC will have its annual parade. The parade is in honor of this heritage, and in honor of of Saint Patrick’s Day.
At the time that I posted my March 1st entry re pigs, I did not know that they are a part of Saint Patrick’s history, but since that posting, I’ve read the following:
“…when (Saint) Patrick was traveling with some sailors on land after they docked their ship in Britain, they had trouble finding enough to eat while crossing through a desolate area of land. The captain of the ship on which Patrick had sailed asked Patrick to pray for the group to find food, since Patrick had told him that God was all-powerful. Patrick told the captain that nothing was impossible for God, and he prayed for food right away. Miraculously, a herd of pigs appeared after Patrick finished praying, in front of where the group of men was standing. The sailors caught and killed the pigs so they could eat, and that food sustained them until they were able to leave the area and find more food…”
I don’t eat meat and have an appreciation for these creatures as Charlotte (from Charlotte’s Web) did! Therefore I found this information to be disturbing! For while pigs may have met luck to the persons traveling with Patrick, this animal type was not so lucky…
Posted by The Last Leaf Gardener