“Deep in their roots, all flowers keep the light.”


Earlier in the week, upon my hearing the news of the terrorist's attacks in Belgium, I thought of CB, a woman in my hood who died in February of 2014. Among others, CB was survived by her sister who, as far as I know, still lives in Belgium. I've only met CB's sister, once, and the occasion was at the luncheon which was held after CB's funeral mass.

As for CB, I initially met her in the 1980's when I was doing some volunteer work for SL, a widow of the man who had headed The William Morris Agency. SL lived in the luxury building, where CB and her husband had a penthouse apartment overlooking Central Park. There is an entrance to Central Park directly across that building, and it one that I’ve used numerous times over my many years in New York City.

And it is at that entrance one can see a tribute to Theodore Roethke, the American poet who lived between the years of 1908 and 1963. Many poets were influenced by his teachings and/or writings including the poet, Sylvia Plath.


In any event, the tribute to Theodore Roethke is the placement of his quote, “Deep in their roots, all flowers keep the light.”  It is on a plaque that is adhered to a rock which is a few yards from the entrance to Central Park that I have just mentioned. The Roethke tribute is featured in the image atop this Blogger entry; as you can see daffodils and tulips are now attempting to surround the rock. More pictures of these flowers can be seen (respectively) in the images below. 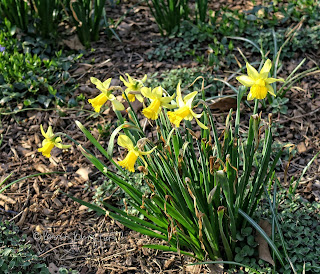 The Roethke tribute is also a favorite spot of robins, as evidenced by the photo-ops of one seen in the following pictures.

I took these pictures while on my way to an appointment, and I must confess that I was so caught up in my memories of SL and CB, as well as with my thoughts about the awful events that had occurred in Belgium, that I nearly missed the Roethke tribute!

It was a robin who called me out of my thoughts of reminiscing and analyzing! I was instantly reminded how easy it is to miss the blessings at hand while being preoccupied with other thoughts. At times like this, I turn to E.B. White’s essay, “MYSTERIES OF LIFE.” It is an essay I’ve already posted in cyber-space, but an essay worth of repeating:


"About once a year the human soul gets into the papers, when British scientist convene. Once a year the mystery of life, the riddle of death, are either cleared up or left hanging. The reports of the learned man enthrall us, and there have been moments when we felt that we were really approaching an understanding of life’s secret. We experienced one of those moments the other morning, reading a long article on the chemistry of the cell. Unfortunately, when we finished we happened to glance into our goldfish tank and saw there was a new inhabitant. Frisky, our pet snail, had given birth to a tiny son while our back was turned. The baby mollusk was even then hunching along the glassy depths, wiggling his feelers, shaking his whelky head. Nothing about Frisky’s appearance or conduct had given us the slightest intimation of the blessed event; and gazing at the little newcomer, we grew very humble, and threw the morning paper away. Life was as mysterious as ever."
Posted by The Last Leaf Gardener