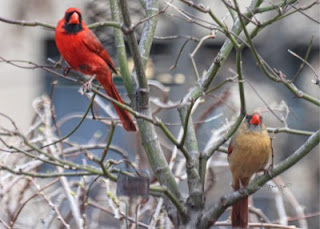 Cardinals are  the state bird for seven of the United States (these include Illinois; Indiana; Kentucky; North Carolina; Ohio; Virginia, and West Virginia). This is  a fact that gave Cam (to the right of her husband in the first picture) bragging rights (as if she needed them) when she put together her book Words In Our Beak Volume One.


I'm not used to referring to Cam in the past tense, and it pains me to do so, for I miss her more and more with each passing day.

On this day of March 3rd, I thought about Cam's remark re cardinals being the state bird for seven of our United States, because March the third is National Anthem Day.

According to Holiday Insights, "The Star-Spangled Banner is the national anthem of the United States of America. It was written by Francis Scott Key. National Anthem Day celebrates  this song, and the rich history behind its creation. The song officially became our national anthem on March 3, 1931..."

"In August 1814, the British army detained Dr. William Beanes as a prisoner of war. He was a friend of Francis Scott Key. On Sept. 13, 1814, Francis Scott Key and a U.S. negotiator boarded a British vessel where Beanes was being held. He negotiated his friends' release. But then, Francis Scott Key was detained that day along with the negotiator. They were held until after the attack on Fort McHenry, which guarded the harbor and city of Baltimore.

"He watched the bombardment of the fort from the ship. The next morning, he was ecstatic to see that the American flag was still flying over Fort McHenry. This historic event inspired Francis Scott Key to write 'The Star-Spangled Banner' the following day (September 14, 1814).... A few people incorrectly assumed that National Anthem Day is September 14, the day the song was written. This is incorrect. National Anthem Day is every March 3rd, in celebration of the day that congress made the Star-Spangled Banner our national anthem."**

Holiday Insights also states that one should "Celebrate today by proudly flying the flag. Also listen to and sing the Star-Spangled Banner."

A couple of my figurines, seen in pictures below, and whom you might recognize from a recent Fb post are proudly flying their flags! 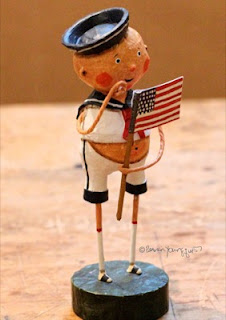 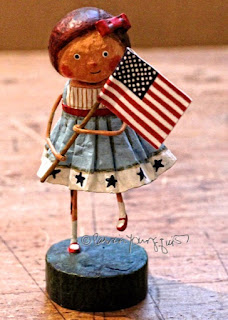 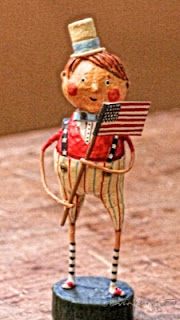 In terms of heeding Holiday Insights' suggestion to listen to the National Anthem, I've included a link to Lady Gaga singing it.

I don't know very much about Lady Gaga's music, but my "connection" with her is that her parents live 1.5 blocks away from me, attend the church where I was once active, and own a restaurant in the area where I live.

Cam had (and has in her legacy) more bragging rights than I do when it comes to most matters. However, I can dedicate this post to her, as well as her comrades, to commemorate them being the state bird for seven of the United States.
Posted by The Last Leaf Gardener