An UPDATE: Tweeting and Reflecting (Details on The New Direction for TLLG on Blogger)

It has been over a month since I posted here on Blogger, and I'd like to use today's entry as an opportunity to state what my intentions are for this blog in the days to come, for I feel I have gotten away from my original hope re this endeavor, an endeavor I began on the last day of 2009, when I set up this blog, stating:

"Now that I've gotten the setting up of my blog underway (and making my New Year's resolution to stick with a posting schedule, it seems I may be passée. I understand many people have moved on to Tweeting. It is my life story summed up in ten words: at the airport when the ship comes into the dock. Being a reflective soul, I'll probably stick to blogging over tweeting. Besides, as it is, while some of my posts will be snippets and captions, others may border on mini essays. My temperament reminds me of Herb Gardener, whom I happened to meet while working at a theater (but that is as 'they' say, another story), and he told me that before becoming a playwright, he was a cartoonist and when the 'bubbles of dialogue got bigger than the cartoon-characters, it was time to be a playwright.' Similarly, as opposed to tweeting, blogs let you generate more in-depth content. I see them having greater resilience in terms of perception. But they require what many people seem to consider long-term commitment today:setting aside 20-90 minutes daily, weekly or semi-weekly. Still some bloggers are providing insightful or informative blogs which I hope to do also. I am in it for the long haul, and perhaps the Charles Schultz cartoon posted below sums it up:"

Now, today, March 6, 2014, as I look back on my initial (December 2009) intent for this blog, which was at a time I knew very little about social media, I realize that in some ways, I've succumbed to the "pressure" of tweeting, albeit through my Facebook (FB) and Pinterest postings being automatically tweeted (it's rare that I compose a direct tweet from twitter), and I've neglected what is near, as well as dear, to my soul: generating more in-depth content.
However, I realize my taste for this is not necessarily in sync with certain folks, and I also realize that my FB posts might be a bit too long for that venue. No one has complained; in fact, my experience with my authoring of my FB entries has been that folks welcome my perceptions  as well as my information and I am very grateful for this.


But just as Herb Gardener confessed that when his "bubbles of dialogue got bigger than the cartoon-characters, it was time to be a playwright," I feel that before my narratives become too long for FB venues, I'll return to posting more in depth content within my blogging venues: Blogger, tumblr as well as hometalk.

I'll leave the shorter content for FB readers, who will always be directed to my blogging in case they want to read more.

Part of my inspiration to return to my intent has come from the birds who visit my garden, and going forward they will be co-narrating with yours truly, as we delineate our experiences in and out of the garden.

At the present time, all of the flora I grow  has been winterized, but when they awaken in the spring, I expect their voices will join in with my birds and I, as we work together to tell stories of urban garden life in a way that provides knowledge and insight.

We want to provide a reason for one to be interested in what grows in a garden, as well as a reason for folks to want to get acquainted with the birds and insects that visit it and we plan to do it through anthropomorphizing (the process of attributing human traits to living entities that are not human), although, if truth be told, the non-human living entities can probably teach us much more, but, since, as of yet, they don't use a computer, I am here to help give voice to them.

Our hope is to put these stories into a book format, and a chapter that might give you a sense of our voices, may be found by clicking here.

But we are not limiting ourselves to a book; rather, we anticipate having mini movies to accompany it, much like the one, "The Kiwi Speaks! Fifteen minutes of Fame . . . almost," which is something I produced and is in my Vimeo Library. It is a  virtual garden-themed story that was narrated by one of my kiwi vines.

In any event, all of the aforementioned is my plan for moving forward on Blogger. Today I will introduce you to the characters involved. The images posted above this entry are of European starlings (who can be seen "tweeting" in my urban garden). They are just  few of the characters who will be involved in my projects.

Moreover, these birds also take the time to  do more than tweet; they are most reflective, as you might surmise from the images below. Their being introspective will make them great writers.

My other visiting birds also do both tweeting and practice being reflective in a variety of ways, as evidenced in the images below.

The pictures feature sixteen different bird types tweeting either verbally or non-verbally, as well as reflecting in their own way. All the "action" is taking place in my urban garden. 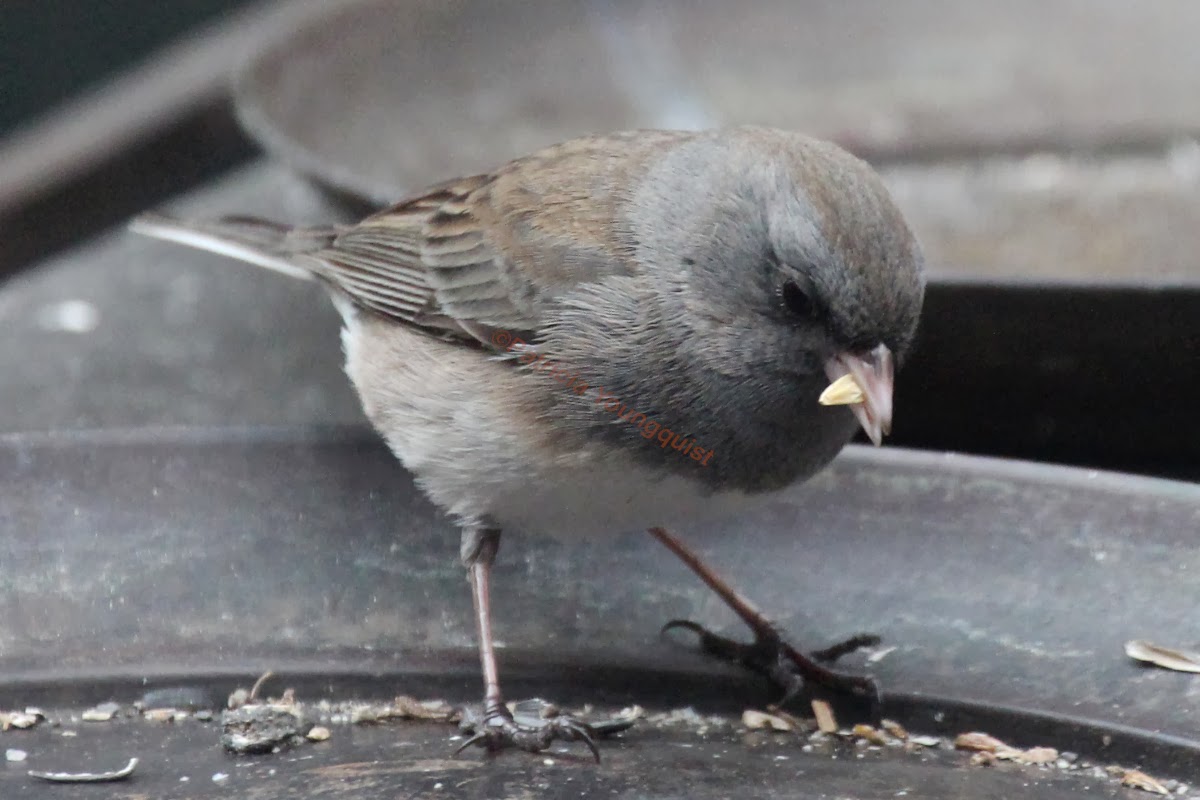 Grace Before Meals? Dark-Eyed Junco Reflects:
(This image was featured in an April  2013 posting here on Blogger.) 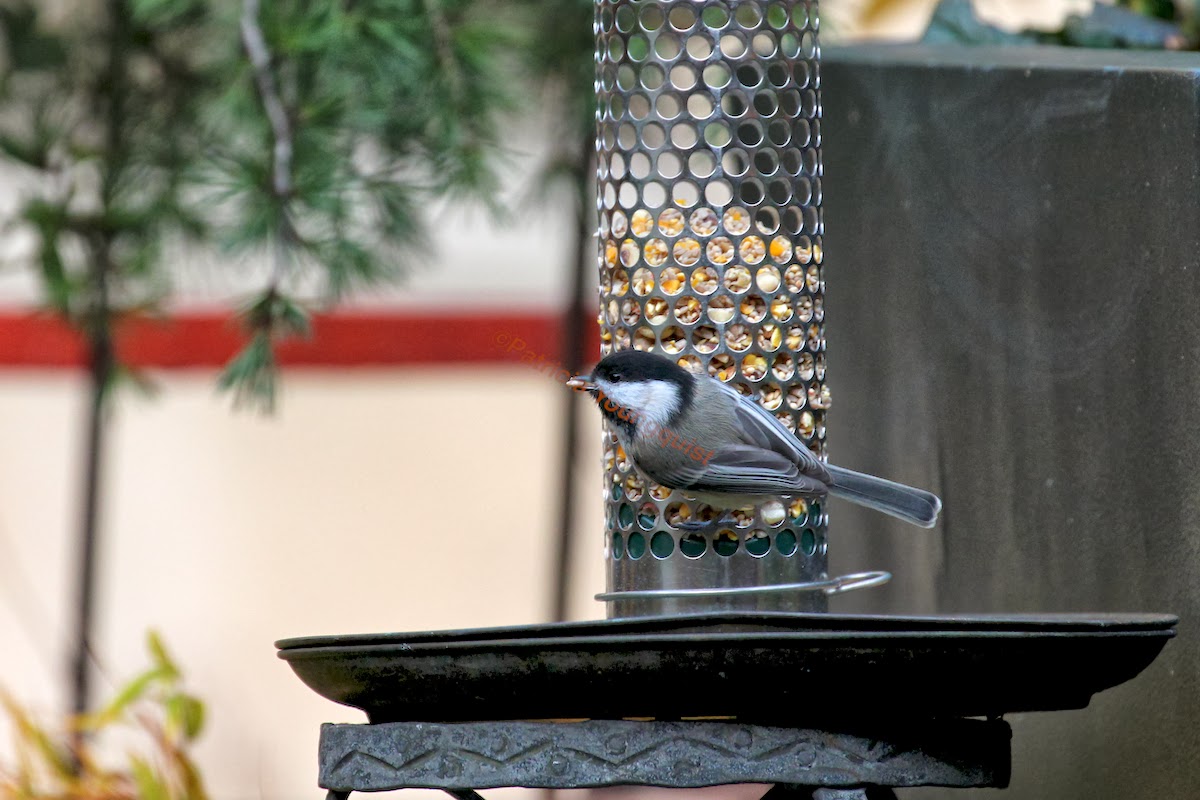 Chickadee Reflecting OR Leering?
(This image was featured in an April  2013 posting here on Blogger.)

One of the most enduring tweeting and reflecting moments performed by birds visiting my garden took place this past fall, when Cam and Mac had a son, Vincenzo. He can be seen (in the image below, standing at the right) doing real-time tweeting to his mother (in pursuit of food).

The other cast of feathered characters who have visited my garden as of this date are a lone downy woodpecker, a lone nuthatch, and, because it's New York, many pigeons have begun to take over the premises. I do not feel that my photo-ops of the downy who visited me give him/her justice, but if you'd like to see them, please click here.

As for the nuthatch, to my knowledge I was only graced with one visit, but I did get a photo-op of the lovely bird tweeting as well as reflecting. The pictures can be seen below.


And as for pigeons, I have a variety of them, many more then are featured in the images below, and I truly hope they don't take over my feeders, but since they are a part of the birds that visit, their voices will be heard in our projects.

This brings me to the conclusion of introducing you to the feathered characters who will be co-authoring  my forthcoming projects, projects that will be introduced here (to TLLG Blogger readers) as we embark on them.

If you have been following me on Blogger or my other cyber-venues, you know that I have given voice to flora, which I will continue to do, and I will also follow up on my garden review series that I began in January of 2014.

And, if you have read my content  you also know I give voice to the whimsical characters (similar to the ones pictured below) who visit my indoor succulent garden.


I will still be doing this, especially with the coming of spring and Easter, but will reserve the aforementioned content for hometalk and tumblr, but I'll post links here to the "stories" that I post there, in the event you want to keep up with the antics of these characters.

So, stay tuned, dear reader; my birds, flora, and whimsical characters have much to offer you, and we appreciate your readership!
Posted by The Last Leaf Gardener