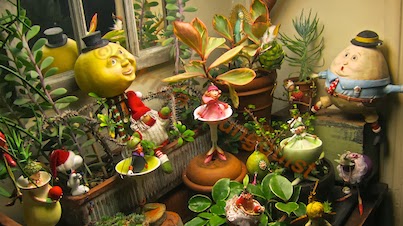 Hello and welcome to part two of my 2013 year-end garden review which I introduced in a prior post here on Blogger when I discussed certain "events" that occurred in my urban (NYC) terrace garden in January of 2013.

Today's post will focus on a specific event that seemed to be the main focus re my garden in February 2013. That event was the unexpected and brutal "attack" of Nemo, a nor'easter causing a couple of my trees to topple over from the wind and weight of heavy snowfall; and not from the cocktails they may or may not have been drinking.
The cause behind my trees toppling over is something my non-tea-toddler visitors (to my indoor succulent garden for the 2013-014 holidays) pictured above in a group shot and below in solo photo-ops. 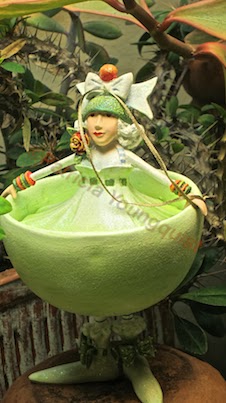 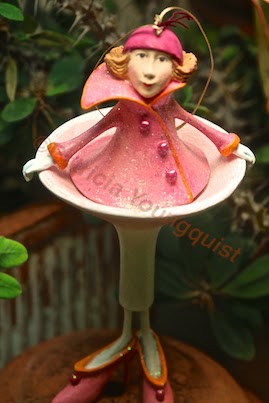 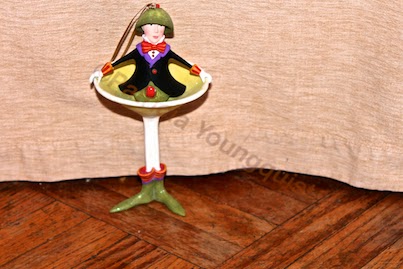 In any event, now that I've let my cocktails have their say, it's time to share with you what happened to a couple of trees in my urban garden during the month of February of 2013.

It was only eight days into the month when my 2012-2013 Christmas tree toppled over again (as you may recall this happened soon after it was put up) and, since this seemed to be a reoccurring event for my small Christmas tree, I was advised by a spokes-tree (pictured below), 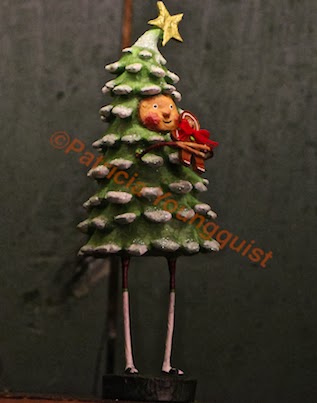 to just let the tree be on its side so my visiting birds could enjoy its foliage until I removed it in the spring. And I followed her advice as evidenced below. 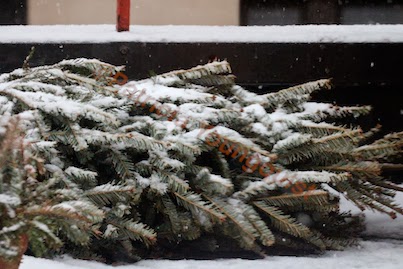 It was sad to see my sweet Christmas tree lying on its side but I think my spokes-tree was right to advise this, for on February ninth of 2013, the nor'easter which had formed on February seventh, hit New York City, and one of the consequences to my garden was the toppling over of my beloved Chelsea Larch (a member of the Larix Kaempferi family).

The results of the larch's accident may be seen in the photo-ops below. 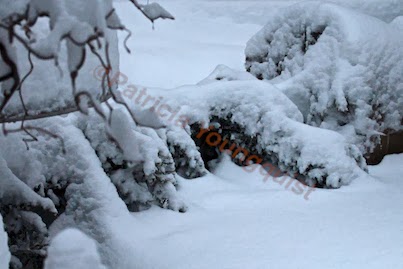 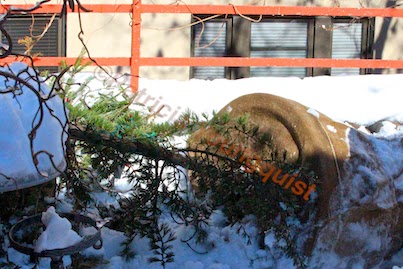 As I recently mentioned to Douglas H in a comment re one of my posts on HT, "I initially bought the larch in 2005 at a place on 44th Street and 11th Avenue and with the help of a colleague we wheeled it on my cart to my home in the UWS near Central Park. From there we took it up five flights of stairs before planting it in my roof extension garden . . . I had it for seven years before transplanting it which I did (in December of 2012) . . . some of the branches were broken, altering its shape. I was devastated."

Today, January 11th 2014, I am grateful to say that the larch did bounce back, albeit with an altered shape, but since this entry deals specifically with garden events during the month of February in the year 2013, I'll leave you with the saga and fate of my larch with the photo-ops posted directly above.

Fortunately Nemo was the only drama my urban garden had to endure in the month of February during 2013. In spite of the heavy snow fall, an array of visiting wild birds were still able to nosh from feeders in my garden, although mourning doves seemed to dominate the situation as you might surmise from the pictures posted below. 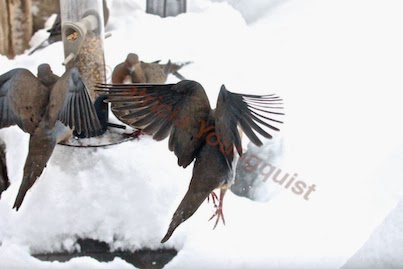 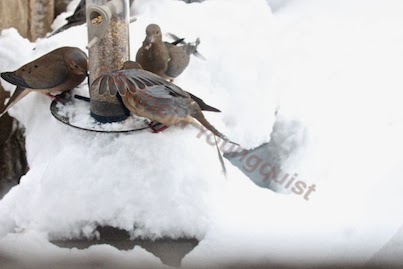 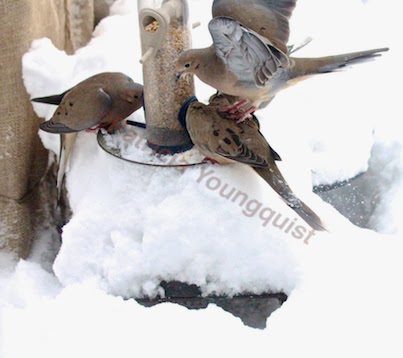 The tube-feeder from which these mourning doves are noshing was discussed on hometalk.

And with the antics of these mourning doves, this brings me to my conclusion of my review of the "events" for February 2013 in my urban garden.


However, before I leave this post, I have a question for you: what natural disasters (storms) have attacked your garden and how has it fared as a result? And if it snows in your garden, how do your visiting birds deal with snow laden feeders?

Meanwhile, as always, I welcome you to share your "green thumb" experiences within the comments field at the bottom of this entry. If you are new to posting on Blogger, please click here. And please stay tuned as I continue this series.
Posted by The Last Leaf Gardener