I came across this info while researching an unrelated topic. However, the lyrics of the song are somewhat relevant, as it has been a week since I posted here on Blogger, a venue for which I've been rethinking in terms of my scheduling content as I stated in a recent posting.

It seems what I will do is publish similar content across the three venues for which I blog (Blogger, tumblr and hometalk), as I think this is a way for folks to read my informative — hopefully — musings which are always accompanied by images or videos, and do so in a venue which is easiest for them to view/upload; as opposed to checking a variety of venues.

But for "snippet-style" postings I will stick to Facebook (both TLLG's and Cornell's FB Pages as well as TLLG's Pinterest Boards).

I am not a fan of duplicating content, but I'm a fan of Patrick McDonnell, the creator of the comic strip Mutts (an "episode" is posted at the top of today's blog posting) and on a given day the same strip appears on-line, as well as in a number of different newspapers, but "snippets" can be found on his FB Page for Mutts. Therefore I will take his lead going forward on Blogger, starting tomorrow.

For today, I will discuss the week that was for me, not as an exercise in narcissism, but to conclude the way I've been posting on Blogger before I make the turn.

So on we go with today, looking back on the week that was after my last entry on Blogger, which also happened to be Veteran's Day, a day for folks in the United States to pause and remember the men and women who fought for our freedom and a day when some do volunteer work.

My volunteer work takes place on Sundays; however, on this past Veterans Day I was the recipient of a loyal volunteer, my tandem bike captain, ZW. For as most of you know I am legally blind and without a captain I would never be able to cycle which is something I appreciate doing as I've mentioned in a number of previous posts here on Blogger.

We went on a long ride to River Road, a breathtaking place in New Jersey, where David, her beau, took the following photo-op of some reverent geese participating in their own Veteran's Parade.

I'm not sure where these geese were in their travel itinerary, when they paused to march, as it's unclear whether these geese migrate or not. If they do, like Philippe (featured in the strip atop today's entry) they might not have listened to the voice in their head telling them to get out of town!

And during this week that was, it seems another bird, luckily for me, also did not get the "get-outta-town" voice in her head and that is Emily, the sweet Baltimore oriole, pictured below. 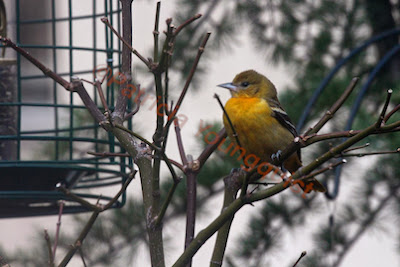 Emily graced my garden with an unexpected visit this past Saturday as evidenced in the image below. 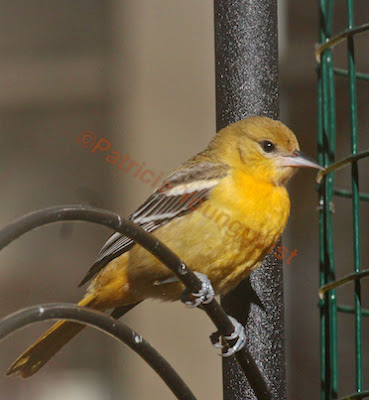 And for the past few days she has entertained me with her antics as you might surmise from the photographs posted below. 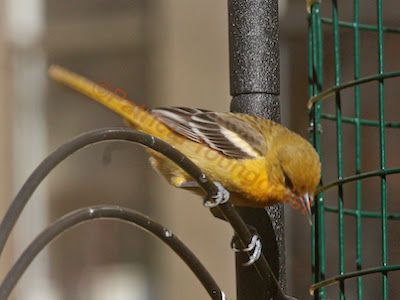 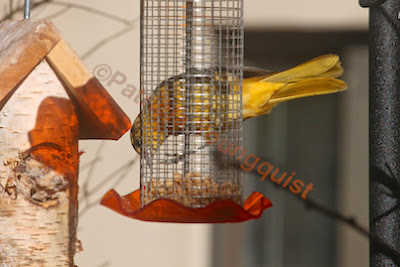 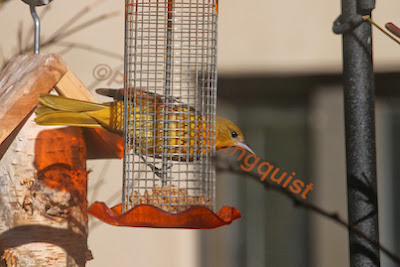 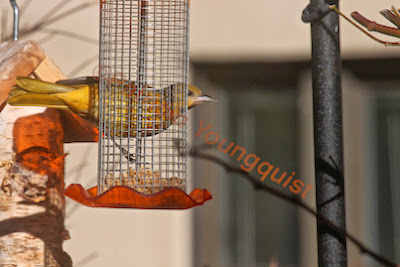 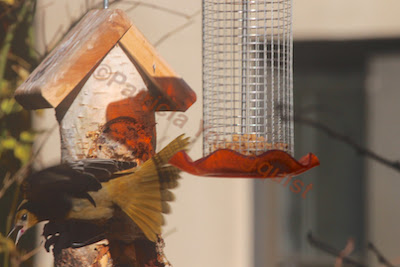 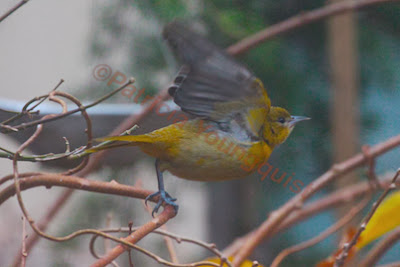 Emily is quite the entertainer and she appears to be traveling alone. I named her for Emily Dickinson who wrote a poem in honor of Baltimore orioles which is this:

To hear an Oriole sing


May be a common thing—


Or only a divine.


It is not of the Bird


Who sings the same, unheard,


The Fashion of the Ear


So whether it be Rune,


Or whether it be none

I have been told by bird experts that it is highly unusual for a bird such as Emily to be in NYC at this time of year, and I'm trying to prepare myself for when she leaves to proceed on her migration journey. However, perhaps she is in town for another parade, the Macy's Thanksgiving Day Parade, a parade whose route is near to where I live. If this be the case, she will be here a little while longer, and I can promise her a bird's eye view of Macy's festivities.