Dancing Beak to Beak (And Other Garden Stories) 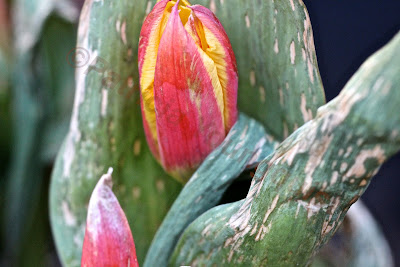 I ended my last post here on Blogger with photo-ops of the feisty folks and creatures that were visiting a succulent garden that I have in my kitchenette, and I mentioned that they "have been reiterating their message: 'Spring! Bring it On! Let the Spring Season Begin,' and as of today, April the 4th, thirteen days later, we have not had a warm spring day since that posting! It's been quite chilly, cold in fact, and some of the things which I grow in my  terrace (roof extension) garden are struggling with their ability to bloom! This is evidenced by the image posted above of one of my sets Kaufmaniana Tulips, a variety that was in its glory days much earlier last season!

Out of respect to my tulips (or anything else for that matter), I don't like to post images when they are struggling, as I find doing so akin to posting unflattering images of folks having a bad hair day or an unfortunate moment.

However, in the interest of informing those who have gardens that they need not to be necessarily be alarmed when what they grow is traumatized, I am including the photo of the aforementioned tulip atop today's posting. It was taken on March 27th 2013, four days after my last entry here on Blogger, and already today, April 4th 2013 it is getting back to its "normal" self as evidenced by the image posted below which was taken this afternoon. 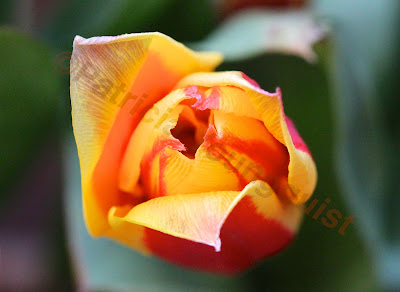 As for the crocuses I grow, in my last posting, I mentioned that Juan V said that "they should've grown by now," for crocuses awake from their winter slumber quite early in the season, eager to embrace any sign of spring. However, for the most part, this has not been the case for the 2013 spring season in my  garden.

At this time, only a handful of the sweet crocuses who share "homes" (containers) with my Actinida kolomikta and Actimida (Kiwi Vines) as well as with my Avellana corylus (Contorted Hazelnut), and my Autumn Clematis (also known as Donna's Legacy), have awakened for the spring season. However, since the date of my last posting, the crocuses that share their "home" with my Continus Coggygria (Smoke Bush), have begun to flourish, and a photograph of them is posted below. 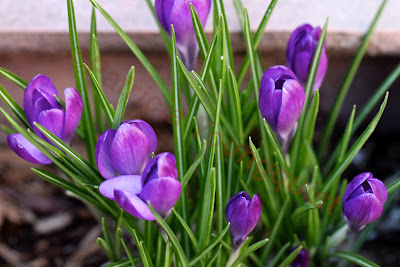 As for the "status" of the other "things" I grow; they are alive, but they are moving slowly in terms of growth, and they might be struggling to cope with the cold spring we are having, for the cool temperatures are often good for them, but cold temperatures don't seem to agree with their needs; and I will have to wait and see the "result," which is something I've learned to do as a gardener, although I'm not always accepting of the outcome or prognosis when it comes to the "things" I grow.

Be that as it may, this is the situation (since my last posting) re what I grow in my garden; however, regarding the "entourage" of feathered creatures that visit us, there has been some action since my last posting as evidenced in the images posted below.

The following pictures were taken during the last week of March, and while the exit of that month was somewhat lion-like (very cold and windy), the array of birds which had visited my garden beginning in late spring of 2012 began to return.

For example, the second to the last Sunday in March, March 24th, which, apropos of nothing to do with this post, happened to be Palm Sunday (the start of Holy Week); red house finches returned to my garden, and they seemed to be intrigued by the twisting and turning branches of my Avellana corylus  as you might surmise from the image below.


This feature of the contorted hazelnut is one of the reasons I have her in my garden, which was pointed out by my Actinida kolomikta, when he narrated my first garden themed Virtual Story (mini movie) The Kiwi Speaks! Fifteen Minutes of Fame . . . almost, and it may be viewed by clicking here.

As Holy Week progressed, my contorted hazelnut was thrilled by the attention she received from a number of birds upon their return to my garden, but this shrub has an inferiority complex, and she began to believe that the birds were not intrigued by her branches, but rather, they were intrigued by her proximity to the feeders which Juan V installed the last time that he was here as described in my previous post here on Blogger. The top (orange in color) of one of the feeders he installed can be seen in the image below, and it is easy to understand my insecure contorted hazelnut's coming to the conclusion that her branches were inconsequential to the birds except for the fact that they were alongside a few feeders.


Moreover, my contorted hazelnut felt that the birds appreciated her "home" (a container which she was transplanted into last year) more than they cared for her branches. She arrived at this conclusion when a number of birds stood on the "lip" of her home to more readily access the seeds in the feeders, which you might feel is an understandable conclusion on her part upon your looking at the image below.

But I think if the contorted hazelnut could get out of herself for a moment, she'd realize that the birds — especially the mourning doves — are dealing with  their own issues at this time of year! After all, it is mating season and the mourning doves are exhibiting behaviors I've never seen and some of their actions are quite hard to capture in a photo-op, especially their latest behavior of scratching themselves with their beaks as seen below.

I have done a lot of research in an attempt to find out why they are behaving this way! Do they have a itch they need to scratch in the same way dogs and cats do? Or are they using this "scratching" as a sign that they are available to be a mate of a deserving bird? Perhaps they are eating insects which have landed on their body? Maybe they are cleaning themselves since I don't (as of this posting) have a birdbath in my garden? Whatever the reason for this new action of theirs is, I'm not finding answers, and so, dear reader, if you have any clues about this behavior, please leave your remarks in the comments field which can be found below today's entry.

In any event, my contorted hazelnut has another reason not to give in to feeling slighted and that is the fact that for the first time since she's been in my garden (eight or nine years), she is flowering, and her flowers are awesome as you can see in the image below.

This is not that he wasn't interested in the nearby feeders or watching the comings and goings of the house finches!


And with the aforementioned visits from certain birds seen in this series of selected images, the month of March came to an end on Easter Sunday, March 31st 2013!

Moreover, the figurines who were visiting my indoor succulent garden (who were also featured in my previous post here on Blogger), took off for a vacation whilst new ones (some of whom are featured in the photo-ops below) came in on Sunday the Thirty-First for the fifty day Easter Season which ends on May the Nineteenth. 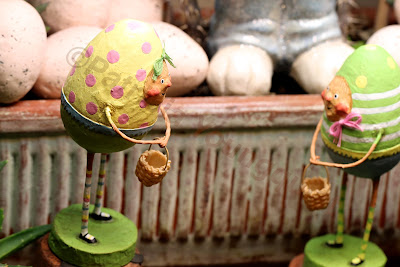 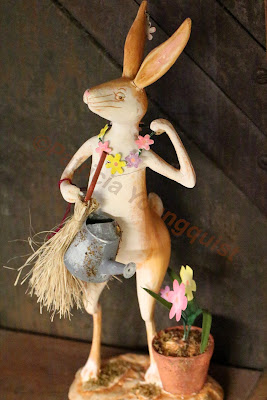 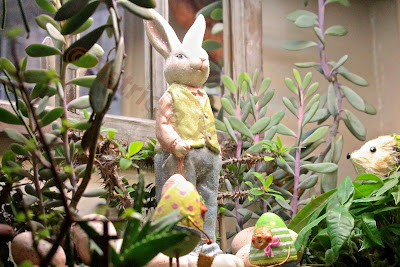 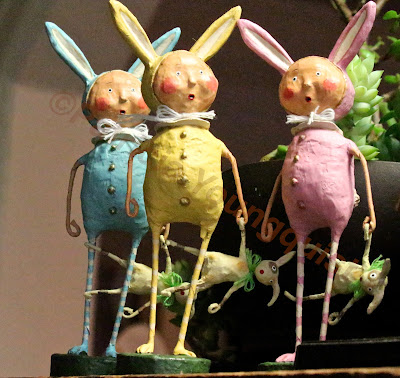 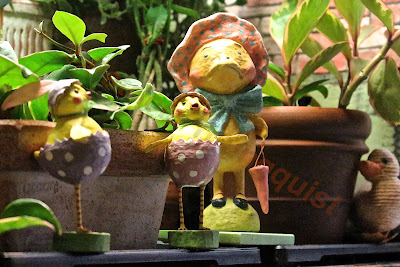 And these Easter visitors were not the only new arrivals, for the Monday after Easter, April Fool's Day, Cam (who, as you may recall, is my lone female cardinal) and her beau stopped by for a breakfast date and fed each other, 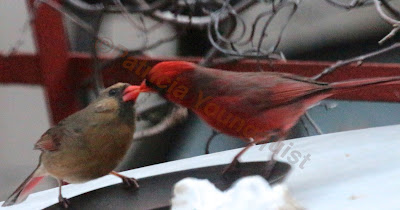 which I now understand is a sign that they may consider mating! It looks as if they were dancing beak-to-beak!

Soon after their interlude, Cam and her male companion played cat and mouse with Cam hiding at the northeast corner of my garden whilst her lover looked for her. 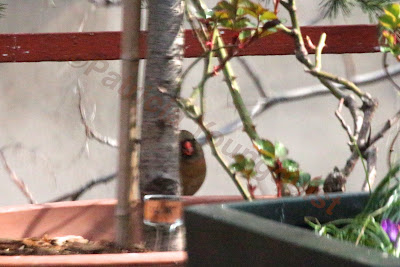 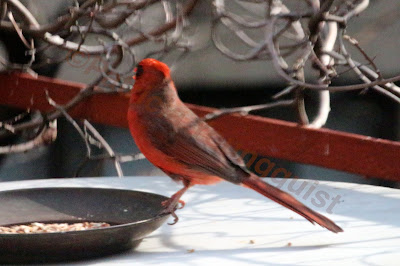 Cam and her friend were not the only ones that were in love in my garden, for the house finches took the first step to making whoopee too! This can be seen in the image below, where at the right of the image a female (brown) and a male (purple-red) began making eye-contact, whilst a red male looked away wistfully. He seemed a bit awestruck, and why not? Normally it is the redder-colored male finches that the female chooses for a mate. And now the red finch understood why the contorted hazelnut felt slighted. 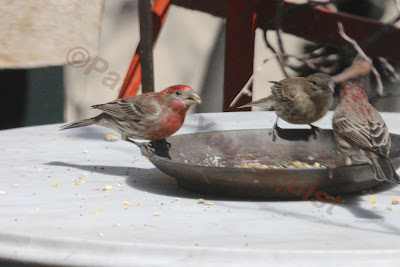 Be that as it may, the red male finch was not the only one yet to find love, for yesterday, a lone hairy woodpecker arrived in my garden, a camera shy one at that, as evidenced by the image below, an image showing him atop my urban hedge but hiding behind a branch of my smoke bush! 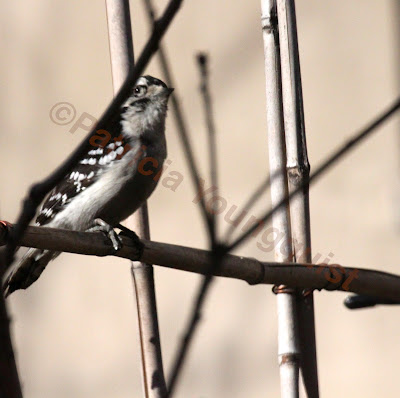 And upon posting this info, I want to clarify that my intent in this "update" is not to become a play-by-play-here's-what-happened-with-me-blogger; rather, my motive is rooted in something an editor told me about an essay which I submitted to The Atlantic Monthly, which is this, "Your reader deserves to know what has happened." Therefore, before I move forward postings on Blogger, I wanted to bring you up to speed and as always I'm interested to hear how your garden grows, especially with such a "volatile" start to spring!
Posted by The Last Leaf Gardener