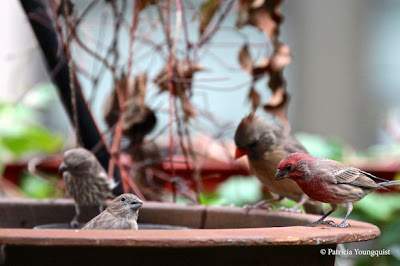 Today's entry here on Blogger is part two-H-1 of a series of posts pertaining to a year-end review for special occurrences in my urban garden for the year 2012 (the schedule for this series is described in part one as well as part two-A of this topic) and, because October 2012 was the month Hurricane Sandy hit the area near to where I live, my garden went through another upheaval, so I will be posting the review for October in three parts.

So without further ado, I "give" you today's entry, and I'll start with the image atop this posting where a few of my visiting birds can be seen gathered round the rim of the container which houses my Avellana corylus (AKA Contorted Hazelnut). It is the container Juan V and I transplanted the contorted hazelnut into during the month of April 2012, as discussed in my review for that month.

These birds looked as if they were holding a prayer revival as they are centered around a house finch inside the container whom I'm told thought se was in a ho tub! The birds who visit my garden had been quite the entertainers as evidenced by the number of posts I have re their antics here on Blogger as well as within my tumblr pages.

Additionally, I have a number of photo-ops of them within two of my Pinterest Boards; and they have made many appearances on TLLG's Facebook Page. And, moreover, they have been featured in a couple of my Virtual Stories (movies) that are in my Vimeo Library and if you'd like to view them you may click here as well as here.

Meanwhile, getting back to the image atop today's entry, it's very likely that instead of holding a revival-type-of-prayer around the House finch who was sitting inside the contorted hazelnut's container, they were anticipating Juan V's visit who was due to come that afternoon to help me with my "yard work.

The birds enjoy it when Juan V comes to my garden; however, they always want him and me to finish our work quickly so they can get back to their favorite pastime which is eating! This is especially true with Cam, my "lone" cardinal who can be seen in the upper righthand corner in the image atop today's blog entry.

Cam certainly gets around my garden; and the morning of October 2nd 2012, the day Juan V was scheduled to come here (after having last been here to help me put my garden back together after my so-called renovation as discussed in yesterday's post) was no exception, for prior to Cam's morning meeting with her friends around the contorted hazelnut, she was deep in thought atop the container which "houses" my 'Tamukeyama' (AKA Japanese Red Maple) as seen in the image below. 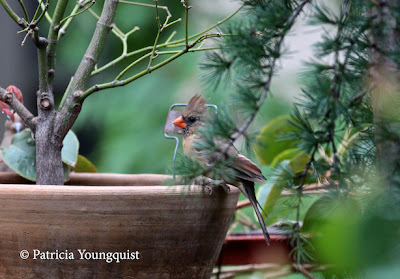 Cam loves to have the morning to herself as do I, but on this day, in October of 2012, as soon as she found a place to be alone, two mourning doves snuck up on her as evidenced in the photograph below. 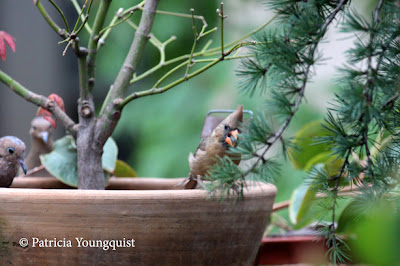 I suppose all of them wanted to eat as much as they could before Juan V's arrival as they are all too shy to eat when anyone — including yours truly — is present!

Be that as it may, Juan V did come, and the following four photo-ops (all taken by Juan V after we did our work) illustrate the "condition" of my garden the first week of October 2012, only seven days after my "so-called" renovation had taken place, a "scenario" which I touched on in yesterday's post; and also which I discussed in more detail in an entry I made this past September (2012) here on Blogger. 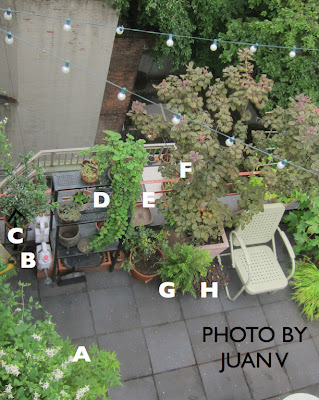 In the first photo-op, I've superimposed letters over Juan V's first image to draw your attention to certain things in Juan's image. Letter "A" indicates how lush my Sweet Autumn Clematis was becoming.
It is a clematis which I call Donna's Legacy (named after its grower); and while it has always fared well in my garden, Juan V and I did not expect it to bounce back so quickly after it had been uprooted and put in a "body bag" to accommodate my landlord's request of clearing my garden's "floor"; as described in prior posts which you may refer to by clicking here; as well as here and here.

Juan V also took an aerial closeup of the autumn clematis which can be seen below at the righthand side of Juan's second aerial view of the aforementioned four images. 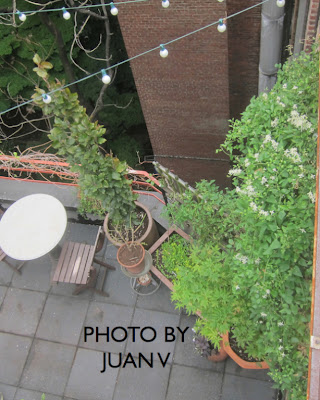 Getting back to the image with the superimposed letters: letter, "B" is referencing a pair of somewhat funky watering cans as they have been made from gasoline cans! I believe it's good to "re-purpose" objects whenever possible and I wrote about these unique watering cans on my tumblr pages. A close up of one of these watering cans is posted below. 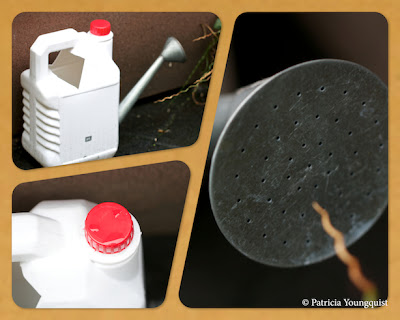 Moving on to letter "C" in the first of the Juan's aerial shots of the day, a Pyracantha coccinea (AKA Orange Charmer), which Juan had given me a couple of years ago, is being referenced. The 2012 year proved to be the first time it produced its awesome white flowers which can be seen in a close-up below, a close-up that was taken earlier in the 2012 gardening season. 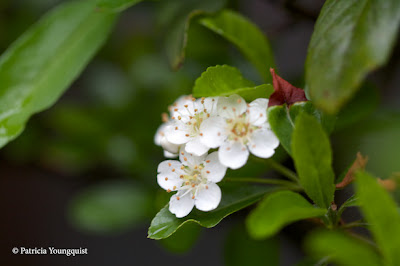 Meanwhile, in terms of the image with letters, letter "D" is referencing my Rubus calycinoides AKA Ornamental Raspberry, which can be a fussy vine if it is not pleased with its environment!

Given that I had to bring this vine inside (during my renovation), and put it in my bathroom as seen in the images below (taken at a different time, and are  ones that you may recognize from my other cyber-space venues, I've included them here for reference). It was somewhat of a miracle to see it had been so resilient and rewarded me by having its beautiful foliage cascading down its side as if it were playing a character in Rumpelstiltskin! 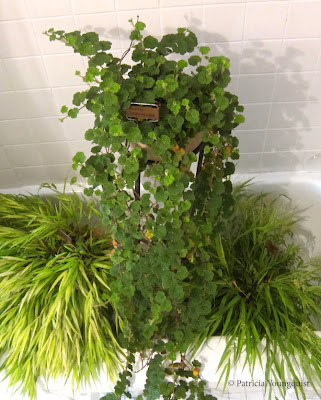 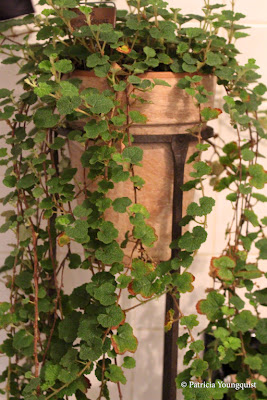 Be that as it may, letter "F" is referring the "bowl" where my beloved larch, the small one who was a statistic of July 2012's heat wave, once lived. A task ahead for Juan V  going forward will be to find and plant something new there, and whatever that might be, it will be hard to fill the hole in or hearts caused by the small larch's passing!

Letter "G" is referencing one of my Lemon-Lime Cypress twins, twins as I stated in an earlier post re this series who are the only "things" I grow which do not undergo my my garden winterizing as they are the only ones not sturdy enough to withstand a "normal" winter in my zone. I discussed this in an earlier post within this series, but I've highlighted the lemon-lime cypress here, as on October 2nd 2012, it was thriving so much, as was its twin, that they had to be "moved" into a bigger containers. The containers used for both of the cypresses had been ones belonging to my Helichrysum bracteatum, AKA Strawflowers, which I had given to Michael for his garden.

And lastly, re the "letter-filled" image, "H" is referencing yellow oxalis flowers which were continuing to survive in spite of the upheaval and a close-up of oxalis yellow flowers (taken at a different time, and is an image that you may recognize from my other cyber-space venues, but it is one I've included here for reference), and it can be seen below. 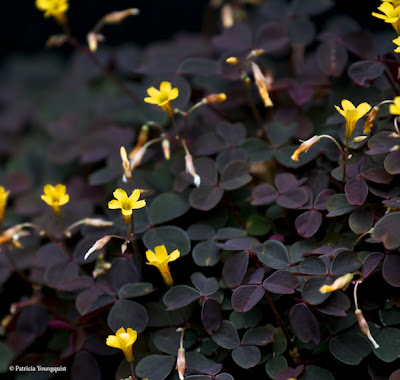 The third one of Juan's October 2nd 2012's photo-ops may be seen below and its double sided arrow is referencing both of the aforementioned lemon-lime cypress  plants, whilst the single sided arrow in the image is referencing the former home of my Physocarpus opulifolius (AKA Coppertina Tree), whose "fate" was described in former parts of this series, including a post which you may reference by clicking here. 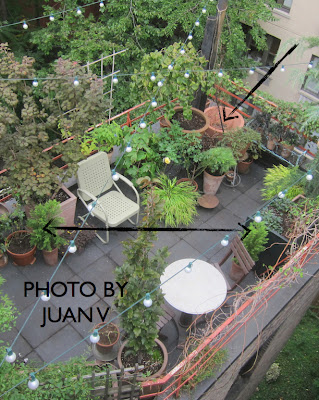 At the time this particular image was taken, the plan was to "store" my potted containers of sleeping tulip bulbs, as well as the bulbs of their comrades, the Heirloom Poet's Daffodils, within the former home of my coppertina, but as I stated in yesterday's post, we eventually planned to repot my "Chelsea" Larch in that container come December 2012.

As for Juan V's fourth aerial image of the day (which is posted below), it features another vantage point of some of the things I've mentioned regarding Juan's October 2nd 2012's aerial images. 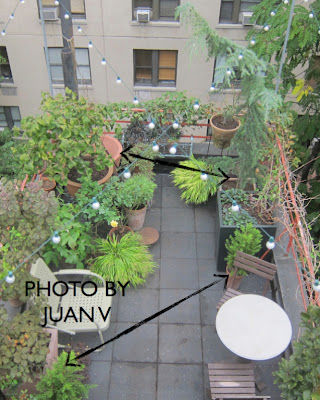 The double arrow in the front of the image shows both of the lemon-lime cypress twins, whilst the double-sided arrow in back indicates my intent to use the container (which formerly housed my coppertina tree) on the left as a "new home" for my Chelsea Larch who has lived in a cube (indicated at right) for over seven years!

In any event, the four aerial views do give a good indication as to how my garden looked after Juan V and I did our "yard" work on October the second of 2012; and he was due to return on Wednesday October the tenth to help me decorate my garden for Halloween.

I do not like to decorate early; however, since I've often used images of my garden in greeting cards which I design for Halloween, I need to have things decorated a few weeks before the holiday.

Meanwhile, the following images highlight  few of the "events" which occurred in the interim between Juan's visits of October 2nd and October 10th of 2012.

October 8, 2012
And as you can see, dear reader, with this selection of this array of photo-ops  of incidents occurring after Juan V left on the second of October, that for the first time in the 2012 garden season here, there were no losses or trauma in the interim of Juan's October 2012 visits.

The following images show how the garden looked after he came for his second visit in October of 2012 to decorate my garden for Halloween. 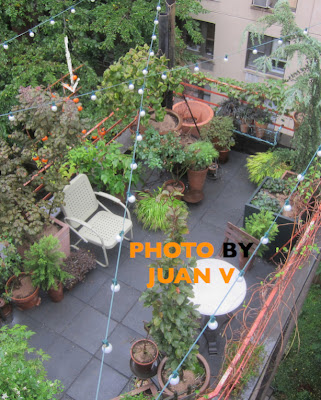 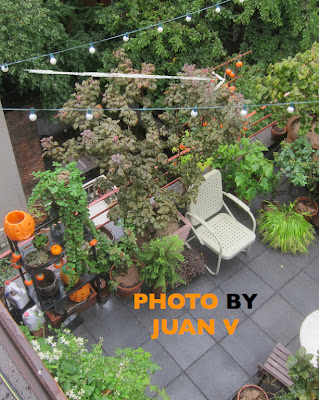 As you can see, dear reader, a white arrow has been superimposed on to both images. This has been done to indicate that my bamboo trellis, that serves as one of the two "urban hedges" which I have in my garden, and, it is a trellis that Juan V and I decided not to fill with foliage this year (which as has been indicated within an early post of my review series), wound up being a good place to hang my pumpkin lights for Halloween decor!

My other "urban hedge," which is my "replacement" shelving built by Juan V, can be seen in the lefthand side of the second image, and as you can surmise, was a good place for Halloween decor.

Closeups of a few of the specific decorations which Juan V and I used may be seen in the images posted below. 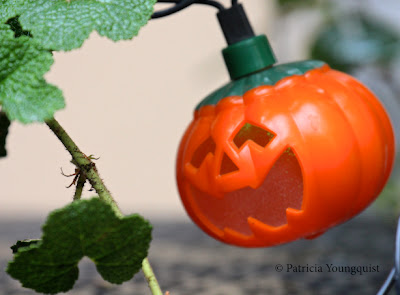 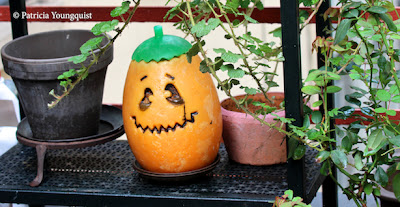 Decorating my garden for various holidays, is an "activity" which I have done in bygone years because I often use my garden as a place to create images for the greeting cards I produce — greeting cards that go beyond communication.

As for how my visiting birds responded to the Halloween decor, the following photo-ops reveal a few of their "reactions" immediately after Juan V left upon finishing his helping me in my garden.


And, soon after these immediate reactions, my feathered friends got back to what they love most about Halloween, which is not decor, but is eating treats as  seen below. 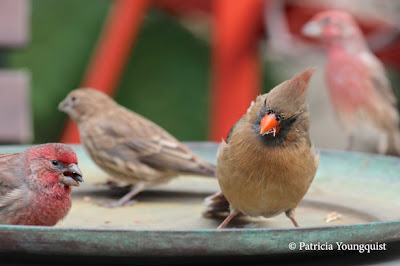 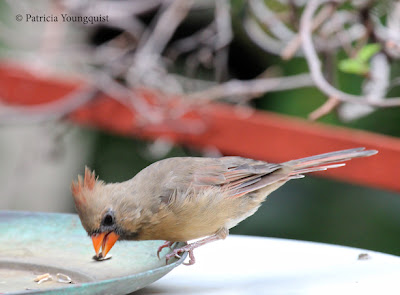 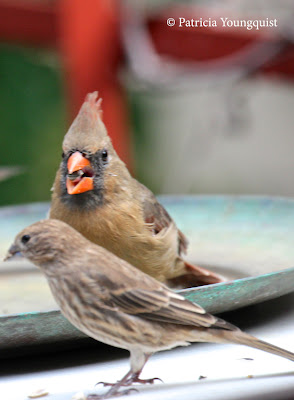 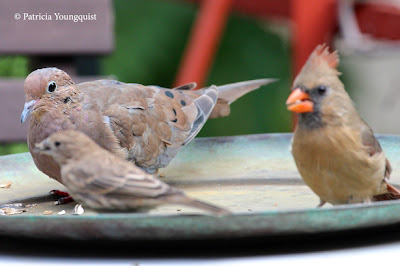 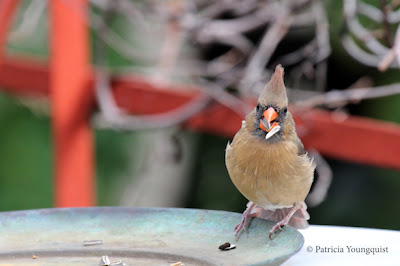 And this brings me to the conclusion of my review for the "events" which occurred in my garden from October 1st through October 10th of 2012.
Posted by The Last Leaf Gardener