April (and now May) Showers Take Away Flowers! 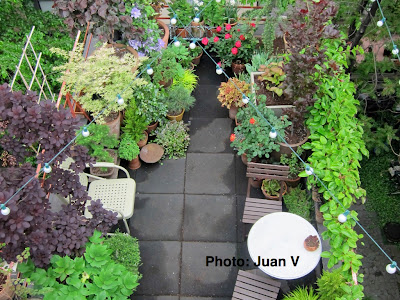 During a weather broadcast yesterday, May 8th 2012, the meteorologist pointed out that out of the first eight days of May, it has rained for six of them! Today is the ninth of May, and it's raining again. Moreover, it has rained heavily almost every day since April 21st 2012! Admittedly, it has not quite been the "40 days and 40 nights" of Noah's Ark, and, admittedly, the rain is very good for our reservoirs, but to some extent, all this rainfall has caused some angst amongst the things I grow in my urban (NYC) terrace garden, hence (since this blog is mostly about life in my garden) my lack of regularity in posting here on TLLG (although you can always find me on nybg's — New York Botanical Gardens — tumblr, Pinterest, and my Facebook Page for The Last Leaf Gardener).

Yesterday morning, Juan V came over to work in my urban (NYC) terrace garden with me, and fortunately we accomplished what we needed to do there before heavy rainfall began again. He was even able to do an "aerial" photo-op for me which is posted above, and, from the look of things, you might surmise that all is lush and thriving, and you may even find yourself wondering, what the hell is TLLG talking about re garden angst!

Here's what it is: Prior to yesterday, Juan V was last here on April 21st when my Fagus sylvcatica AKA Beech Tree was repotted. Before he arrived, my Paeonia suffruiticosa (Tree Peony), produced two beautiful and very large flowers, almost identical to the flowers that this same shrub produced last year, but, last year it produced three times as many, and it did so on May 8th 2011, as described in a blog entry that includes exquisite images of the flowers (which you may refer to by clicking here).

This year's peony flowers arriving on April 21st as opposed to May 8th, did not have me too concerned because in 2010, the Paeonia suffruiticosa produced gorgeous flowers on April 24th, and they thrived for quite some time; as told in my blog posts during the April and May months of 2010, including The Peonies Are in Bloom Again which you may refer to by clicking here.

Little did I know the morning of April 21, 2012, when I saw the peonies in bloom that they would have a very short stay this season — not even a week! And little did I know when I inadvertently reformatted my camera's memory card that I would have very few photo-ops of this season's peonies.

For the night of April 21st and all the days and days to follow it rained steadily and heavily; knocking off all of the sweet peonies' petals, and ripping off the petals of my Curly Sue, Tarda, Snow Parrot, and Parrot Blumex tulips which I fortunately have many photo-ops to share. But, for the most part, the 2012 spring season in my urban (NYC) garden turned into less than a week, with my Muscaris barely hanging on.

The following are just a few images of the consequences of what occurred as a result of the rainfall, and you can always read more about it as well as view different images on my other venues of nybg tumblr, Pinterest, and TLLG's Facebook Page.

Meanwhile, as you can see in the aerial photograph that Juan took, I do have quite a number of red and orange roses although they are starting to sag and many petals are now off after last night's and this morning and afternoon rainfall.

And, it looks as if my Heirloom Original Poet Daffodils did not succumb to the rain. The images posted of them below are from in between today's internment rainfalls and, as you can see, they are a playful looking flower and most certainly will give incentive to the other things I have growing, and perhaps even to me. 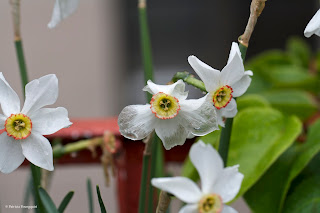 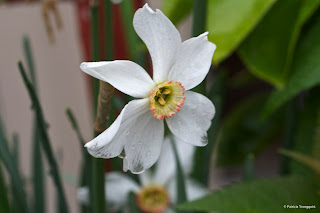 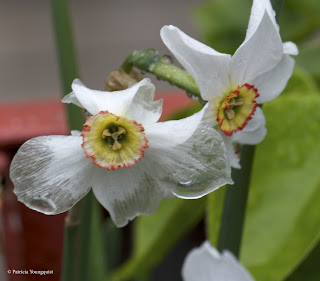 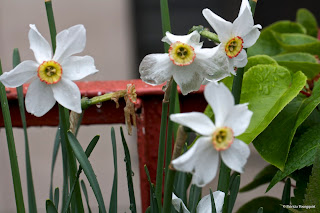