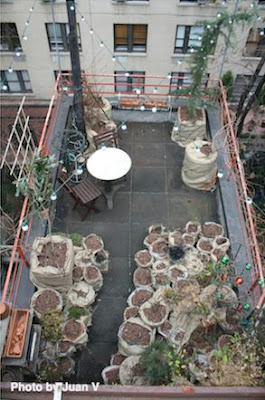 Today is the first Friday of 2012 in Ordinary Time, as well as the second Friday of the new year, and it happens to be Friday the Thirteenth, a day when some folks suffer from Friggatrtishtkaiedekaphobia.


The first time that I drew attention to this "condition" was in a blog entry on TLLG on May 13th, which happened to be a Friday, a Friday that my strikingly beautiful H.F. Clematis gave birth to a number of flowers.

Activity in my urban (NYC) terrace garden is quite different on this Friday the Thirteenth, because not much is happening. It's winter and most of the 80+ things that I grow here are asleep for the season, nestled in their containers, where they have been lovingly winterized by Juan V and me, which is a fact I mentioned in a previous post here on TLLG. (If you'd like to refer to it, please click here, and if you'd like to read about container garden winterizing in general, you may visit me at Fern Richardson's Life on the Balcony, where I guest blogged this past December which was mentioned on TLLG.)

One of the things that is not asleep for the season is my Larix Kaempferi AKA Japanese Larch, and he can be seen in the top right hand corner of the image above today's blog entry. As you can see, he looks directly into the windows across the court yard, a fact you may recall, when I wrote about Alfred Hitchcock's Rear Window, a little over a week ago.

Between all the things which I grow being wrapped up as they snooze, and the "neighborhood trees" that surround my building having lost all their leaves for the season, I think it is a lonely time for my Larix Kaempferi. I say this because when I went outside to water him today, he was upset that the soap opera, One Life to Live (OLTL), which he has apparently been watching on the flatscreen televisions in the building across the way, is airing its last episode today.

I was surprised to see that my Larix Kaempferi was so involved in OLTL's story line because he is not the sentimental type, which my Lemon-Lime Cypress pointed out in last Friday's TLLG's blog post. Who'd've of known?

And, moreover, my sweet Larix Kaempferi does not get help from me when it comes to television. I have not owned one since the eighties, although at that time, someone I assisted in personal matters did attempt to give me a television set, insisting that I was hard to reach, but figured if I had a T.V. I might be home more often.

The television she gave me was brand new, and it served as a coat rack for me until one day after Mass, an elderly woman approached me with a worn newspaper advertisement in her hand, and she asked me if I thought it featured a good price for a television. "I have a better price for you, I'll give you mine," I offered, and I have not had a television since.

However, once upon a time, I worked on television, and I even worked on the soap opera, OLTL, which is a fact, dear reader, that you may recall from a prior entry on this blog. When I told my Larix Kaempferi about my experince on OLTL, he wondered why I did not get any autographs from its stars! I truly had no idea that my Larix Kaempferi was such a televison buff, but I should have surmised it, given what he said about Festivus this past December.

Learning of the extent of my Larix Kaempferi's appreciation for movies and television, I may "cast" him in my next garden themed movie, which will be the sequel to The Kiwi Speaks! Fifteen Minutes of Fame . . . almost.

The aforementioned movie was produced last year and it is now on Vimeo. As for my ability to assuage the sad feelings (brought on by the cancellation of OLTL) of my Larix Kaempferi, by discussing the possibilty of featuring him in my sequel, he reminded me that he also suffered from Friggatrtishtkaiedekaphobia, the condition brought on by Friday the Thirteenth as indicated in the opening of today's blog entry.

Apparently, one of the symptoms of Friggatrtishtkaiedekaphobia, is the inability to make business decisions, so I will have to save my having a discussion with my Larix Kaempferi being featured in a sequel for another day, and I will make sure that it is not on another Friday the Thirteenth! For, in 2012, Friday the Thirteenth will occur three times: today, April and July. I elaborated a little bit on this in my morning entries on TLLG's Facebook Page as well as nybg's (New York Botantical Gardens) tumblr, but stay tuned here to follow the details re my Larix Kaempferi being ready for his close-up! Should he accept an offer to appear in on of my films, maybe it will cure him of his "need" to watch television and movies, giving him more time to interact with my Physocarpus opulifolius (Coppertina), I know my working in the film industry did that for me, and I am much more fulfilled observing my Physocarpus opulifolius than I ever was being on camera.
Posted by The Last Leaf Gardener