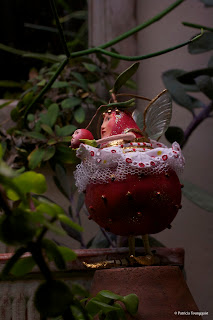 My succulents (pictured above) are having a great time with Lady Prickly Pear, a new arrival to my indoor succulent garden. Various figurines, as you may recall, from my previous posts here on TLLG, as well as on nybg's (New York Botanical Gardens) tumblr, come and go in my succulent garden, but, while they are here, they always add an atmosphere that causes my succulents to thrive.

As you can see in the image at the top of today's post, a few of my succulents seem to be dancing around Lady Prickly Pear. Moreover, early this evening, I thought I heard them gleefully quoting one of the stanzas from T.S. Eliot's 1925 poem, The Hollow Men, which, as you may know, is far from joyous.

But joyous my succulents were, as they surrounded Lady Prickly Pear, singing the following famous stanza:

Thank goodness my succulents were not singing at five o'clock in the morning, but perhaps it was there way of remembering T.S. Eliot. My succulents know that Elliot has been mentioned in a number of blog posts here on TLLG, including one this past April, where I referenced his famous observation that "April is the cruelest month", and, they also know that yesterday marked the thirty-seventh year and one week anniversary of his death, January 4th, 1965.
Posted by The Last Leaf Gardener