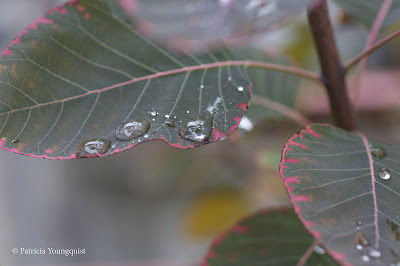 The leaves of my Continus Coggygria AKA 'Smokey Bush,"Royal Purple' or 'Grace' have been glistening with the rain drops from the Autumn rain; as evidenced in the photographs within today's blog entry, which were taken between the second and third week of this October in my urban (New York City) terrace garden, where I have had my Continus Coggygria for at least five years.

'Grace's' leaves are always beautiful, but, I find them even more exquisite when they are playing host to raindrops, and allowing them to rest on their surface. This wonderful shrub not only produces amazing flowers in the springtime, but the colors of its leaves are constantly changing.

For example, in the month of October, this shrub boasts an array of colors on its awesomely textured branches, and, with the rain-kissed leaves it is a very inspirational sight to behold. 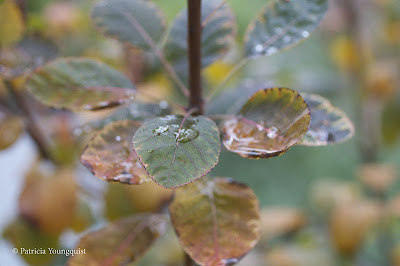 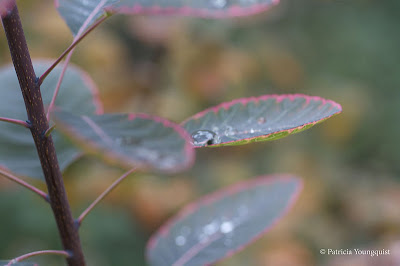 Thankfully, seeing the rain on these leaves has not caused me to run around my garden singing, "Raindrops on Grace leaves" and providing a spin-off to the lyrics "Raindrops on Roses" from the song, My Favorite Things which was popularized in the 1965 movie, The Sound of Music, and I must confess, as un-American, as it may seem, is not one of my favorite things. However, my reasons for this, as they say, are another story!

Meanwhile, the spinning-off lyrics is what it's called when you put a "take" on well known lyrics by substituting your own words. For me, this is an easy habit to fall into, most likely because my father was prone to doing this (as I discussed in a previous post which you may refer to by clicking here).

However, I never heard my father put a spin on the lyrics from My Favorite Things, but, if he had, it would've most likely been in "agreement" with the opinion of the actor, Christopher Plummer (who played the patriarch in the movie), when he feared the movie, The Sound of Music would be thought of as The Sound of Mucus, as he recently (2010) admitted, in an Oprah television segment, which you may read about by clicking here.

Putting a spin on lyrics can be creative and fun but having a song or lyrics get stuck in your head can be annoying. The "condition" associated with this syndrome is known as ohrwurms (earworms).

In an article by Stephanie Watson (which you may read in full by clicking here), the condition known as ohrwurms or earworms "is what can come about when we listen to a song, it triggers a part of the brain called the auditory cortex. Researchers at Dartmouth University found that when they played part of a familiar song to research subjects, the participants' auditory cortex automatically filled in the rest -- in other words, their brains kept "singing" long after the song had ended . . . the only way to 'scratch' brain itch is to repeat the song over and over in your mind. Unfortunately, like with mosquito bites, the more you scratch the more you itch, and so on until you're stuck in an unending song cycle."


Hopefully, my association with the lyrics,"raindrops on roses," will remain at bay, and I will not finding myself humming a tune associated with a movie that brings up bad memories when I notice the raindrops on 'Grace's' leaves, for I certainly have been blessed with the opportunity to capture many images thus far!
Posted by The Last Leaf Gardener