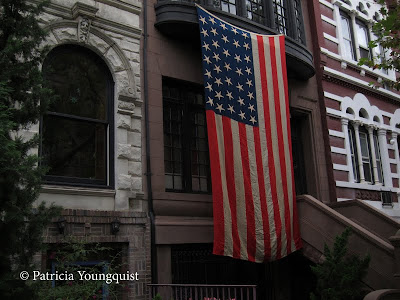 As most of followers of this blog know, as per my schedule, I do not normally post on Sundays. However, when I was walking home from my weekly volunteer work, I happened upon this American flag, hanging from a window of a brownstone that is located on a quiet street, and I thought I'd include it in my blog on this solemn day for anyone who happens to be stopping by the LLG (Last Leaf Gardener); for  my seeing the flag evoked other thoughts that I'd like to share — even though I have written about the events of September the 11th both last year on the ninth anniversary of the attacks, as well as yesterday (on the eve of the tenth anniversary of the attacks).

Presumably, the flag was hung in the window to commemorate the anniversary of the September Eleventh terrorist attacks which took place ten years ago today. Seeing this flag prompted me to wonder if the folks who had hung it from their window, had lost someone near and dear to them in those attacks; and also my seeing the flag caused me to remember that, in the aftermath of the attacks, and for a number of years to follow, someone had hung an American flag in a window of a building which is directly north of where I live and a building that my garden faces.


I recall seeing the flag every day in the window for nearly three years after the attacks; and, to give you a sense of perspective on the relationship of the window to my urban terrace garden, I have taken the liberty of including a photograph of the building I face (which I just took today, hence no flag in that window). 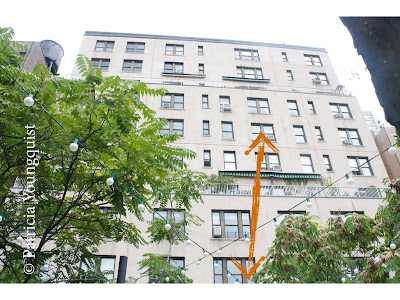 Because my best friend lives in this building (as I have mentioned in a previous blog entry, I have been made aware of the fact that people who live in this building have appreciated my garden (folks living there have expressed it to him, and he has told me); and although I never saw the man (that I later learned was named Josh Rosenthal) who had lived in the apartment with the flag in the window, it is likely that he saw me in my terrace garden.

The image posted below (taken by Juan V) has an arrow (which I have added for purposes of this blog entry) pointing to what must have been Mr. Rosenthal's vantage point. 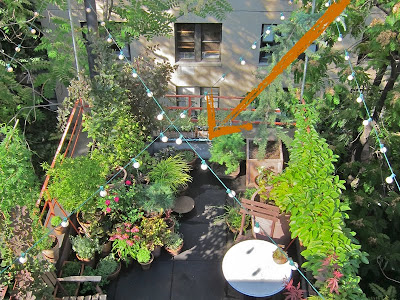 Today as I looked up at that window, the window where there is no longer a flag (because his apartment was sold a number of years ago), I thought of Mr. Rosenthal's family, who, has, since his death in the World Trade Center, had a street — the street where he lived — named for him, as evidenced by the photograph posted below. 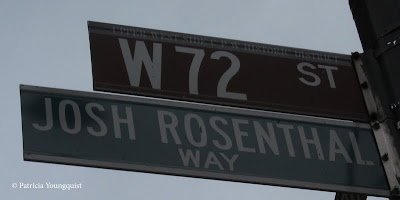 Therefore, even without a flag in the window, Mr. Rosenthal will aways be remembered by those in his neighborhood. If you would like to read about him, I have included a link to a New York Times Portraits of Grief page where you may do so by clicking here, and scroll down until you see the name, Josh Rosenthal.

In by gone years, I wrote about two women (Lashawana Johnson and Margaret Mattic) who also perished in the attacks. I had met when I interviewed for a job at The World Trade Center; thirty days prior to the horrific event.

I am not sure if today's extra posting on my blog offers any insights other than that sometimes when you hear that nearly 3,000 names — names of those who perished at the Twin Towers — were read today at the Memorial Ceremony, it might be hard to get a perspective on the individuals themselves and the impact they had on those near and dear to them. It is my hope that this entry will help to provide that for you, and if you knew of anyone who died on that fateful day, and want to read about them, here is the link to the general New York Times Portraits of Grief  page where you can look them up and read about a slice of their life.
Posted by The Last Leaf Gardener