Nyctinasty: A Flower's Moment of Silence

Because my last posting to this blog commemorated September the Eleventh, it seems disrespectful on some levels to forge ahead (in terms of today's entry), without making some type of segue. Since this is the second Tuesday of September, which is when the attacks took place ten years ago, it seems, on some levels, more of an anniversary of the terrorist attacks than this past Sunday (which was the actual date, and of course, is when the various Memorial Ceremonies to honor those who died in the terrorists' attacks took place).

Perhaps I find myself thinking this way because Sundays and Tuesdays are very different days in Lower Manhattan: on most Sundays it's nearly a ghost-town, while on Tuesdays, especially in the morning hours (the time of day that the planes flew into the World Trade Center), the area is bustling with thousands of people hurrying to work, school, or other obligations. Therefore, this past Sunday when the Memorial Ceremony occurred in Lower Manhattan, while it was a day set aside for solemn remembrance — as it should be — it might have been hard for those who are not from the New York City area to have a sense of the effect that the September the Eleventh had on those who were not working at the World Trade Center, but who by way of their daily routine witnessed the horror: the ones who worked in areas surrounding the World Trade Center, or who went to school near there, or who were there for other obligations. They were also deeply affected upon seeing the devastation and witnessing persons jumping out of the burning Twin Towers.
Moreover, the atmosphere was busier than usual that fateful morning, because on September 11th 2001, the Democratic Primaries (for the office of mayor) were taking place; and many folks were up even earlier than usual to vote before heading off to their respective agendas for the day.

Others, like Natalie B, my confirmation sponsor's wife, were frantically taking care of their personal tragedies. Although Natalie B lives in the Upper West Side of Manhattan (a good distance from Lower Manhattan), she was very much affected by the events that took place on that somber morning. In Natalie's case, she had received word that her husband (who had been in the hospital for several weeks prior) had taken a turn for the worst and was in the last hours of his life; so she needed to get to the hospital quickly. The hospital where her husband was staying is located on the East Side of Manhattan; and Natalie lives on the West Side of Manhattan. When the call came from the hospital, informing Natalie (who was in her late seventies at the time) of her husband's imminent death, she had been listening to the coverage of the planes flying into the Twin Towers, but details of the full extent of what was happening were not yet available, so she was shocked when she went outside of her apartment to "grab a cab" to go to the hospital, to find that there were no available taxis. Hence, there she stood amongst the honking of car horns; sirens from ambulances that raced by her; and the scurrying of pedestrians all babbling excitedly as they wondered if a third world war was upon us. Some wondering aloud if the world coming to an end. The only thing that Natalie knew at that moment, was that her world, as she had known it in over fifty years of marriage, was coming to an end. Her husband had been given last rites and she did not know if she could get crosstown to see him one last time! That is when Natalie experienced a New-York-kindess-of-strangers-moment: someone allowed Natalie to get in their cab — even though it was headed another way — and so she was able to get to the hospital to be with her husband as he  ultimately "joined" those who died on September 11th 2001, that second Tuesday of the month of September.

Natalie's story is one you don't hear in the coverage of the reading of the names of those who lost their lives on that fateful day, and it is one you don't hear in the poignant accounts of the hundreds and hundreds of children who lost a parent, but Natalie's story, and others like hers, are important too. And, so, in light of the aforementioned narrative, I'd like to request moments of silence for others who, like Natalie, lost someone on that day, because their private mourning of their individual loss may have taken a "back burner" in light of the events of that fateful day.

Additionally, I know people including Ana D, Andrew J, Terry M, as well as Patricia Ruggiero, the secretary of Saint Peter's — the church which "housed" Father Mychal Judge's broken body — who were all working in Lower Manhattan on the morning of the attacks and, therefore, witnessed both the burning buildings and the people jumping from them. It must be difficult for them, and the hundreds and hundreds of people like them who witnessed this to get those horrific images out of their mind — even after all this time has passed. These folks are not included in the ceremonies; and I realize for security measures there must be a limit, but they still need moments of silence in their honor too. Moments of silence are something that provide great value; and even the flowers that I grow in my urban terrace garden seem to realize it.
For example, the normally — dare I say it  — perky flower, from my Ipomocea sloteri AKA Cardinal Climber Vine, (a vine mentioned in a few of my previous blog entries which you may refer to by clicking here and here as well as here and here)  knows the value of quiet time.

In the early evening hours — when it is still only dusk in New York City, "the city that never sleeps", and folks are enjoying their cocktails on their terraces — my Cardinal Climber is nodding off for the night, from where it lives on a trellis in my urban terrace garden (as evidenced in the photographs posted below). 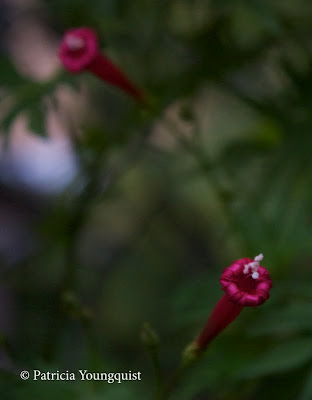 The "process" of flowers closing up at dusk and into the night is called nyctinasty. When I was new to gardening, and did not know what was happening, I was horrified to see flowers close up because I thought that they were dying!

Later, as I had more experience gardening I was no longer horrified to see my flowers close up, as evidenced by my taking the opportunity for a photo-op which can be seen in the photographs of my "slumbering" Cardinal Climber, that are posted below. 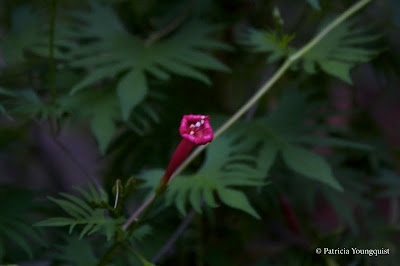 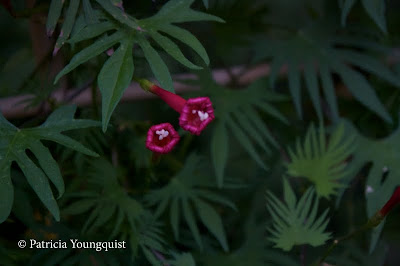 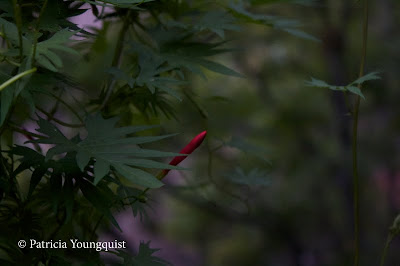 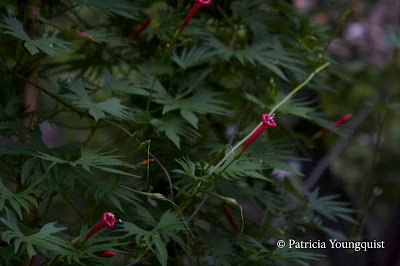 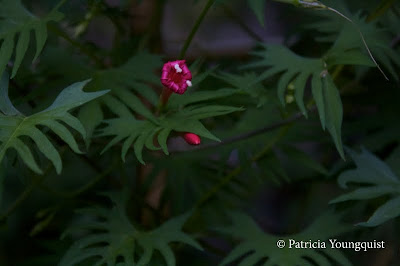 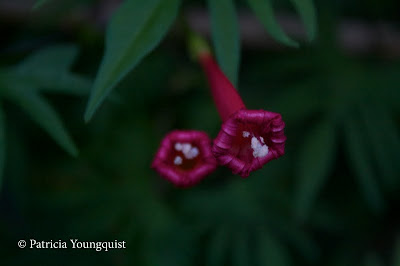 I appreciate your indulging me by allowing me to share so many images, as my doing so borders on a parent or grandparent showing pictures of their little ones in play by play format. Still my Cardinal Climbers are awful cute, don't you think?

However, besides their being cute, their habit of shutting down, or giving into nyctinasty, is an illustration of what flowers can teach us humans about life, and of  the upmost importance in having moments of silence. May God be with you, dear reader, in your moments of silence as you perhaps pause to remember losses that don't make it to the media's coverage; and I by no means intend to show disrespect to those losses that do receive recognition; for loss is painful, both spoken and unspoken.

And with these thoughts, dear reader, I will return to my regularly scheduled programing of blog topics, on Thursday, September 15th 2011, my next scheduled date to post.
Posted by The Last Leaf Gardener