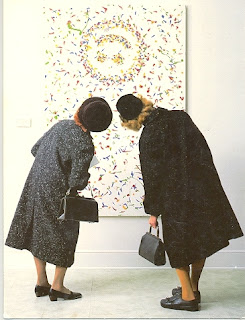 As most people know, the 2010 winter solstice will occur tonight December 21st, 23:38 (11:38 PM), Universal Time. The winter solstice is the darkest day of the year in the Northern Hemisphere. However, it also signifies the coming of lighter days and often brings on a festive mood. Religious leaders have used the coming, of more light as an analogy to Christ's coming bringing more light with his birthday celebrated on December 25th, Christmas Day. It is a comforting thought on the surface for believers, unless one thinks about that too long. For isn't His  birth proclaimed in a hymn's lyrics as "joy to the world?" Not all of the world experiences the December winter solstice in this manner. For example, our Aussie friends and Brazilian comrades are usually in the midst of summer at this time. The various ways to perceive ideas are never ending, as the illustration (posted above) by Dennis Kitchen — though not based on the solstice — depicts.
Posted by The Last Leaf Gardener