Following up on Brian Lehrer's Question: "What are you putting yourself through to get to where you are going on Christmas?" 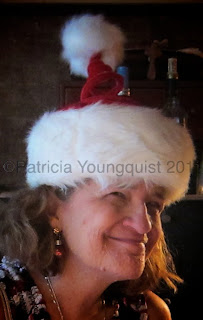 Yesterday on The Brian Lehrer Show (WNYC, AM Radio), listeners were invited by Brian Lehrer to call in with an invitation to "tell us the lengths you're going to in order to get to family and friends this holiday season. Are you taking a super long flight or multiple forms of transportation? What are you putting yourself through to get to where you are going on Christmas?"

The invitation to do this was prefaced by Brian Lehrer telling us the great lengths his producer was going to to get to the island of St. Johns for Christmas.Hard to top going to St. Johns and the oh-so-cool itinerary that Lehrer's producer would be following, but, thankfully, a couple of callers did.
One man described an ordeal he would go to to visit his incarcerated son — as he apologized for his travel being a distance of  "only five-hundred miles" — (seemingly to the caller not as intriguing as a radio producer's journey to a warm island in the cold month of December) and the caller gave the poignant details of what was involved in the clothing he had to wear to visit his imprisoned son to ensure he'd be allowed (by the prison officials) to make the visit. The pain of such a visit was in the caller's voice; though he did not directly express it, rather he offered his call as a way of reaching out to others who might make such a visit on Christmas if they weren't so fortunate as to travel to places like St. Johns.

Another caller told us listeners that she would be on a plane for fourteen to fifteen hours, traveling to India. She went on to say that she would "be met at the airport by a relative that was a Sephardic Jew, then driven to a family party where a lovely Christmas dinner would be enjoyed by all in a country where it was still politically correct to say, 'Merry Christmas.'


I say this because the day before Lehrer's 'Christmas-travel-call-in,' I was at a seminar at the terrific Apple Store in the Upper Westside of Manhattan (where I recently gave a presentation about the construction of my on-line brochure, as described in previous posts which you can read by clicking here and here), when a trainer asked me, "Do you celebrate Christmas?" The trainer explained that he asked me in this manner because he was afraid to say "Merry Christmas" to Apple customers for fear he'd offend them.

But getting back to Brian Lehrer's question: How far will I travel on Christmas to visit those near and dear to me? Like the caller who will be visiting a son in prison, my Christmas travel will not take me to what a travel agent would call exotic. I will put on my 'Christmas-bonnet' (as seen in the photograph of yours truly at the top of this entry), then travel out of my studio apartment, down seventy steps that lead from my apartment to the ground floor, walk out the main door, then up two steps, turn right, and walk west a few yards, then turn north and walk up four blocks; from there I will head west for two blocks before arriving at my destination: an assisted living center where I have visited a homebound community every Sunday and on special holidays for a little over five years.

Once inside the assisted living center's doors, I will take an elevator (now this part of my 'journey' may take me as long as a trans-Atlantic flight, as the elevator is very undependable) to a community room where the residents will be seated eagerly awaiting the Christmas message of tidings of comfort and joy; and, as always, I will leave the assisted living center with thoughts of much thanksgiving for the opportunity to be in such a humble environment and will find it a beautiful way to spend Christmas —even though I won't have the sun-tanned look of the Brian Lehrer Show's producer, which he will presumably have as a result of his Christmas journey.
Posted by The Last Leaf Gardener