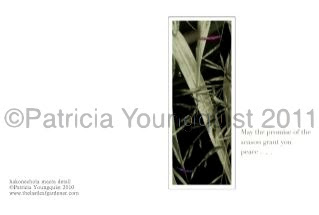 Today is the Fourth Sunday of Advent, a season that began on November 28th 2010.  Dennis Bratcher writes,"the fourth candle of the advent wreath is lit on this day and the light of these candles reminds Christian believers that Jesus is the light of the world — the light that comes into the darkness of people's lives to bring newness, life and hope. It also reminds people that they are called to bring light into the world, and to reflect this grace to others. The progression in the lighting of the Advent candles symbolizes the aspects of waiting, as the candles are lit during the four week period, it also symbolizes the darkness of fear and hopelessness receding as more and more light is shed into the world." Even though I have done volunteer work by bringing Holy Communion to the homebound every Sunday, as well as special feast days, for the past five years, I confess I still struggle with having the faith Bratcher describes.
However, I do design and sell holiday cards, but I like to wait until Advent has passed before sending mine, out of reverence to the message articulated in Bratcher's writings.

This year I have designed a card to commemorate Christmas by employing an aspect of botanical textures (a garden feature I wrote about in November), of one of my urban garden plants; Hakonechola Macra (Japanese Forest Grass: All Gold Variety), using a photograph (taken before my plants were snuggled in for the winter as described in a recent post).


I have rendered this image in a gradient of black and white then brushed in a twinge of color so that only two sprigs coming from the leaves have a hint of color. I have done this as a representation of light breaking into darkness, and hopefully conveying the meaning of the promise of Christmas, as described by Bratcher. I have made two versions of this card and the result can be seen in the photographs posted above  and below today's blog entry. 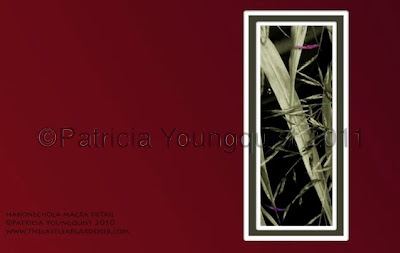