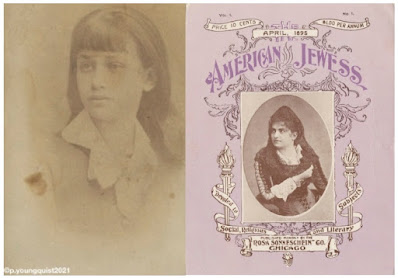 On this Yom Kippur, the holiest day in the Jewish faith, I am reflecting on my ancestors.

Having said this, I should mention that I was not brought up with any practices in Judaism. I knew nothing about my Jewish roots until I was in my thirties and living in New York City.

Getting back to my ancestors, Fanny 'Wink' Sonnenschein, my father's grandmother, and my great grandmother, had an eye afliction. One of her eyes performed so much less than the other that it caused it to turn completely inward; and she was ultimately nicknamed Wink, by her mother, Rosa Fassel Sonnenschein.

Images of both Fanny and Rosa Sonnenschein are featured in the collage atop this entry.

Fanny is at the left, Rosa is at the right. Rosa Sonnenschein was the "flamboyant editor and publisher of The American Jewess, the first (1895) independent American Jewish magazine, published by a woman" and dedicated to issues concerning women.

I am not certain if Rosa had poor eye-sight and perhaps if she had an affliction, she hid it. However, from what I understand about Rosa Sonnenschein, she was not shy about who she was or what she stood for. This is evidenced in a description that is on the backside of the image I've included in the collage atop this entry. 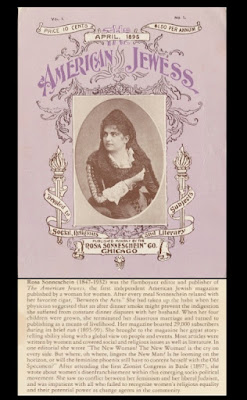 I realize that text is hard to decipher so I've taken the liberty of posting a copy of it directly below:

Rosa Sonneschein (1847-1932) was the flamboyant editor and publisher of The American Jewess, the first independent American Jewish magazine published by a woman for women. After every meal Sonnenschein relaxed with her favorite cigar, 'Between the Acts.' She had taken up the habit when her physician suggested that an after dinner smoke might prevent the indigestion she suffered from the constant dinner disputes with her husband. When her four children were grown, she terminated her disastrous marriage and turned to publishing as a means of livelihood. Her magazine boasted 29,000 subscribers during its brief run (1895-1899). She brought to the magazine her great story-telling ability along with a global view on people and events. Most articles were written by women and covered social and religious issues as well as literature. In one editorial she wrote 'The New Woman! The new Woman! That is the cry on every side. But where, oh where, lingers the New Man? Is he looming on the horizon, or will the feminine phoenix still have to content herself with the Old Specimen?' After attending the first Zionist Congress in Basle (1897), she wrote about women's disenfranchisement with the emerging socio-political movement. She saw no conflict between her feminism and her liberal Judaism, and was impatient with all who failed to recognize women's religious equality and their potential power as change agents in the community.

I was sent this information re Rosa by my great uncle David Loth.

By the time I met David Loth, I was in my thirties and he was eighty-six years old. I was able to meet him on only two occasions prior to his death, and he had much to say about this background, including the fact that Rosa's husband, Solomon Sonnenschein.

Evidently, Solomon was "a child of the first night," and because of this, it wasn't thought he would go to rabbinical school; much less study at Jenna, or that he would be a successful Rabbi in Warasdin (Prague), prior to coming to New York City, where he was a successful Rabbi, before founding a synagogue in Missouri.

My great uncle David Loth, was afflicted with very low vision, but was not deterred from a successful journalism career as he used devices to help him read.

Thankfully, as you may have heard in my radio interviews, I've also been able to adapt equipment to accommodate my needs as a result of being afflicted with four eye conditions (Keratoconus, Monocular vision, Optic atrophy, and Staphyloma).

However, in addition to inheriting eye afflictions from my ancestors, I inherited an ability to write; which I hope is evidenced within this blog, as well as my within my recently published digital book, BIRD TALES and my three volume hardcover book series, Words In Our Beak. 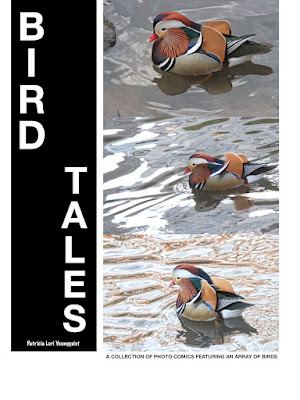 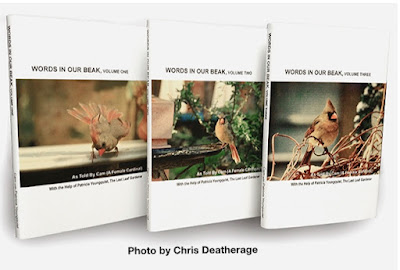 On another note, in addition to my being born with these four eye conditions, I was born with Neurofibromatosis.

I've written a book length piece (titled Imperfect Strangers) about the personal —  yet universal — consequences of growing up with this nerve disorder, as well as the effects of not learning about my Jewish roots until I was in my thirties, but that story is for another blog post...and speaking of forthcomig blog enteries, I will not be posting tomorrow or Saturday but I'll see you on Sunday, 9-19-2021!