A stool finds another purpose in life. 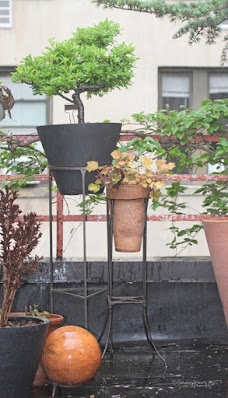 A little over one month ago here on Blogger I published a post discussing how Juan V was able to help me turn a broken wooden top of a stool into a plant stand, which ultimately held a container that housed one of my Heuchera plants. In this aforementioned blog post, I included a copy of the photo which is atop this entry.
Unfortunately soon after this a woman who was visiting my garden knocked over the  stand and my Heuchera's pot shattered into several pieces.
Subsequently this plant was able  to be repotted  — but not into a container which fit the stool turned plant stand's constraints.
In the interium I placed an empty claypot into the stand but have not been able to plant anything in that spot. Therfore during our recent tremendous heat wave, I placed a shallow bowl of water atop the empty claypot.
My intention in doing this was to provide yet another place for visiting birds to take a drink and/or to bathe in my garden which is something they need to do more than ever during tremendous heat.
I am thrilled to say that a lone American robin took advantage of my new accomodations, as evidenced in the next sequence of pictures. 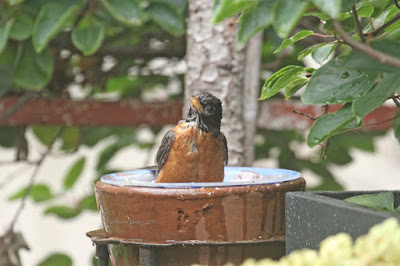 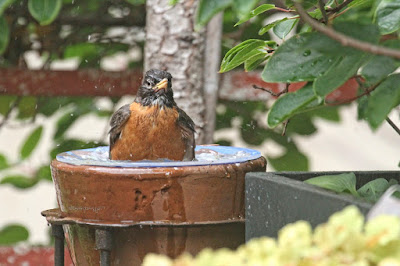 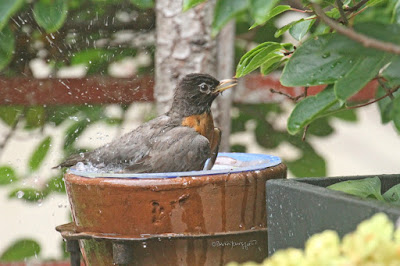 On another note, the American robin (plus many more avian varieties) are included in my three volume hardcover book series, Words In Out Beak.
The goal of these books is to open readers to a simple understanding of the winged world and their environment. Set in a rooftop urban garden (mine) in New York City, my story is told in the voice of Cam, a female cardinal, who visits it. Words In Our Beak is directed to children and adults who are curious about birds, and want to learn about them from a unique perspective.
Posted by The Last Leaf Gardener