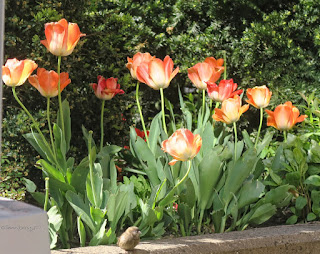 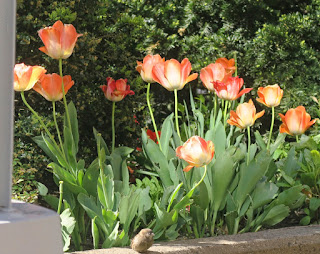 The other day when I was on Broadway I noticed some tulips swaying in the wind, but it was not until I put my camera’s memory card in the computer that I noticed a young female House sparrow had been catching some rays alongside those flowers.

This ubiquitous bird type truly gets around the city, which is something one of her comrades confessed to E.B. White when he interviewed and asked a sparrow about why those bird types chose to live in NYC. 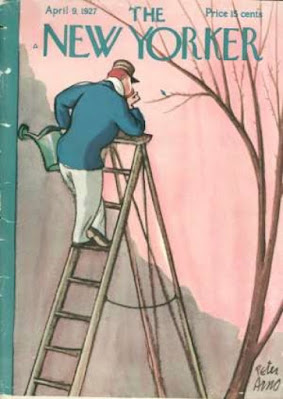 ... about this encounter and it can be read on line, if you have a subscription.
I do not subcribe to that publication, but I have read his essay, INTERVIEW WITH A SPARROW, on countless occasions as it is included in a book by my bedside.
On another subject, both tulips and sparrows are included in my book series, Words In Our Beak includes hundreds of images of flora and fauna.

Regarding sparrows, in addition to featuring them in my books, I've published many blog posts about them, but I've just read an article that points out there is a holiday dedicated to these avian creatures and it is known as World Sparrow Day.

This article points out "little-known facts about Sparrows that will surprise you."

Here is their list of sparrow facts (some I knew others I did not:

They are chirpy, with grey and brown colour.

They have the ability to fly at the speed of 38.5 km/hour and can even reach a speed of 50 km/hour.

Males and female house sparrows can be easily distinguished by the feather colouration: males have reddish backs and a black bib, while females have brown backs with stripes.

Sparrows raise three nests of 3-5 eggs. Both male and female help to incubate the eggs for 12-15 days. The fledgelings usually fly out after 15 days.

Sparrows cannot be found in forests or deserts, unlike other birds. It prefers being in close association to human settlement, including urban and rural areas. They inhabit on ideal sparrow habitat nesting on buildings, roofs, and houses.

Once found in huge numbers across the world, the small bird is slowly making its way to the endangered list.

Sparrow is a symbol of loyalty in Japan owing to its friendly nature and ability to live in groups.

Sparrows can survive between 4 and 5 years in the wild.

The oldest sparrow recorded till date is known to live for 15 years and 9 months!

House Sparrows have the capability of swimming underwater! Even though these birds are not water birds, it is observed that they can actually swim underwater to move from one place to the other.

These birds are aggressive and social, which increases their ability to compete with most native birds.

House Sparrows love to play with dust and soil. They spoil themselves in the dust as if trying to have a bath with it.

Male sparrows dominate over females during fall and winter, while females dominate during summer and spring.

House Sparrows, when nervous, flick their tails to ease out the tension.

As you may know, dear reader, house sparows are the inspiration for the gospel hymn, His Eye Is on the Sparrow is a gospel hymn written in 1905 by lyricist Civilla D. Martin and composer Charles H. Gabriel.

It includes the he following lyrics:

...Why should I feel discouraged, why should the shadows come,

Why should my heart be lonely, and long for heav’n and home,

When Jesus is my portion? My constant Friend is He:

His eye is on the sparrow, and I know He watches me;

His eye is on the sparrow, and I know He watches me...

However when I was doing a little bit of spring cleaning of my Mac's Photos Library, I came across this next picture... 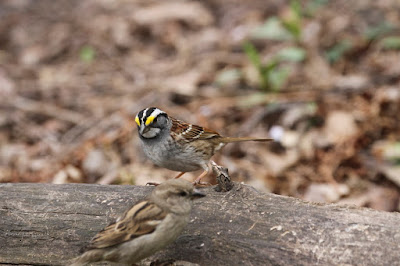 ... which features a White-throated sparrow who has his eyes on a young female House sparrow and his intent may not be to offer comfort as lyrics from "His Eye is on the Sparrow" suggest. Not to judge the intention of the White-throated, but just before he fixed his eyes on the young House, he pecked at the tail of a  Tufted titmouse (as evidenced in the following picture). 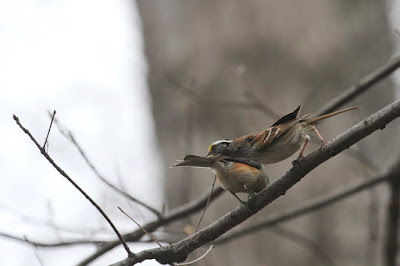 And there you have it dear reader, some fun and not so fun facts re this little creature who holds so much meaning to writers of scripture, writes of songs, writers of poems, writers of articles and writers of books.