A Thing or Two re Male House Finches 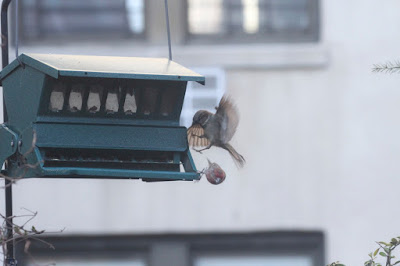 Upon my seeing the sighting (featured in the image directly above) of a male House sparrow and a male House finch at a bird feeder, I am reminded of something that  I've just read:

"Among the feeder birds of North America, few are as recognizable and widespread as the House finch and House sparrow. The House sparrow, originally from Europe, is one of the most well-established invasive species in the United States. The House finch, however, is invasive in its own right. Originally native to only the western United States and Mexico, it has spread rapidly through the east since a small number of caged birds were released in New York in 1940."

This reference doesn't give due diligence to the plight of  House finches who were once pegged was "Hollywood Finches" when sold illegally as pets. Plus House finches were nearly wiped off the Eastern seaboard due to a a type of conjunctivitis.

In terms of male House finches, while their coloring is bright red, the colors of the female are  muted giving them a protective camouflage. Deep red coloring in the males of this bird type indicates they are healthy and might make good partners and fathers to their children. Perhaps this is what is on the mind of the female house finch featured in my photograph (titled Dinner for Two) during her date.

It has been rendered on to a note-card by Fine Art America (AKA FAA).

By the way, FAA can also render the images on to an array of surfaces for wall art.
These include acrylic...

Moreover they also offer framed images of my collection.

Moreover, House finches as well as an array of bird types,  (nearly thirty-five including House sparrows) are discussed in my book series, Words In Our Beak.
Posted by The Last Leaf Gardener