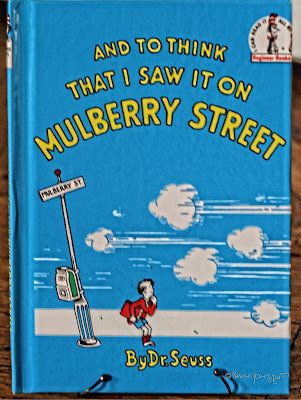 Welcome to my 207th episode of my Tuesday's Truths series, which is coinciding with the day Dr. Seuss was born (117 years ago.) As I've mentioned in prior posts about this author/illustrator, my admiration for his storylines and his talents as an illustrator go hand in hand with my admiration for  his perseverance, which is evidenced in his getting his first book published.
That book, as you may know, is And to Think That I Saw It on Mulberry Street and a photo of the book can be seen in the image entry. It was Theodor Seuss Geisel's first children's book published under the pen name Dr. Seuss.

As I've mentioned in a number of posts here on Blogger, "at least 20 publishers rejected the book before Geisel ran into an old college classmate, who had just become juvenile editor at Vanguard Press. Vanguard agreed to publish the book, and it met with high praise from critics upon release."

Sadly today I learned that And to Think That I Saw It on Mulberry Street, and other select Dr. Seuss books will no longer be published as some images in them are now considered to be racist. Reports of this latest news can be found in a number of places including The New York Post, as well as in The Associated Press, and in a clip from CNN.

This news is kind of hard to believe and I think any slurs towards any group were never part of Seuss's intent. Hopefully his legacy will be untarnished and people will focus on the joy and insights he brought to countless readers.