The photo atop this entry features a pair of Canadian geese walking on a sheet of ice that is covering a lake in Central Park. I was surprised to see this happening as this bird type can often be seen trying to keep their feet warm.A way that they do this one to stand on one foot and tuck the other one under their breast, as evidenced in the following pictures. 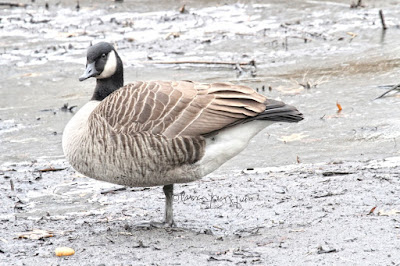 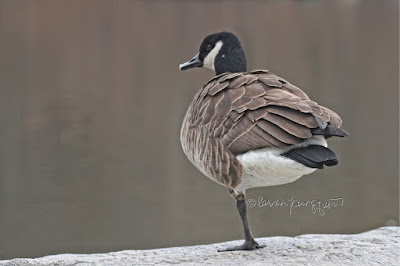 Doing this action to keep warm was impossible for Kaitlin, a goose who lost most of her right leg to fishing line while swimming in Central Park's Boat Lake. Apparently this accident occurred a years ago and her mate, a faithful gander, remains at her side as he attempts to protecting her from harm, as seen in the next photograph. 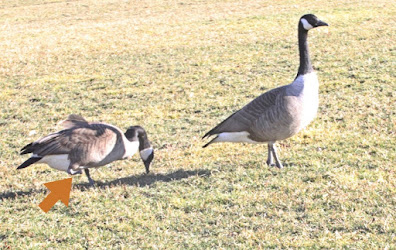 If you'd like to learn more about this avian couple's compelling story, it can be found in my article, The One Legged Goose and Her Faithful Partner, which was published by ilovetheupperwestide.com
Not only are Canadian geese loyal partners, they both take part in the parenting of their goslings as you migh surmise upon seeing the following image. 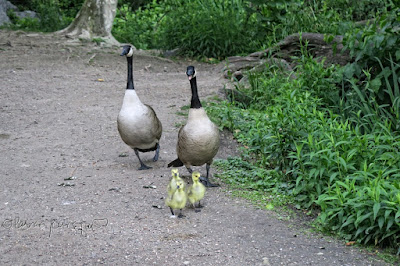 This image along with others of a Canadian geese family is featured in volume two of my book series, Words In Our Beak (AKA WIOB).
In any event, this bird type is on my mind today because this last Friday, January 15th,  (which also happpened to be Martin Luther King's birthday), marked the eleventh anniversary of The Miracle on the Hudson, when Chesley Burnett "Sully" Sullenberger III had to make the difficult decision to land US Airways Flight 1549 in the Hudson River off Manhattan after both engines were disabled by a bird strike by Canadian geese. All 155 people aboard survived.
As stated in many articles about the event, including one published in The Guardian, the outcome wasn't so good for the geese.
Posted by The Last Leaf Gardener