I’m offering this blog post as a follow-up re the status of an injured pigeon whom I initially discovered in my garden this past Saturday (10-10-2020) and whom I spoke about in Monday's (10-12-2020) entry here on Blogger.

The collage directly above gives a pictotial overview of the pigeon's fate, and below is a copy of what I baiscally said (italicized text) about it on Facebook:

As of this posting, my injured pigeon, now named TAM,* after the people who weighted in on what I should/could do and someone who helped me capture him (for transporting to The Wild Bird Fund (WBF).

[*TAM: “T” for Tina Pina, pigeon advocate and artisan, “A” for Amanda Remsberg, bird re-habber, and “M” for Martha, AKA MB, the woman who helped with my rescue.]

MB can be seen in the next photograph (which was taken in 2016) where she is standing in my garden. 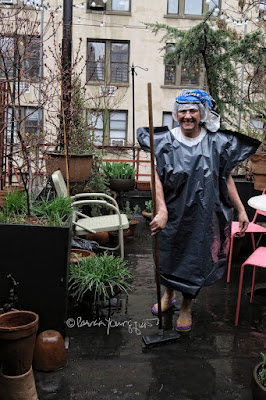 We were working in my garden during a time, the now often full-time wearing of face-masks could never have been imagined. However, re-purposing plastic bags into rain gear was quite the norm.

In any event, the weather, was very similar to the conditions taking place in March of 2016 and when an attempt was made to sweep/clean behind the container housing my Smoke Bush (which is a large dark-green box seen to MB’s right in the image, or to the lower left in photo view), a dead pigeon was discovered.

I began to weep, and MB, unaware of my recent experiences in discovering an injured pigeon, warned me to take it easy. As the work in the garden continued, a planter that is home to my fall blooming anemones which butts up against a large planter that is now housing my Sweet Autumn Clematis and toadlilies (seen in the following image)...

... was moved and in doing so, my injured visitor’s hiding place was discovered and she was able to pick him up and set him in my bathroom..

...until we could (within an hour’s time) take him to The WBF.

Alas, I had no brown paper grocery bags on hand as I don’t buy many groceries and when I do, in the interest of recycling take a bag from any store as I carry a cloth bag. Therefore I lined a box with one of my bedsheets, placed the pigeon in it.

Then I put his box in a Christmas gift bag — the only bag I had on hand — for transporting.

... where the intake person mentioned how remarkable it was that this creature survived the heavy rains of the past few days.

Out of an abundance of caution, convo exchanges between rescuers and rehabbers is extremely minimal and I neglected to ask how I might follow-up on his condition (they do not take phone calls).

Moreover, I “coulda” offered to release him in my garden, but the thought did not occur to me as I was focusing on helping him get the care he needed at the time.

On another note, my first experience in rescuing a pigeon and having him transported to The WBF is included in volume one...

... of my three hardcover book series, Words In Our Beak.

I hope Tam will recover as one of my other rescuees (named Thursday) did under the care of The WBF, and if I'm able to find out Tam's prognosis, I'll be sure to post it on Facebook and on this blog.
Posted by The Last Leaf Gardener