Fred (or Freddie), A Touring Pumpkin 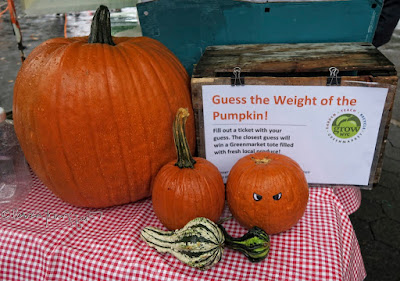 It's been a very rainy (understatement) chilly day in NYC, but that didn't stop Freddie the pumpkin from continuing with his greenmarket tour.
He's been making the rounds (visiting various greenmarkets in NYC) since the first Sunday in October (when he debuted — wearing a face-mask — at the Greenmarket alongside The AMNH (American Museum of Natural History) on the UWS.
He wants people to guess his weight and whomever comes the closest will win a bag of local produce.
Contestants write their guess along with their name and contact info on a piece of paper and give it to the person monitoring his space.
And evidently, on this Saturday, which is the last Saturday in October, the winner will be annouced at the Greenmarket at Tucker Square and where I saw him today).
You would think with the array of pumpkins that are in my garden, which I've carried up five flights of stairs, that I might have an idea, but I don't, I just put down a wild guess, for you have to be in it to win it as the saying goes.
Posted by The Last Leaf Gardener