My maternal grandmother, Clara May Fitchie Melahn, was born on this day of July 23rd in the 1900. She always hated the fact that she was born within that year because her age could be calculated so easily. In any event, she can be seen (standing at the right) in the back row with her siblings in the photo atop this entry (which has been featured in a number of entries here on Blogger).

As a young woman, she worked as a nurse...


... which is where she met my grandfather (he was her patient in the hospital) and ultimately left her profession to raise her three children, which included my mother. Years later, yours truly, her first grandchild, came into the world on one of her wedding anniversaries.


My grandmother died in 1987 and her last words to me, which I heard from a phone booth that was in the lobby of a rooming house on the UWS, were, "You should get back to your writing."

I ultimately heeded her advice and as many of you may know, have had my three volume book series, Words In Our Beak, published by Ingram Spark.

My other book length piece, Imperfect Strangers, features my grandmother in a few chapters. At the moment, I don't know the status of where it stands with the publisher... 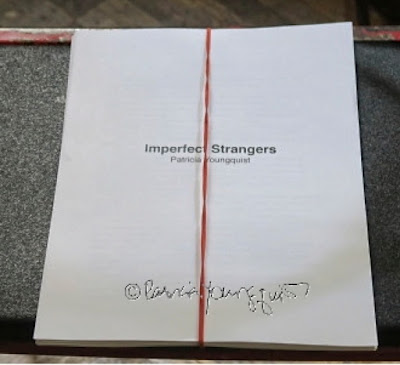 ...because they received it a few days prior to NYC being put in lock down.

Imperfect Strangers discusses growing up with the condition of NF (Neurofibromatosis) and I've posted a video re my endeavor which can be viewed within my Vimeo channel as well as my You Tube channel.


It has been an especially challenging (understatement) time for me for the past six years (at least) but I am persevering. I know my grandmother had to persevere too (Don't we all?) but I truly hope that I will see publication of Imperfect Strangers, and that the book will lead to raising awareness of NF as well as the consequences of spoken words.
Posted by The Last Leaf Gardener