I'd like to begin this entry by saying that three months ago yesterday (Saturday June 27th 2020) marked the date #ClapBecauseWeCare sessions began (3/27/2020) in NYC.

I initially learned about the tribute a few days after the fact and subsequently began participating on a nightly basis two days later on March 29th, 2020 so my three month anniversary of doing this is tomorrow. June 29, 2020.

As I've been discussing within a number of posts here on Blogger, my participation and cyber "coverage" of these tributes is a small way to pay homage to first responders, healthcare professionals and essential workers who are keep working tirelessly (through all kinds of weather) for everyone during this COVID-19 (coronavirus) pandemic.

During the course of these nightly sessions, I've become aquatinted with a few people I'd never met, such as Giuseppe and Teresa, seen in the image atop this entry. They posed for me after the session last night which was the eighty-ninth one.

Giuseppe and Teresa have been staying in the building directly east of me and I initially met them on April 7th, 2020, when I participated in my eleventh session, and after the session on that evening, Giuseppe — through his window which faces my garden where I was standing — introduced himself.

At that time I learned he and his wife are in a short term rental as they are here from Italy and Spain. I've talked with them on nearly a nightly basis since meeting them on April 7th so it is with sadness that I write, unfortunately for me, they will be moving out of their temporary gigs in a few days and going into a place near the Morgan Library. The Morgan Library is in the Murray Hill area of Manhattan so I will still be able to see them from time to time but I will miss their presence  in the window, as well as the presence of their cat, Snooze, who can be seen in the following picture.


As the date of their moving draws closer and closer, we are in agreement to following the wisdom of Dr. Seuss which is featured in the picture directly below. 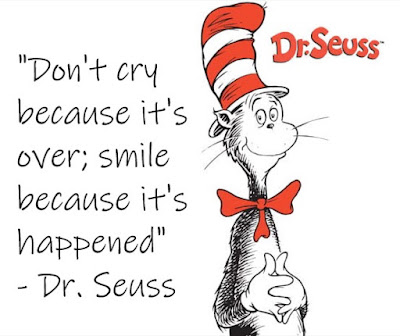 I suppose Giuseppe, Teresa and I adopted this Seuss philosophy because during many of the sessions, I wore a Dr. Seuss-themed hat (based on his book, Green Eggs and Ham).

This can be seen in a video of a #ClapBecauseWeCare session (posted below) which was filmed by Giuseppe.


In any event, during last night's (Saturday, 6-27-2020), 89th tribute, we didn't see other participants, other than noticing KA was still continuing her near-nightly ritual to record #ClapBecauseWeCare sessions; as evidenced in the next photo-op.


Perhaps because KA has a perspective from a high-rise window facing south, she is seeing activity that Giuseppe, Teresa, and I cannot see from our relatively low vantage point facing north (as you might surmise from the next photograph taken by Julie Tersigni during a session prior to her leaving NYC for a few months.


As you can see, I am wearing my Dr. Seuss-themed hat (Green Eggs and Ham ) as I clap and cheer while standing in my rooftop garden. Moreover, if you look at the picture closely, you will surely notice an arrow I've affixed to it.

That arrow indicates Giuseppe and Teresa participating in a session — also illustrating how close the apartment where have been living is to my place.

But getting back to last evening's session, as I've said, it was not well attended — if at all —(at least from my perspective) and that has also been the case for session 87 (Thursday, June 25th) as well as session 88 (Friday, June 26th) which were seemingly recorded by KA, as evidenced below.


I presume the lower attendance at these sessions can be attributed to a few factors.

One is that demonstrations and protests re the death of George Floyd have dominated events in our city ever since the time of Memorial Day weekend.

Another factor is that on June 1st, which was the onset of PHASE ONE, NYC reopened, ever do slightly, and because people had been adhering to sheltering in place since March, many needed to start to catch up on errands and other things that they had not been able to address during lockdown. Moreover, it's summer time and many people leave the city during this time; although our numbers are lower than most places and it may be best for these get-out-of-Dodge folks to stick around this summer.

Whatever the reason for attendance winding down, it is surely NOT for lack of appreciation which will hopefully continue, albeit without applause.

People are finding ways to make gratitude to our first responders, healthcare professionals as well as our essential workers. One instance of this can be seen in the way in which a UWS-er has decorated his brownstone (seen in the photograph directly below. 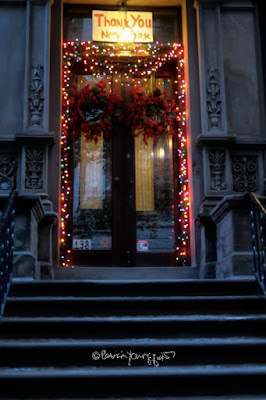 The man who put up these lights tells me, he will leave them up,"until at least Christmas."

While this man's "installation" is heartwarming (understatement), the MAIN way anyone can show appreciation going forward is to WEAR A FACE-MASK and I hope some will consider wearing one's I've designed, seen in the next sequence of photo-ops, where satisfied clients are wearing them.

Now that many parts of the various parts of my country are in different stages of re-opening, the wearing of face-masks will be mandatory in many circumstances.

As you may know my face-masks are available via Fine Art America (FAA) and I have (as of now) four styles which can  be seen within photos included within this post.

The one being worn below has Hope: Rays of Light, one of my kaleidoscopic photographs, printed on it.


Information about this image and different the surfaces that it can printed on is available via FAA.

And information about my Hope: Rays Of Light mask info can be found on FAA's sister-web-site.

The next photo features my mask which is dragonfly themed. It is based on photo that I took of this insect in nearby Central Park. The image is from my collections of dragonfly photographs that can be found within my pages on FAA's website.


Meanwhile, more info re this mask can be found on FAA's sister-web-site.  And the following one features one of my black and white impressionistic photographs titled Good Friends.


[For your information, I have other images of my black and white  photographs in my collection on FAA and they can be printed on an array of surfaces for wall art, and/or on items for personal use. Meanwhile, more info re this mask can be found there or on FAA's sister-web-site.]

The next sequence of photo-ops feature my cardinal-themed mask.


The pair of cardinals featured on this mask are included in all three volumes of my book series, Words In Our Beak.


In any event, more info on these masks can be found within my press release. I''l leave it here for today, dear reader, but not before saying, I hope you and yours remain safe and healthy during this mind-bending time.
Posted by The Last Leaf Gardener