A Displaced "une citrouille" or "un potiron?" (Wednesday's Wisdom re Halloween in France) 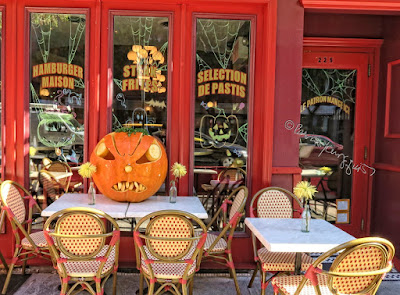 Before this Halloween passes, I've another holiday related item to share, which I've just learned from the writings of an expat. She states: "Halloween is considered an American celebration – and that’s not a compliment. The idea of French Halloween is seen as yet another imposition of American culture on French customs and traditions – right after American fast-food chains and ketchup. This alone is enough to make many French people turn their patriotic nose up at the idea of celebrating or embracing Halloween in France."

Because there is a french bistro proprietor in my hood on the UWS who sets out (every year around Halloween) an elaborately carved pumpkin (or "une citrouille" or "un potiron") atop one of his out door café's tables, I was surprised to learn this.

Whatever the case may be re Halloween and the proprietor of this french restaurant, I'm glad he puts out his uniquely carved pumpkin as it always seems to cheer even the most disgruntled passers by!