Today is Presidents Day, a holiday which I've written about it a few times in bygone years and this time, I feel I have nothing new to add to the conversation so I'll share a tidbit with you that I've just learned myself! On this day of February 16th in 1967, The Beatles released a single that featured Paul McCartney's, Penny Lane, on one side and John Lennon's, Strawberry Fields Forever, on the other.

In honor of the anniversary of the release of those songs, I've posted a You tube Video atop this entry which offers an interesting back story re McCartney's, Penny Lane.

As for the song, Strawberry Fields Forever, my connection is the fact that I'm familiar with an area in Central Park, that is named for the Lennon song and it is the inspiration for my kaleidoscopic photographic print, Rocks by Strawberry Fields (seen below), which can be found on in the Color Gallery within my web-site (patriciayoungquist.com), which is designed by Chris Deatherage. 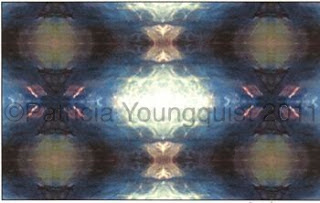 Chris's name is a familiar one to regular readers of this blog as he is the person who formatted my three volume book series (Words In Our Beak) seen below. He also wrote the press releases for each volume (see the left side bar of this blog) for each of them shortly after the books became available to the general public.


But getting back to Rocks by Strawberry Fields; the image can now be printed (by Fine Art America AKA FAA) on an array of surfaces for wall art and on to greeting cards, as evidenced below.


It can also be printed on items for personal use such as items seen in the next set of images.


There you have it dear reader, the inspiration behind McCartney's Penny Lane and the result of my being inspired by the rocks at Strawberry Fields.
Posted by The Last Leaf Gardener