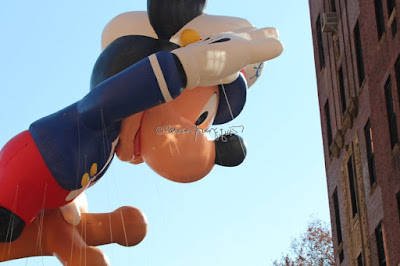 This past Tuesday I announced that an article of mine re the 2019 Macy's Thanksgiving Parade participants had been published by iLovetheUpperWestside.com on November tenth.

Now, a little over a week later, after my article appeared, I've been reminded that a comic character (Mickey Mouse) from a former balloon within the Macy's Parade turns ninety-one today!

He can be seen in the photo atop today's entry greeting the residents of an apartment building on Central Park West when he participated in the parade in 2012 (unfortunately he is not scheduled to appear this year).

According to a 2008 article by Claire Suddath, "Mickey's story starts with a rabbit."

Evidently, "Disney Brothers Studio was just another cog in Universal Pictures' animation machine when, in 1927, Walt Disney created a character called Oswald the Lucky Rabbit. With his round, white face, big button nose and floppy black ears, the smiling Oswald was an instant hit and Universal ordered a series of shorts. When Disney met with executives to negotiate another contract in 1928, the rabbit was still riding high and the animator thought he had the upper hand. Instead, the studio told him that it had hired away all of his employeees and retained the rights to Oswald. Univesral offered to keep Disney if he took a lower salary, but he refused. He and Ub Iwerks — the one loyal animator who stayed with Disney Bros. — returned to work and held a series of hair-pulling, late-night brainstorming sessions for Oswald's replacement. They shortened the ears, added some extra padding around the middle, and turned the rabbit into a mouse. Named Mortimer. The moniker didn't last; there are a number of tales attempting to explain how and why — the most popular being that Disney's wife hated the name and suggested its replacement — but soon he was ready for his debut as Mickey."

Re Mickey mouse, Suddath goes on to say, "In 1935, a young animator named Fred Moore gave Mickey his first makeover. Earlier animators had drawn the mouse as a series of circles, which limited his movement. Moore — who later animated Fantasia's Sorcerer's Apprentice segment — gave him a pear-shaped body, pupils, white gloves and a shortened nose, to make him cuter."

And, lookin' cute he (certainly) is, giving me cause to give him a heartfelt shout out by saying, "Happy Birthday Mickey Mouse, Happy Birthday to you!"
Posted by The Last Leaf Gardener