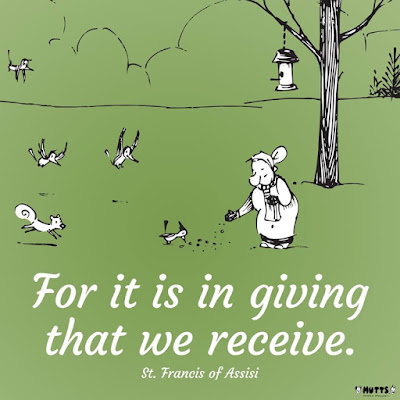 Today's entry is not part of the regular posting schedule I announced this past Monday, rather it is an extra posting which I mentioned might be something I will do from time to time.

My reason for today's entry is honor Saint Francis of Assisi. Today is his feast day! One of the ways I'm honoring the day is by sharing the cartoon by Patrick McDonnell that is posted atop this entry.

Among many things, Saint Francis is often remembered as the patron saint of animals; especially birds. I have a small statue of Saint Francis above my desk (seen in the image directly below).

His statue the one standing at the far left and serves as an inspiration for me to persevere in my work to help others learn about the needs avian community through my book series, Words In Our Beak.

Cam, the cardinal who is the story teller in my book series, Words In Our Beak, is so moved by this saint's passion for birds that she named one of her daughters Frannie in his honor. She can be seen in the following photos and in the latter, Cam is feeding her.

Additionally, Cam named another one of her daughters Pica-John, which also is a way of paying homage to Saint Francis. Pica was his mother's name and she had wanted to name her son John — not Francis!

As stated through Cam's voice in volume one, "... I have no photos of her, for she is even more camera-shy than her father, but I’ll tell you a backstory regarding how I chose her name, and the names of her siblings. I named my other daughter Pica-John, for Saint Francis of Assisi’s mother, Pica. I had not realized that Saint Francis’s mother had wanted to name her son John — not Francis — in honor of John the Baptist. It was Pica’s husband who wanted to name his son Francis. Pica’s husband’s reason for this was he had just returned from a successful business trip to France.
This historical event was not lost on me since I am somewhat of an advocate for the rights of female birds. Up until now, I have not been able to do much for my feathered comrades’ rights, but I can in solidarity towards my gender, name my daughter, Pica-John."

Because of this daughter's aversion to the camera, I also had no pictures of Pica-John to include in volume one or volume two, but Frannie was able to persuade Pica-John to allow her photograph to be included within volume three, as it is the last volume of the series, seen below, where Cam continues to be a cover girl.

But getting back to Saint Francis, since, after all, TODAY IS HIS feast day, many churches throughout the world will be offering a Blessings of the Animals in honor of the feast day. If you have an animal, dear reader, and are interested in having him/her blessed, I encourage you to google churches in your area that may be offering this "service."

Some churches, such as the church of Saint John the Divine (on the UWS Manhattan) will bless animals on the first Sunday (which in this calendar year will be October 6th) following Saint Francis's Feast Day.
Posted by The Last Leaf Gardener