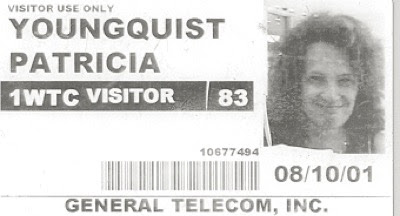 It's already the eighteenth anniversary of the September 11th terrorist's attacks! As I've stated in my prior entries re this tragedy, I interviewed for a job at One World Trade Center, just thirty-one days prior to the terrorists attacks: August 10, 2001.

Prior to the General Telecom interview, I had been given a gift certificate for a pair of shoes to wear to the place and I wasn't quite used to wearing any type of heel, which got stuck in the middle of an elevator door as it was about to close on m

Moreover that summer day became one of the hottest temperature days on record. By the time I got to the right office, I must've looked like I was dripping wet because some woman, with lipstick on her teeth, who was also in the waiting area offered me a paper-cup of water.

Then the receptionist, Margaret Mattic, escorted me into the office of Lashawana Johnson, who interviewed me for the position. Ms. Johnson mostly spoke about how she enjoyed coming to work early in the morning to shop for her children and she indicated the many pictures of them that she had on the walls of her cubicle.

Later that night or maybe it was the next night, I received a phone call from a night shift manager who identified herself as Carmen. She informed me that I was not chosen for the position.

A few weeks later, terrorists flew planes into the Twin Towers, hitting the one where I had interviewed first. When I heard the news I was on the phone with Verizon, and I immediately thought about the fact that Ms. Johnson loved the morning hours at One World Trade, and I was certain she had died.

A few weeks later, I was able to Carmen that indeed Ms. Johnson had died as had Margaret Mattic.

Evidently because Carmen worked the nightshift, she had been home resting that morning and she informed me that she lived in Brooklyn, in an apartment with a view of the Twin Towers, and had seen the planes fly into them, murdering all her morning co-workers at General Telecom Inc.

I know of others who perished on that day, including Josh Rosenthal, who lived in a building adjacent  to my courtyard. The same building my beloved friend Victor was living in at the time.

I will always think of Margaret, Ms. Johnson and Josh and those near and dear to them (especially Carmen) on this solemn day. I will also always be mindful of the many others who lost their lives on September 11, 2001 and of the loved ones they left behind.
Posted by The Last Leaf Gardener