Two weeks ago (July 30) in my 136th segment for my Tuesday's Truths series, I stated, "....As for my completing my projects, my work was truly disrupted by an unexpected major upheaval in my rooftop garden and at this time, I cannot even write about it, but I will do so in a few days, dear reader, after I've had time to deal with today's unfortunate situation..."

Now, before too much time passes, I'm using this week's Tuesday's Truths "episode" to catch up where I left off in that posting and tell you a little bit more about that unfortunate situation, which for now (and hopefully for the long term been resolved).

The situation I referred to in my July 30th entry is the fact workmen showed up on that day to replace the building's gutters (a repair that had been long overdue) under my rooftop garden (which is atop a roof extension). Their plan had been to attach a ladder to the railing around my garden, remove the old gutter and replace it.

However, it turned out the railing is probably too weak to support a heavy ladder being attached to it, so they let me know they had to return the following day (July 31) and temporarily remove part of my railing.

Preparing for another day of workmen in my midst during a tremendous heat wave meant even more postponements in my being able to make progress on my proposal for Steidl as well as complete my manuscript (Imperfect Strangers) and produce a video update for it.

But since there was nothing I could do to work on my projects because they require my full attention, I took on a mindless task of going through a box of papers related to my notes for Neurofibromatosis (NF) which is what Imperfect Strangers is based upon.

As I was going through my notes on that extremely hot day of July 30th 2019, I came across a note that I had written to my maternal grandmother nearly ten years before she died. A copy of it can be seen  below: 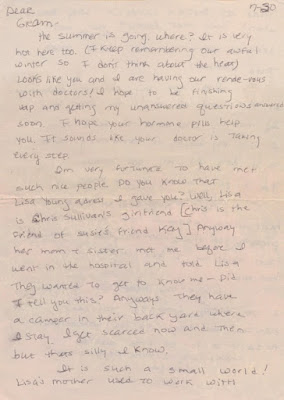 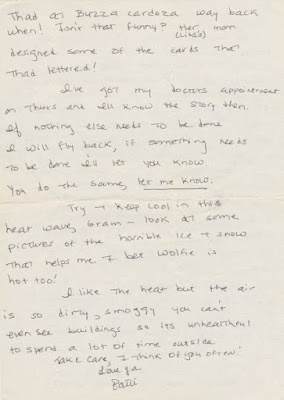 I had written it to her from a place that I was staying in California where I had traveled to have medical tests to determine if I had an acoustic neuroma, which is a symptom of NF. Doctors had reason to believe I did had one, but at that time, there were was not a doctor near to where I was living who could make the proper determination and/or treat it.

In any event, on Tuesday, July 30th, as I was going through these papers, I noticed the day I wrote her this letter was during the late 1970's (probably 1979) and written on the day of July 30th — forty years ago.

Also in that box of papers, I came across a certificate (a copy is also included in this past Wednesday's blog post). 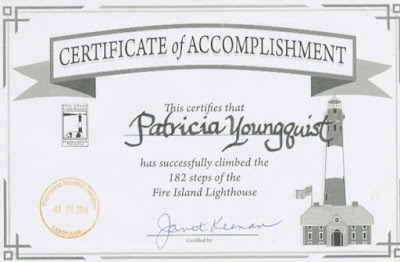 What I said (re this certificate) in the aforementioned entry which (as you can see) was given to me on July 30th of 2014 (five years ago ) is "I hardly consider climbing 182 stairs accomplishment because I climb that amount of stairs on a regular basis because I live in an apartment that can only be accessed  by climbing 70 stairs which I do a few times a day!"

Hence, because it was on July 30th 2019 that I came upon papers related to this day and month, I titled today's entry, That was the day that was! Tuesday's Truths WK 138 in honor of an old television program called That Was the Week That Was.

Wiki explains that this program was "informally TWTWTW or TW3, is a satirical television comedy program on BBC Television in 1962 and 1963. It was devised, produced and directed by Ned Sherrin and presented by David Frost. An American version by the same name aired on NBC from 1964 to 1965, also featuring Frost."

And now getting back to the upshot of the gutter repair that began on  7/30, the workmen did return the following day, but thankfully they only removed a portion of the railing, but in doing so a portion of kiwi vines which wrap around it were destroyed, as you may surmised from the following photo. 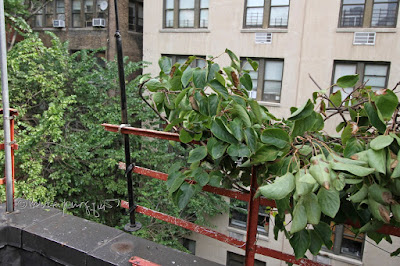 I have had my kiwi vines since 2010 and it was hard to watch them being treated so roughly.

Moreover, prior to this calamity, my H.F. Clematis (which grows on a pole that is off camera in the image above) may have been partially destroyed. I've had that vine since 2005 (or 2006?) and it is upsetting to see her manhandled, but, as is the case with my kiwi vines.

I am now grateful to report the railing is back (albeit charred from the removal and subsequent fire-based construction to replace it) but the kiwi vine and H.F. Clematis lost a lot of their growth as seen in the next image. 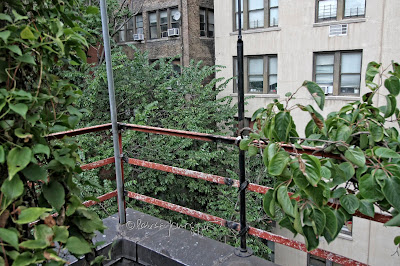 My rooftop garden is not only an oasis for a number of birds and for me and those who come visit; it is also the setting for my book series, Words In Our Beak.


Therefore, I'm thrilled (another understatement) to report that when Juan V came here last week, he was able to get my garden back in good shape as evidenced in the next two pictures which show partial views of my place (north and south respectively). 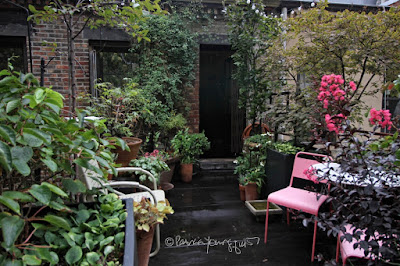 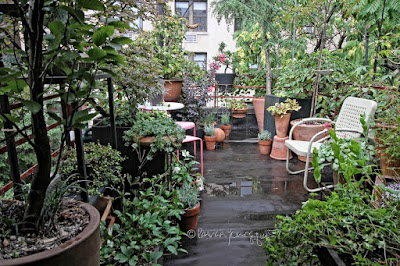 Having my garden back in place will be a great help in my being able to put my attention on the proposal for Steidl. As for Imperfect Strangers, the other week I received an email from the publisher that if I want to be considered, I need to get everything to them by August 30th 2019, and of all goes well, I should be able to submit my book by then and after doing so, work on a follow-up video for You Tube and Vimeo.
Posted by The Last Leaf Gardener