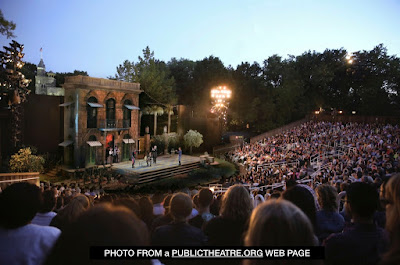 The photo atop this entry is a view of The Delacorte Theatre (located in Central Park) and is a copy of an image on one of the Public Theater's  web-pages. The Public Theatre is the company who oversees productions at the Delacorte. "Since 1962, over 5 million people have gathered inside the Delacorte to experience world class Shakespeare and other productions at no-cost. The mission of The Public and Free Shakespeare in the Park has remained constant."

Over the years I've seen a number of theatrical productions at The Delacorte although it has been a number of years since I've done that. This is because my interest has been in the "productions" that take place outside that theatre in Turtle Pond as well as on the grounds of Turtle Pond; which are both in close proximity to the theatre as seen in the following aerial photo which is from the aforementioned web-site. 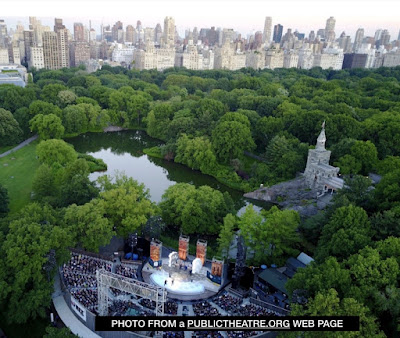 I have doctored the image in the copy below to provide some context about  a production I saw this past Tuesday. 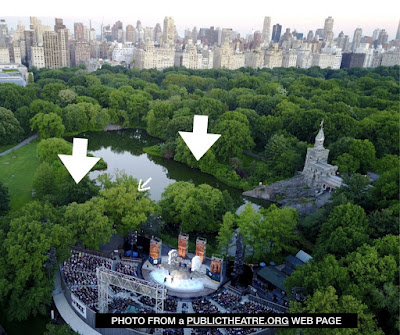 The smallest arrow affixed to the picture is referencing an area where a deck is located and it is a place where a number of people go to observe turtles, fish and birds swimming in Turtle Pond; the pond seen in this image.

In any event, this past Tuesday night as a production was going on inside The Delacorte, I was watching a show put on by a Great Egret (seen in the next photograph). This bird was located near the area indicated by the chubby arrow I affixed to the righthand side of the image. He/she is probably the same egret I saw on June 26th which I wrote about in a blog post). 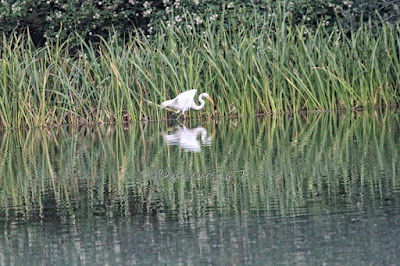 If I didn't know better, I might conclude that the Great Egret seemed to be waving at me, as you might also surmise from looking at the next picture. 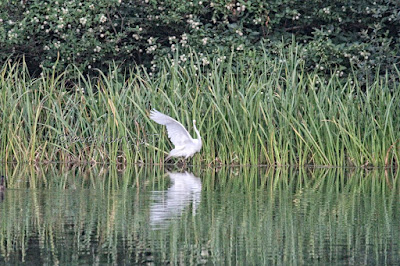 But perhaps the egret was putting on his/her show for some Mallards who were out for a swim. 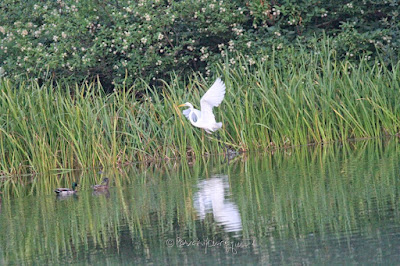 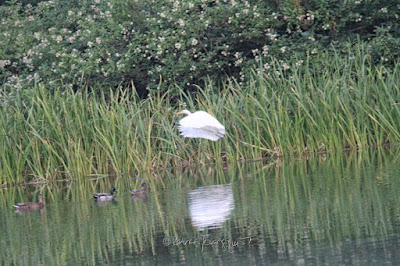 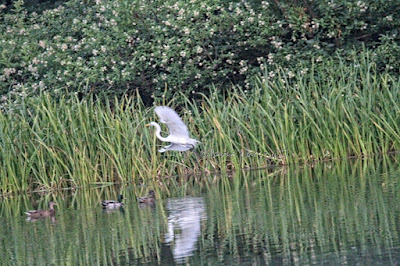 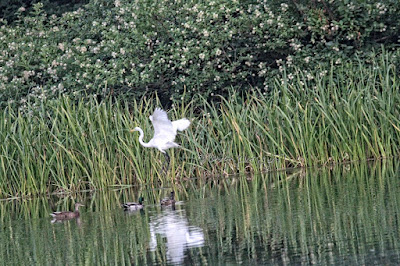 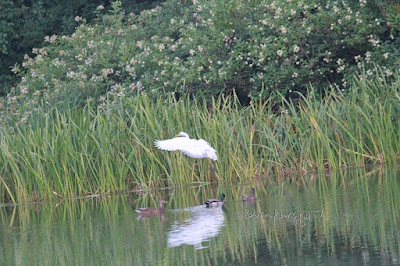 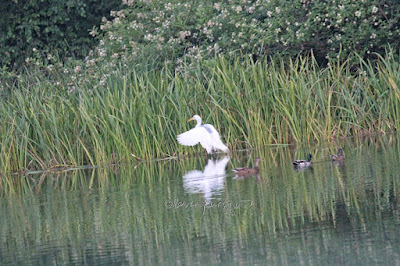 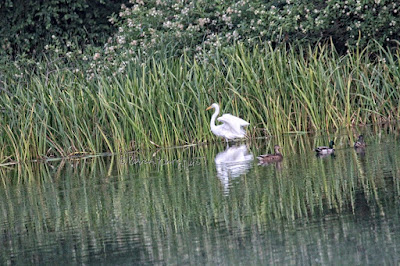 However, as you can see, the Mallards were not impressed with the egret's theatrics. But I certainly enjoyed the "show" and after egret's performance I struck up a conversation with a man who  hd been there to photograph a Kingbird who was alighting on some treetops on the grounds of Turtle Pond, indicated by the chubby arrow I affixed to the lefthand side of the third image in this entry.

At that hour of the night, I was unable to see the kingbird even with the help of my long camera lens, but the man I met (a very talented photographer) was able to take a picture of him/her (with my camera) and I've posted it below. 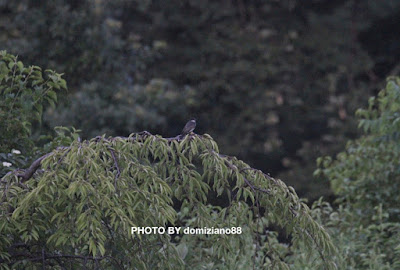 As you can see the darkness of the night was not an optimum condition for photographing a darkly colored bird but thanks to the stranger I now have an idea of where to look for this avian  creature should an opportunity present itself.

In terms of my having a good picture of that Kingbird, at this point, I will once again return to the opportunity to heed the wisdom of E.B. White's beloved aunt who evidently once told him, "Remembrance is sufficient for the beauty we have seen."

Such wise words and ones that may be familiar to those who read my blog as I've discussed them in a few of my past entries, including one I published a litle over three years ago.

And speaking of E.B. White, he was born on this day of July11th in1899 (and passed away on October 1, 1985). I'm very grateful for his legacy of published words. I'm so thankful to have made his acquaintance through his writings and aspire to leave a similar legacy with mine.
Posted by The Last Leaf Gardener