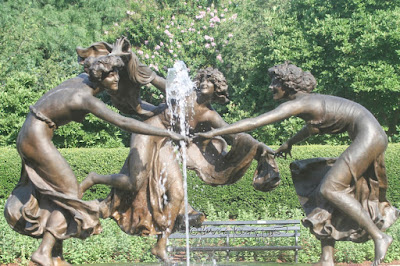 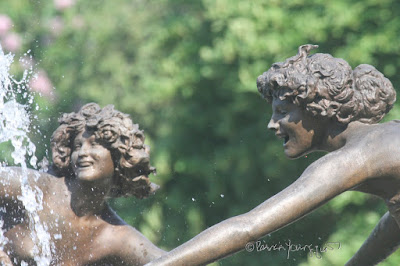 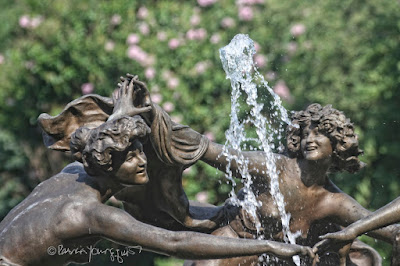 As I have mentioned a number of times here on Blogger any time it is a Saturday and I'm in either Riverside Park or Central Park, I find myself thinking of the hit song Saturday in the Park by the rock band Chicago, and today was no exception.

Even though NYC (as well as much of the United States) is undergoing a dangerous heat wave, I took my weekly early morning walk with a friend (CF) and when we walked through Central Park and spent time in The Conservatory Gardens near the area where the Untermyer Fountain (seen in the images atop this entry) is located.

According to a web-page for The Central Park Conservancy, "The sculpture came to Central Park in 1947 after the death of Samuel Untermyer. It is a cast of the original. Just how Untermyer acquired the sculpture from the Berlin original or had the cast made remains a mystery. It was donated to the Park by Untermyer's children and was originally at his estate in Yonkers, New York. Completed before 1910 in Germany, Walter Schott's Three Dancing Maidens depicts a circle of three young women whose dresses cling to their wet bodies as if they were perpetually in the fountain's spray. One larger jet of water is featured in the middle of their dance, while two smaller jets appear on either side of the oval pool. The circle of the sculpture and base and the ellipse of the pool complement the slightly oval-shaped garden itself. Today the fountain is a joy to those who visit the Conservatory Garden, especially in spring amidst the tulip display, in early May, and in the fall when the Korean chrysanthemums bloom."

Seeing these sculpture-girls playing in water was somewhat cooling and we also were able to take in other sights within The Conservatory Garden such as a lone butterfly who can be seen in the next series of photographs. 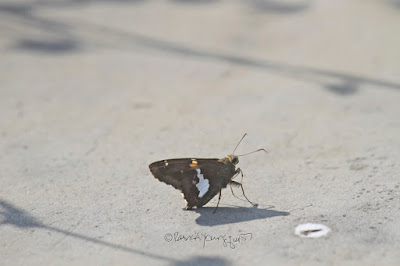 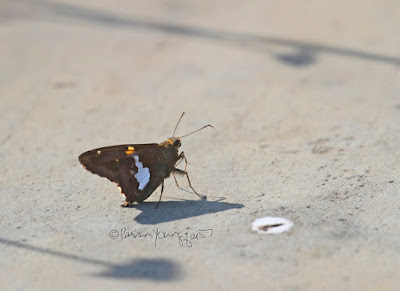 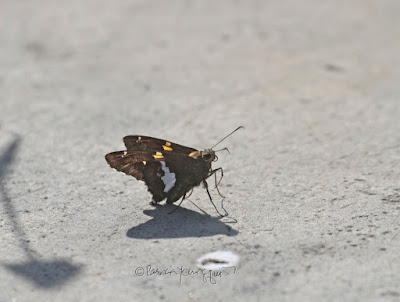 Upon my return home I did extensive research in hopes of finding the butterfly's ID but I could not find any information. I am so grateful that Susan Ryan was able to forward me the name of this insect, who it turns out is a Epargyreus clarus (AKA silver-spotted skipper).

A Wiki web-page has this to say re the silver-spotted skipper variety: "...is a butterfly of the family Hesperiidae. It is claimed to be the most recognized skipper in North America. E. clarus occurs in fields, gardens, and at forest edges and ranges from southern Canada throughout most of the United States to northern Mexico, but is absent in the Great Basin and western Texas.

E. clarus larvae create and reside in unique shelters stuck together with silk, which do not protect them from predators. Natural predators of the species include paper wasp foragers, sphecid wasp and Crematogaster opuntiae ants.The species is also considered to be a perching species, meaning that adult males compete for territory to attract females.[6] Although E. clarus is considered to be a pest of a few crop plants such as beans, its pest activity is not serious enough to warrant initiating major control measures."

Prior to this my experience seeing a butterfly in action has been with the Polygonia interrogationis (AKA Question Mark Butterfly) and an American Lady, who is featured in volume one of my book series, Words In Our Beak.


I appreciate all the beauty I was able to see on this day before the heatwave really settled in which it rapidly did (and continues to do) after I returned from my Saturday in the park. Time to cool off with Walter.