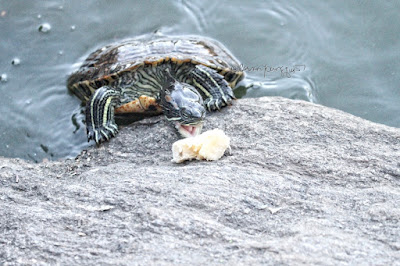 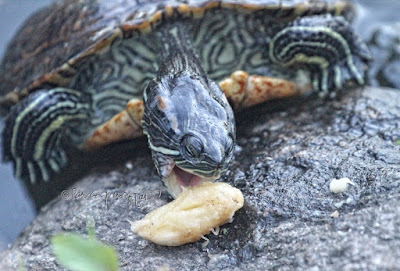 Last In a recent posthere on Blogger, I discussed some reasons that turtles pile up on top of each other as I've seen them do when I am in Central Park. A few days after I published that entry, while taking a walk in by the park's lake, I saw these creatures partaking in another activity which I have witnessed them doing on a few occasions: they were eating bananas, which they throughly seemed to enjoy as evidenced by the pictures atop this entry.

The first time I came upon a turtle munching on a banana, he/she was being fed by a visitor to the park who mentioned that in his past life he had been a turtle which is how he knew these reptiles like this fruit.

My thought was they may like the fruit, I thought, but is it good for them? I satisfied my concern by going to Goole to do some research and found many articles re turtles eating bananas. One web-page has this to say: "In the wild, turtles love to munch on anything they can find; often they will feast upon things such as insects, fish, bananas, and strawberries in nature.  However something important to keep in mind is that turtles should never have too much of one type of food, and should only be given fruit on rare occasions if not at all.

Fruit has a high amount of sugar, which could be harmful to the turtle if fed too frequently.  The sugar content and acid, etc. in fruits can cause a turtle’s stomach to bloat up and cause pain, as well as diarrhea and a number of other health problems.

Some pet owners have found that only feeding their turtles bananas on rare occasions is the best method and that mixing it with a varied diet helps.  Experts have suggested that bananas every now and then for a turtle can be a healthy choice."

It seems the "everything in  moderation" theory might apply in this instance. My fascination with seeing turtles eating a banana as well as moving toward the fruit should not come as a surprise to you, dear reader. 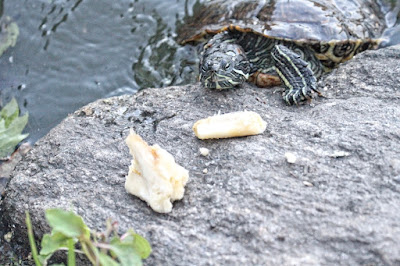 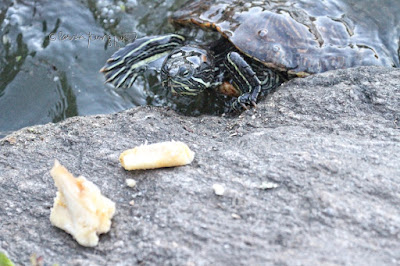 After all, I've mentioned on a number of occasions it is their shells which are the inspiration for my kaleidoscopic photographic print titled Turtle Pond, which is pictured below...


... and is available in many sizes via Fine Art America (or FAA) who can print wall art on an array of surfaces (wood, canvas, acrylic, metal and more) as well as on items for the home (including pillows and duvet covers), plus FAA can print images on for personal use (such as tote bags and greeting cards).

These items make for a great Father's Day gift to give anyone who is a father. That holiday is less than one month away! And with that dear reader, I encourage you to get these items as gifts and to take advantage of learning what is ok and not ok to be included in a turtle's diet.
Posted by The Last Leaf Gardener