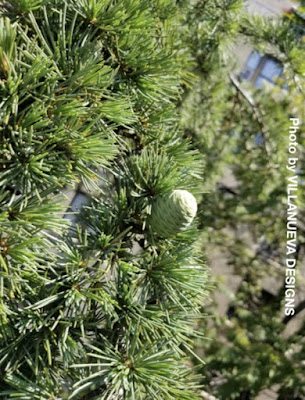 The photograph atop this entry as well as the ones directly below were taken by JV (Juan V) after he spotted a pinecone on the  Japanese Larch (Larix Kaempferi) which is located in the northeast corner of my rooftop garden. 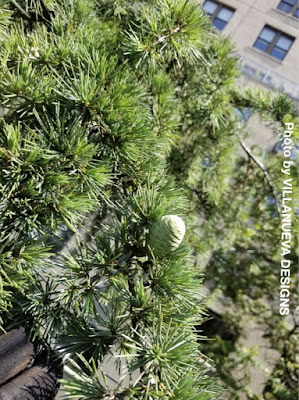 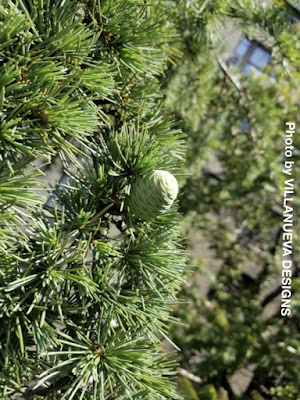 I've never seen a pine cone when it was in the early stages of life and was so fascinated by Juan's discovery that I did a bit of research to learn more about them, which is my wisdom for Wednesday.

According to an article by Natalie Andrews, "Pine trees, also known as “conifers,” have cones instead of flowers. These cones serve as a pine tree’s source of seed. Conifers also produce separate male and female cones for seed development. In general, the development of a pine cone takes around two years and fertilization happens in the spring. Both male and female cones start like tiny pink-lilac bristles.They turn green as they develop, but their scales stay tucked together until maturity. When fully mature, female cones look like typical pine cones, with hard brown woody scales spread apart. They form at the foot of new shoots below the terminal bud and take about two years to mature and produce seeds. Each female pine cone has about 200 seeds, depending on the pine's species... " (You can read the rest of Andrews article by clicking here).

My Larix Kaempferi is much appreciated by me as well as by the array of birds who have spent time in her branches and or just admiring her foliage; as evidenced in the following photographs featuring Mac, a male cardinal...


an array of European starlings....


and Harper, a Northern mockingbird.


This larch and all of the avian creatures you see here (plus many more) are featured in my three volume book series, Words In Out Beak.

The stories in these books are set in my garden and told from the perspective of Cam, a female cardinal, who is featured on all the covers.
Posted by The Last Leaf Gardener