Today I got delayed  due to preparing for upcoming meetings so this entry will be short. First let me say, I have been posting on this blog for nearly nine years and I've never published an entry on a Saturday night! Since that is what I'm doing now, I hope Saturday night's alright for posting which makes me think of Elton John's song, Saturday Night, and in honor of the fact, I've posted a You Tube Video featuring it atop this entry.

In any event, earlier today while in Central Park, I came upon numerous (probably hundreds) of turtles in Turtle Pond.

I took a few photo-ops of the creatures I saw and they can be seen in the following pictures. 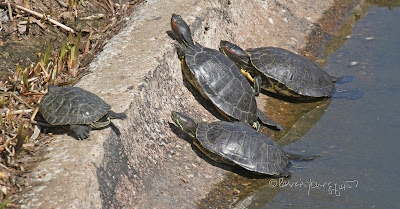 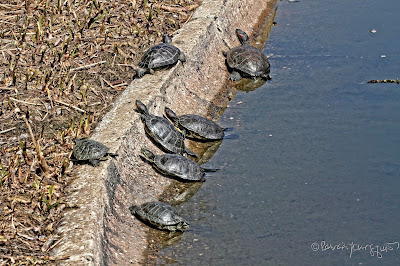 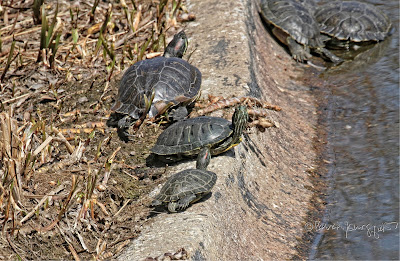 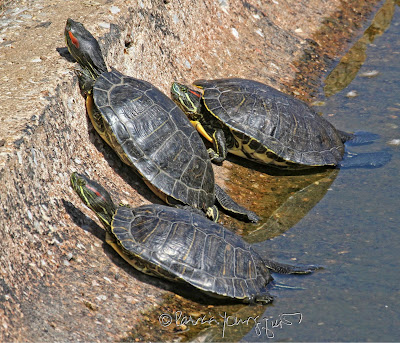 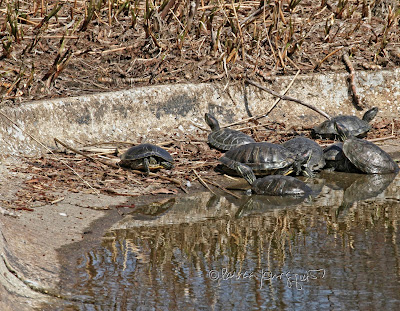 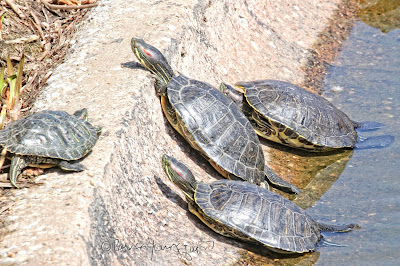 The patterns of various turtle shells were the inspiration for my kaleidoscopic photograph, Turtle Pond (seen below in a copy of an image from my website)...


...which I've written about in previous postings here on Blogger when discussing things related to Central Park's, Turtle Pond. In fact, years ago when I first began creating kaleidoscopic images, I set up a website called Turtle Pond Art, and based it on the fact that I was coming out of my shell as an artist.

However, at the suggestion of others who thought I needed to use my name in order to be found, that particular website was pointed to the one I have now and eventually it was phased out. Be that as it may, as of now, my kaleidoscopic image of the the turtles in the park's pond can be found within one of my galleries on my website (once agin that's patriciayoungquist.com) and also in my kaleidoscopic collection on Fine Art America (FAA) who can print it on an array of surfaces.*

Meanwhile, I realize that I'm hardly the only one inspired by turtles, here's Mary Oliver's poem (THE TURTLE) about them:

breaks from the blue-black
skin of the water, dragging her shell
with its mossy scutes
across the shallows and through the rushes
and over the mudflats, to the uprise,
to the yellow sand,
to dig with her ungainly feet
a nest, and hunker there spewing
her white eggs down
into the darkness, and you think
of her patience, her fortitude,
her determination to complete
what she was born to do----
and then you realize a greater thing----
she doesn’t consider
what she was born to do.
She’s only filled
with an old blind wish.
It isn’t even hers but came to her
in the rain or the soft wind
which is a gate through which her life keeps walking.
She can’t see
herself apart from the rest of the world
or the world from what she must do
every spring.
Crawling up the high hill,
luminous under the sand that has packed against her skin,
she doesn’t dream
she knows
she is a part of the pond she lives in,
the tall trees are her children,
the birds that swim above her
are tied to her by an unbreakable string.

There are many good lessons I could learn from turtles-- their slow, deliberate movements, their perseverance in taking small steps to get where they want to go, their ability to stay still and silent when basking in the warmth of the sun.

The turtle "doesn't dream/she knows."  I dream, I don't know, at least not most of the time.

But every once in a while, I do feel the trug of the unbreakable string.


What were you born to do?

How do you see yourself as a part, rather than apart, from the world?

And with her beautiful poem, I'll leave the post as I began with a song.

There once was a musical group who called themselves The Turtles. In the You tube video posted below, they can be seen performing one of their hits, Happy Together, which the turtles whose pictures I've featured here seem to be while sunning themselves in Central Park.